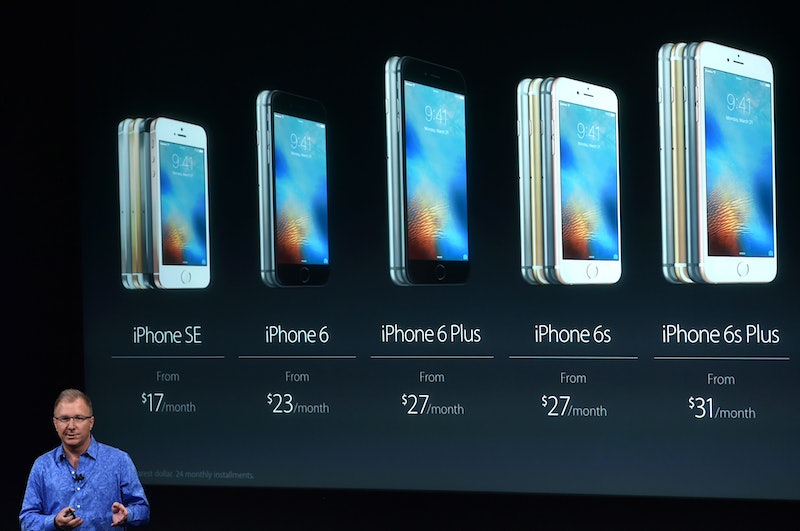 iPhone releases are notoriously exciting. In years past, impatient Apple fans have camped out overnight and waited in seemingly endless lines to be among the first to have the latest model. Even though this mania is less widespread nearly a decade after Apple premiered the iPhone, new models still prompt much speculation. Recently, there have been proliferating rumors about the iPhone 7, which is due to come out in September 2016, as well as about it the iPhone 7 Plus, which will reportedly not be released until 2017.

However, according to Forbes, the most substantial change coming with the release of the iPhone 7 will be the lack of it. In fact, the iPhone 7 won't look much different from the 6S. In the past, new models have looked entirely different from their predecessors — the 6 had a much larger screen than the 5, the 5 was considerably thinner than the 4, and so on and so forth. Furthermore, Apple typically releases two phones — one original and one slightly revised model for each generation, such as the 5 and 5S and the 6 and 6S.

However, this time around, the iPhone 7 will most likely have a lot more in common with its predecessor than with 2017's 7 Plus. But the new iPhones are still worth getting excited about. Here's what you might be able to expect from the iPhone 7 and 7 Plus.

New iPhones will no longer have a headphone jack. Instead, you'll plug your headphones into the lightning port — the same port used to charge the phone. Perhaps it will prompt wireless headphones to become more popular?

The iPhone 7 will most likely be even thinner than the already-wafer-thin iPhone 6 and 6S.

Forbes also speculated that the iPhone 7 will have more than one speaker, making for a considerably better listening experience.

It is widely agreed that the iPhone that will be released in 2017 will have a AMOLED (Active Matrix OLED) screen. Rather than the current iPhone's LCD (liquid crystal display) screen, the iPhone AMOLED screen would be lighter, thinner, and more flexible and energy-efficient, according to CNET.

MacRumors is speculating that the iPhone 7 Plus (and possibly even the iPhone 7, too) will have a dual-lens camera. Essentially, this would make iPhone photos look quite similar to those taken with a DSLR camera.

It's hard not to be excited about the prospect of a new iPhone, but for now, all you can do is wait until Apple releases more information about its next generation of phones. The tech world is speculating that this will take place on Sept. 13, 2016.

More like this
This App Tells You If Your Skin Care Products Are Working — So I Tried It
By Amanda Ross
Remember These Ancient Pieces Of '90s Tech?
By Lucia Peters and Emma Carey
How To Support Gun Control Reform Right Now
By Morgan Brinlee and Carolyn Steber
The 4 Best Fitbits For Sleep Tracking
By Tiana Crump and Lauren Moison
Get Even More From Bustle — Sign Up For The Newsletter