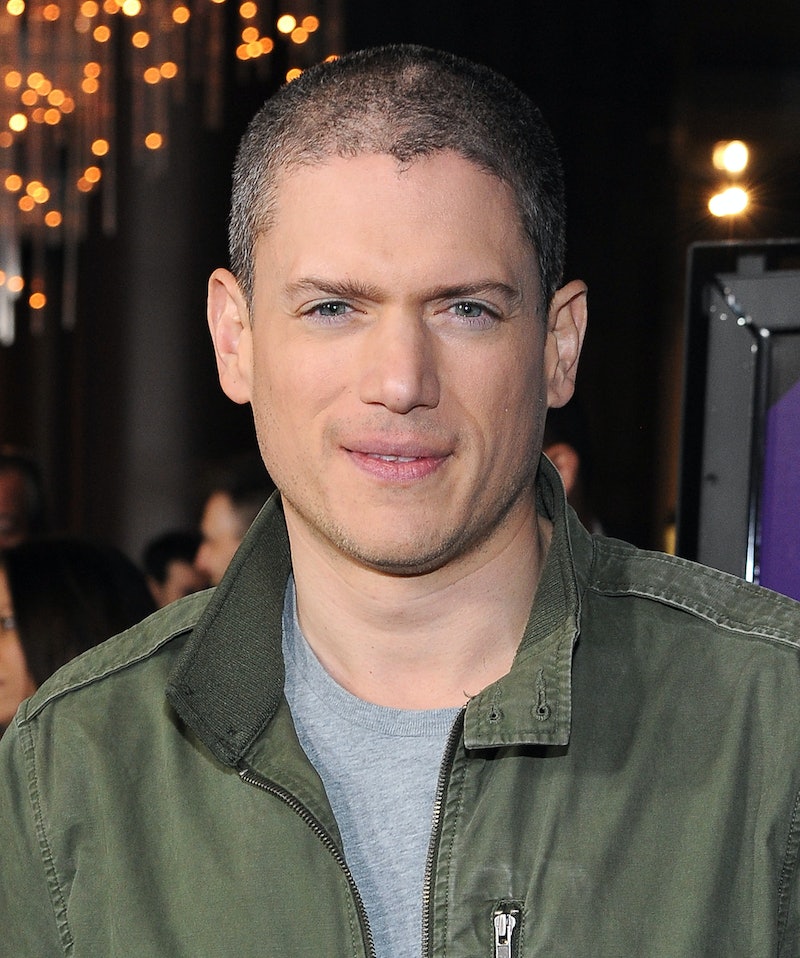 Being a celebrity in 2016 seems to go hand in hand with becoming a meme. But Wentworth Miller turned a body shaming meme about himself into an important message about mental health and body image. Recently, the Prison Break star fell victim to a cruel and arguably pointless meme by The Lad Bible, a UK-based website that's been accused of sexism and of objectifying women repeatedly. But his response was a reminder that body shaming — whether being directed at someone who struggles with mental health or not — is never acceptable.

In this particular instance, Lad Bible shared a side by side composite of actor and director Miller on its Facebook page: A Prison Break promotional picture alongside a paparazzi shot of the star from 2010. The caption was a typical case of "classic banter:" The excuse often given by many individuals to make their prejudicial statements seem like innocent jokes, simply because they "didn't mean it." As for the image of Miller, the focus of the derogatory image was put on his weight. The caption read, "When you break out of prison and find out about McDonald's monopoly."

This type of body shaming humor is basic at best and degrading at worst. Thankfully, the actor refused to let the comments slide and chose to take the opportunity to open up a dialogue about mental health, including his own experiences and struggles with depression.

Commenting on his post, which included said offensive meme, Miller tracked through not only his experiences with mental health, but with his comfort eating and weight gain in times of depression — an issue that has been in the public eye recently what with Rob Kardashian's similar struggles with mental health and weight gain. Miller discussed his own experiences with honesty, writing:

In 2010, at the lowest point in my adult life, I was looking everywhere for relief/comfort/distraction. And I turned to food. It could have been anything. Drugs. Alcohol. Sex. But eating became the one thing I could look forward to. Count on to get me through. There were stretches when the highlight of my week was a favorite meal and a new episode of TOP CHEF. Sometimes that was enough. Had to be.And I put on weight. Big f*cking deal.

It's admirable that Miller didn't describe his weight gain in a particularly negative way, choosing instead to focus on how he had much more important things to worry about: his mental health, mainly. When he looks back at these paparazzi images of himself at a bigger size, he actually enjoys them. He added, "Now, when I see that image of me in my red T-shirt, a rare smile on my face, I am reminded of my struggle. My endurance and my perseverance in the face of all kinds of demons."

Although the point of Miller's Facebook post was primarily to shed light on mental health, it also served as a great reminder against the dangers and evils of body shaming — regardless of malicious intent or not.

In response to the post by Miller and the surrounding fury of the public, The Lad Bible issued a statement apologizing for the harm caused by its body shaming meme, and shared a list of mental health helplines that are available to assist those in need.

Although the apology showed detailed remorse for impacting Miller's mental health, as well as for anyone else who was hurt by the post, it still lacked any mention of the body shaming that triggered the debate. The Lad Bible has not yet responded to Bustle's request for comment.

While I congratulate The Lad Bible for the courage and humility it took to simply apologize and take credit for the site's mistake, I feel that the mistake itself hasn't been recognized to its full extent. The Lad Bible has yet to acknowledge that it produced a body shaming meme. Ultimately, whether or not Miller's weight gain had been a result of mental health struggles or not, dissecting and mocking the bodies of others should never be acceptable.

By not addressing the body shaming that caused the entire debate, The Lad Bible has unfortunately suggested that body shaming is only unacceptable when mental health is at play.

What I can only hope people take away from this is that mocking anyone, regardless of their celebrity status, is always going to be a shitty thing to do. We can never know people's backstories. We can never know how our words might affect them. We can never know the extent of damage a seemingly harmless Internet comment can make. But we can try to do better.

More like this
What’s The Kibbe Body Type Test That’s All Over TikTok?
By Marilyn La Jeunesse
Halsey Calls Out Body-Shaming Comments On TikTok Amid Health Issues
By Jake Viswanath
Bustle Newsletter: May 6, 2022
By Stephanie Talmadge
10 Talc-Free Makeup Brands For Safer Eyeshadows, Powders, & More
By Audrey Noble
Get Even More From Bustle — Sign Up For The Newsletter