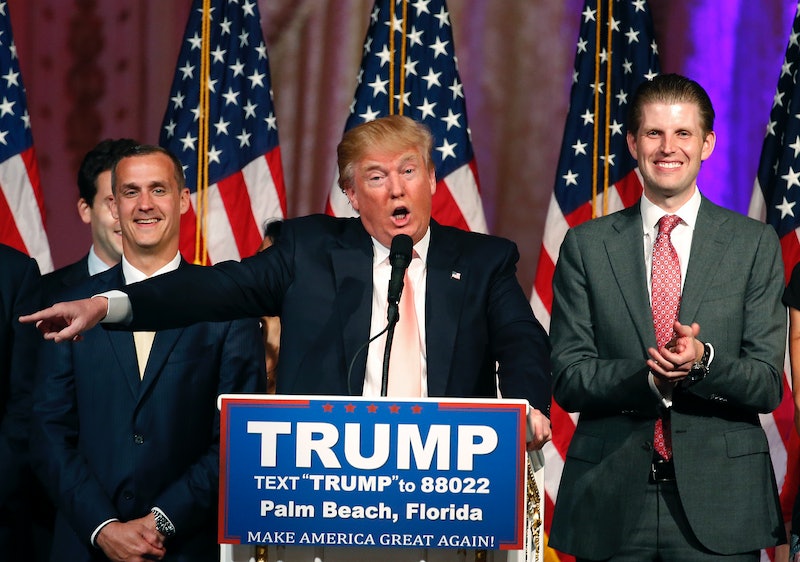 On Tuesday, some pretty unwelcome chickens came home to roost for Donald Trump's presidential campaign. Police in Jupiter, Florida officially announced that Trump's campaign manager, Corey Lewandowski, has been charged with battery. The charge stems from an incident on March 8, in which ex-Breitbart reporter Michelle Fields accused Lewandowski of yanking her by the arm, leaving bruises, while she was trying to question Trump. Lewandowski and the Trump campaign deny all allegations of wrongdoing But now, with legal troubles in the air, there's an obvious question to be asked: Why didn't the Trump campaign simply apologize to Fields for whatever did transpire to begin with, and put all this behind them?

According to Fields in her interview with Fox News' Megyn Kelly, that was what she was initially expecting. She repeatedly stated that she "didn't want to make a big deal out of it," and hadn't planned to file a police report, instead simply informing her editor what had happened. She also said that Trump spokesperson Hope Hicks asked for her phone number and said that she could expect an apology. But that didn't happen. Instead, in the days to come, the Trump campaign painted Fields as a fabricator and an attention-seeker, and Trump himself told a national CNN audience that she might have made the whole thing up.

On Tuesday, along with announcing the charges, Jupiter police released surveillance footage showing the incident from the clearest and most obvious angle yet. You can watch it in the tweet embedded above. Suffice to say, things do not look good for Lewandowski and Team Trump right now. Which, of course, gets us back to that same question. Why not just apologize to Fields and keep things moving? By her account, it seems as though that would've been the end of it.

But that's the thing about Trump. If you're looking for a single guiding ethos for how he's behaved throughout this campaign, the best one might be the title of Mitt Romney's old book: No Apology. Trump has gotten this far largely by flooding the news cycle with one ridiculous, wildly inflammatory story after another, making sure that no individual topic gets too much play before swapping it out for a new one.

And all throughout, there's been shockingly little backtracking. And even when there is, virtually no contrition to go along with it. When Trump demeaned Arizona senator John McCain because he was captured in Vietnam? No apology. When Trump compared Ben Carson to a child molester? No apology. When Trump spent first days, then weeks, and now months blaring misogynistic vitriol against Megyn Kelly on Twitter, resulting in a flood of verbal attacks and reportedly even death threats against her? No apology.

It's one part of what makes his political rise so terrifying for his opponents and critics, and also what makes him so tantalizing to his supporters ― his refusal to ever back down, even when every standard of decency is aligned against him. And, of course, the willingness to hit back against any criticism with a far stronger, harsher attack. The problem with that approach, however, is that if you back off even a little, all the angry appeal starts to crumble into dust.

And in the case of Fields and Lewandowski, it sure seems like this same guiding principle was operative. Faced with a allegation of physical abuse from a reporter who even had an on-the-record eyewitness in Ben Terris of The Washington Post, it would've been so, so easy just to make an earnest apology and try to mend fences. Instead, they went to war in the media, and now the story has now blown up in a way it almost certainly wouldn't have before.

The Trump campaign continues to deny that Lewandowski did anything wrong, and they released a statement following the announcement of the charges against him, saying that "Mr. Lewandowski is absolutely innocent of this charge" and "is completely confident that he will be exonerated."

Obviously, whether this affects Trump with voters remains to be seen, as his floor of support has been pretty unshakable thus far. But this does appear to be a somewhat unique and volatile situation for him. While the broad strokes of the situation are familiar, he's not really able to drive this conversation the way he normally has. To this point in the campaign, he's been masterful at manipulating news cycles, but as Bloomberg's Sahil Kaptur noted on Twitter following news of the Lewandowski charges, things seem to be getting harder for him to control lately.