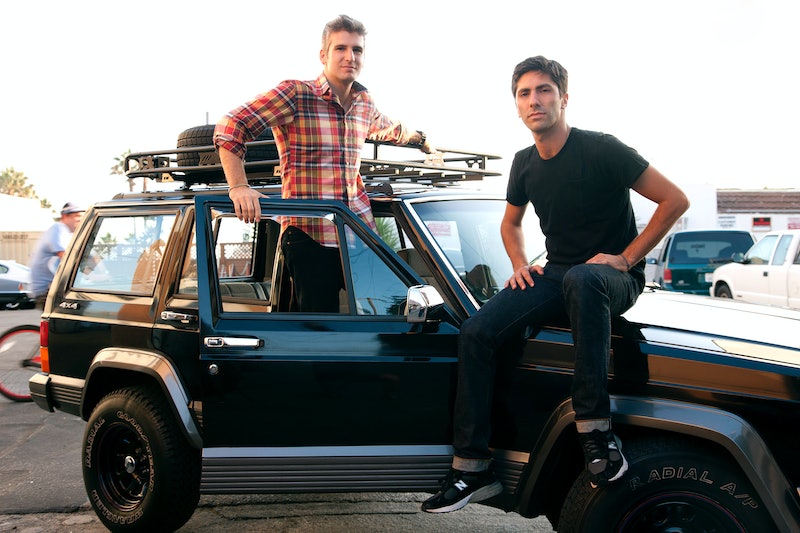 The latest episode of Catfish is taking a page out of the Sleepless in Seattle screenplay — a lonely single dad reaching out in hopes of finding a new relationship. And the episode's preview shows that while he thought he found love, Catfish pair Micheal and Chanelle may not be the match made in heaven that he thought, since she disappears. Of course, since the two have never met in person, Michael decides to contact Nev and Max, Catfish-busters. And while it sounds like a classic Catfish story, with an Internet girlfriend who mysteriously avoided video chat, claimed that she was moving, and then vanished, there's no end to the surprises on Season 5 of the MTV series, so who knows — maybe Chanelle has a legit explanation for her disappearance.

After last week's shocking surprise that Ja'la was actually real, even if her relationship with Jailyn didn't work out, maybe Catfish will throw fans for another loop when the team takes on this mysterious couple. Like Nev and Max, anyone who's curious about the real Chanelle will have an uphill battle ahead of them. In his note to Nev, Michael writes that he isn't able to contact Chanelle through any social media except for Instagram, and when she stopped responding to his texts, calls, and DMs, he quickly became nervous enough to reach out to the show. And while Michael may not have had the online savvy to find Chanelle, maybe there are more clues for faithful Catfish fans.

A lot of the time, the possible Catfish-er is still on good terms with their significant other, but as the preview above shows, Chanelle is radio silent. When Nev and Max look up Chanelle's name, no news about a missing person with that name came up, meaning that Chanelle is either avoiding Michael on purpose or has a different name.

Chanelle Is Still In College

The story Chanelle told Michael was that she was once a Temple University student who relocated temporarily to North Carolina. A student-aged profile might suggest that the person behind Chanelle is on the younger side, and possibly a Catfish.

There's A Lot Of "Chanelles" On Social Media

While searching on Twitter, I noticed that even though the name "Chanelle" may not seem extremely common, there are a lot of people who use the name in their social media profiles. That might make it difficult for Nev and Max to find the real one.

Michael's Family Thinks He Should Let It Go

Michael's brother is arguing that he should move on from this relationship — looks like the voices of reason are skeptical about Chanelle.

Catfish Is Promising A Shocking Result

I think the official Catfish Twitter account would be promising shocking answers regardless of the ending of the episode, but I think it's going to be a doozy. There's only one way to find out whether Michael and Chanelle will wind up together, though — watch Catfish on March 30. This could continue Season 5's trend of having shocking conclusions.