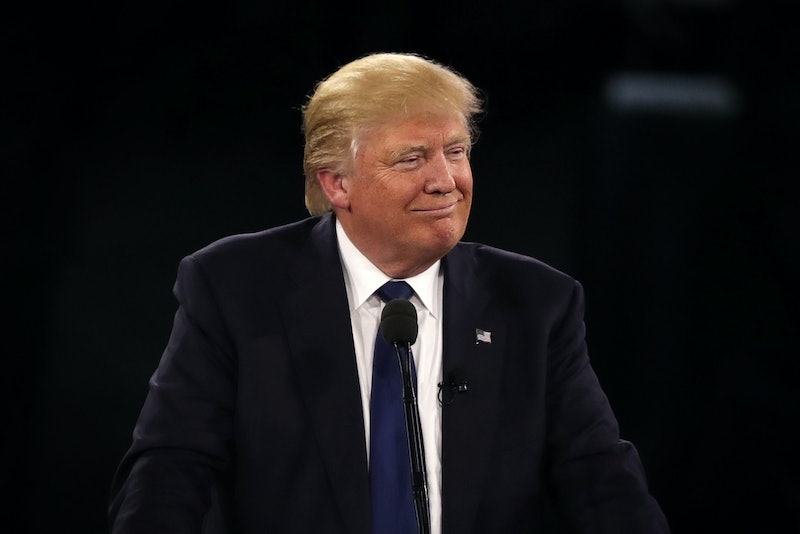 It didn't take long for Donald Trump to defend Corey Lewandowski in his typical way of ignoring the bounds of law and reality. On Tuesday, barely hours after Lewandowski, Trump's campaign manager, was charged with simple battery for allegedly assaulting a Breitbart News reporter, Trump was tweeting about his innocence. "Wow, Corey Lewandowski, my campaign manager and a very decent man, was just charged with assaulting a reporter. Look at tapes-nothing there!" the unwaveringly bombastic Republican presidential frontrunner tweeted.

Trump proceeded to insinuate that the reporter in question, Michelle Fields, had made unsupported claims against Lewandowski and had changed her story, tweeting, " Why aren't people looking at this reporters earliest statement as to what happened, that is before she found out the episode was on tape?" Lewandowski's arrest stems from a March 8 incident in Jupiter, Florida, when Lewandowski allegedly grabbed Fields. She subsequently shared a photo on Twitter of bruises on her arm. Security video from the event in question appears to show Lewandowski "grabbing her and pulling her away from the candidate," according to a New York Times report.

Trump spokeswoman Hope Hicks "insisted that Mr. Lewandowski was 'not arrested'" on Tuesday, according to The Times. Hicks did admit that Lewandowski “was issued a notice to appear and was given a court date.” In her full statement, Hicks doubled down on Trump's claim that Lewandowski had done nothing illegal: "Mr. Lewandowski is absolutely innocent of this charge. He will enter a plea of not guilty and looks forward to his day in court. He is completely confident that he will be exonerated.”

Lewandowski has a reputation for taking a physically aggressive approach to crowds at Trump events. Video of a Trump rally in Arizona early this month appeared to show him grabbing a protester by the collar.