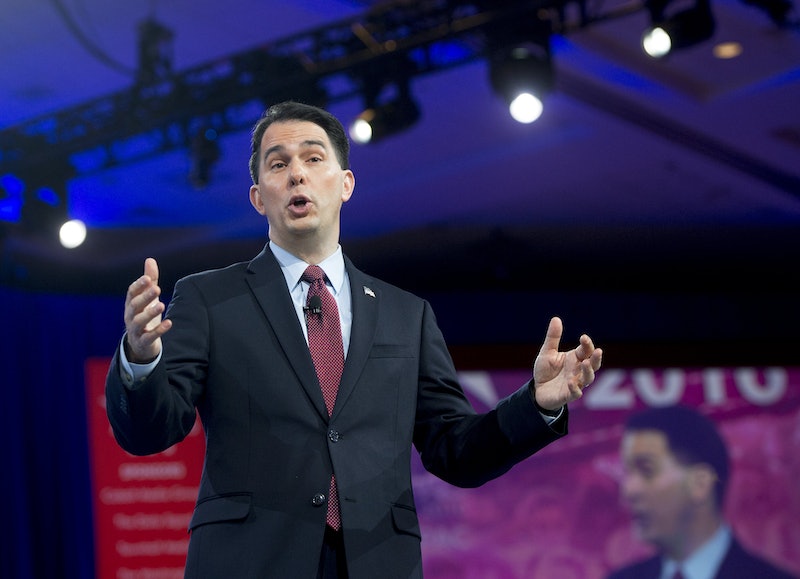 Gov. Scott Walker of Wisconsin and Sen. Ted Cruz of Texas are new BFFs since Walker endorsed Cruz for president on Tuesday. Calling Cruz "a principled constitutional conservative who can win," Walker's endorsement seems to help set Cruz on the path to victory in Wisconsin's primary next week — but the keyword there is "seems." Looking at the political small print that comes with Walker's endorsement, it becomes clear that it lends as much weight to Cruz's campaign as carrying water to sea. It certainly won't hurt Cruz, but it also won't help him much.

The obvious influence Walker may have on Cruz's campaign is in helping the senator win the Wisconsin primary. According to the latest Real Clear Politics polling, Trump and Cruz are effectively tied in the Badger State. Cruz is polling at 33 percent, while Trump has 32.3 percent. However, Cruz's barely-there lead is actually at risk when Walker's lackluster approval rating comes into play. Walker only has the support of 38 percent of his constituency. The majority of Wisconsin voters (57 percent) disapprove of how Walker's doing as governor, and nearly two-thirds of them (61 percent) would prefer that he not run for a third term. So considering how the majority of Wisconsin doesn't even like him, how would Walker convince the state to like his new buddy Cruz?

Well, here's the crux of it: Walker probably won't have much sway on voters, but he doesn't have to. The arguably more influential (or more popular) conservatives in the Badger State already hate Trump and, ergo, support Cruz, halfheartedly as a default though it may be. Popular conservative radio hosts take shots at Trump on the regular, with Milwaukee's WISN's Jay Weber having said, "What's the deal with the orange or red face paint?" and Milwaukee's WTMJ's Charlie Sykes saying, "The GOP’s current dumpster fire was set and largely fueled by some national talk show hosts who have decided that their infatuation with Donald Trump overrode their commitment to conservative principles." Yes, they're vicious.

And no Wisconsin legislators have endorsed Trump while several — before Walker — have endorsed Cruz. Even though they seem neck-in-neck in the moment, I think that when Wisconsin voters actually go to the polls, it will be a win for Cruz — one that would've come regardless of what Walker said. Since many influential Wisconsinites are #NeverTrump, that translates into #LikelyCruz.

Even if Walker was actually popular in his home state, it's not clear whether he would have much of a positive impact on Cruz. He just doesn't offer a lot to Cruz's already-full table of GOP establishment endorsements. Cruz has been backed by big GOP names, like former 2016 rivals Jeb Bush and Rick Perry. Cruz earned the vote of Mitt Romney, so he's already known as the Republicans' new establishment darling (sorry, Marco Rubio). Walker isn't enough of a heavyweight to change public opinion of Cruz in ways Bush & Co. can't.

It also doesn't exactly help Cruz that Walker has made it clear that his endorsement hinges a lot on Cruz not being Trump, and not Cruz being himself — even if he's claimed otherwise. Until his official endorsement on Tuesday, Walker spent quite a bit of time making it seem like Cruz's best selling point was that he was the Trump alternative. "If you’re someone who’s uneasy with the frontrunner, right now there’s only one candidate — I think if you’re just looking at the numbers objectively — Ted Cruz," Walker told Sykes in an interview from last Wednesday. “Sen. Cruz is the only one who’s got a chance, other than Donald Trump, to win the nomination." When Walker suspended his own presidential campaign in September, he also called on the GOP to rally behind "a positive, conservative alternative to the current frontrunner."

Left behind in this hoopla is John Kasich, whose results in Wisconsin's primary may actually be hurt by Walker's endorsement of Cruz, if only because it reinforces Cruz as a major player and draws public eye away from him. But the public has been aiming a wide eye at Cruz since long before Walker threw his weight behind him — and the public will still be focused on Cruz when Walker's endorsement fades into the background.