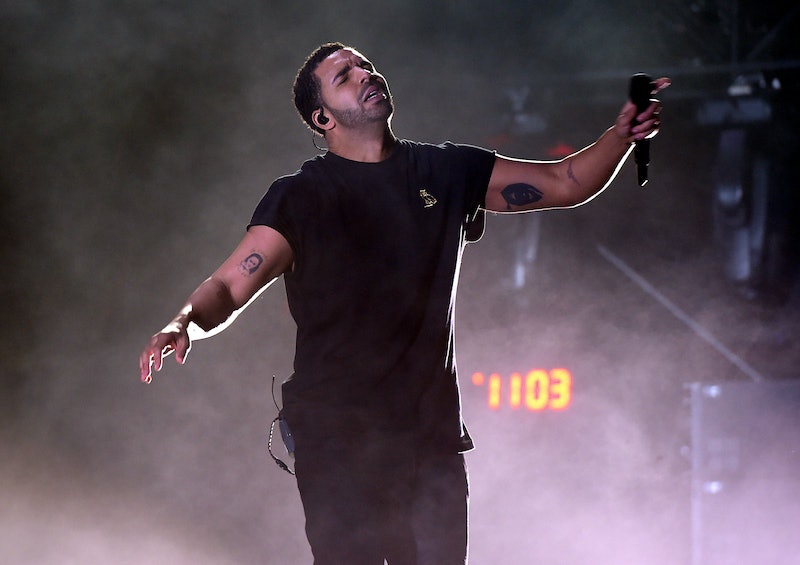 If you're in a public place, find somewhere to privately cry, because everyone's favorite sad boy, Drake, is featured on a new cover that will gut you. The song, a cover of Nico's "These Days" done by Babeo Baggins and featuring Drizzy, is one of two Drake tracks that leaked Monday night; the other is "Controlla," a tropical dancehall track featuring Jamaican artist Popcaan. But it's "These Days" that'll cause serious emotion. The track comes from Baggins' covers EP Love Songs For Tough Guys, and trust me, it hurts. You'll cry to the song, wipe your eyes, and then want to listen to all of Baggins' other songs ASAP. As much as I love Drake's vocals, it's she who's the real star here.

Although for awhile, many thought it was just Drake's song entirely. On Tuesday morning, "These Days" made the rounds as a track attributed to Drake from some unknown project, as it only featured his vocals. Quickly, it drummed up a buzz that the track was from Views From The 6, but it's actually Baggins' cover predominantly. The singer, who's from the rap crew Barf Troop, cleared things up in an email to Dazed :

Drake is a friend of mine. 'These Days’ is my favorite song in the world and I showed him the song because he had never heard it. He connected with it, which explains us doing the cover.

That's right, Aubrey Drake Graham had never even heard the haunting "These Days" from Nico's gorgeous 1967 album Chelsea Girls. So even though the leak was exciting for Drake fans (myself included), it's important to know that he wasn't the only person responsible for its making.

With everyone on high alert for when Drake finally drops Views From The 6 next month, basically any track that he breathes on is a big deal, but it's unfair to assume he's solely responsible for them. I love Drake, but this isn't his song, though his crooning is as beautiful and melancholy as usual. Thankfully, Baggins turned lemons into lemonade, releasing the finished version, "Things I Forgot To Do (These Days)," featuring both of their vocals after the leak. And clearly, it was a good move, because the track already has tens of thousands of plays on SoundCloud.

So now is a good chance to get to know Baggins, a 22-year old artist from Virginia who founded the subversive, powerful rap collective Barf Troop on Tumblr, which became the band's platform. Baggins identifies as a gender-fluid, non-binary person, and Barf Troop is all about transgression, questioning and reinventing rap, with lyrics that range from discussing aliens to gender identity. The four members of Barf Troop live across three different states, using Tumblr, Skype and text to put together their tracks, according to The Washington Post.

As for how Baggins got to know Drake, she said in the Post profile of Baggins above that Drake spotted her in the crowd at a concert last year because of her electric blue hair, and they became fast friends. Sadly, Baggins added that quickly, trolls began spouting vitriol because of Barf Troop's refusal to play into tropes: "We get ridiculed because we’re not typical rappers. As someone who’s viewed as female, you’re expected to meet a super-high standard to be taken seriously. We’re not like that. We’re just ourselves. And every male rapper gets to be that. Why can’t we?"

Hopefully, the new song will increase her profile and earn her more respect. You can listen to most of Love Songs For Tough Guys now ("Things I Forgot To Do" was taken off, but should hopefully return soon), which also features two beautiful covers of Lykke Li and Patsy Cline. Keep an eye on Baggins, because with friends like Drake, there's no telling how big Barf Troop could be.