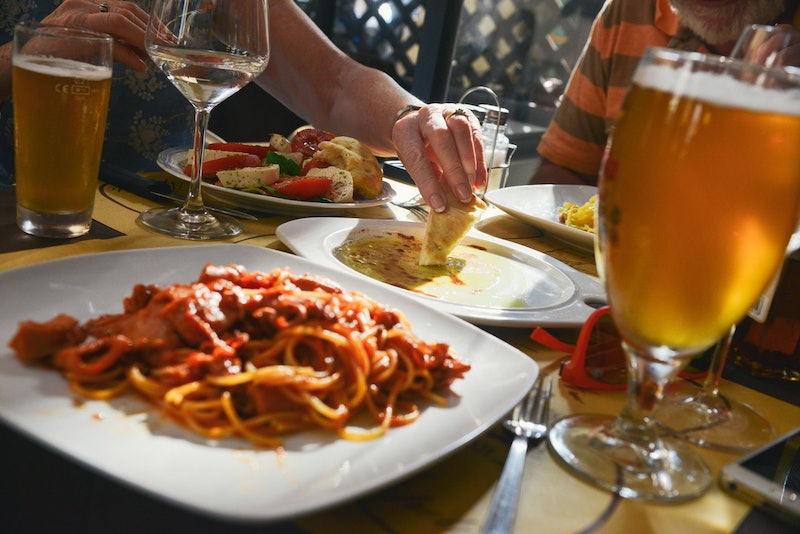 You’ve never seen someone eat as quickly as my brother. I dread having to eat with him, as I know he’ll eat everything on his plate in .5 seconds, only to then move onto mine. There is such a thing as ingesting too quickly, as apparent by certain signs you’re eating too fast. As we’ll talk about in this article, neglecting to take your time eating a meal can ultimately be quite painful and uncomfortable for your body.

When I am around my brother I, of course, have to force myself to eat quickly. I mean if I don’t I honestly won’t have the opportunity to get in a single bite before he’s taken over my meal. However, otherwise, I like to take it slow when I’m eating, if only because I’m a foodie and want to really enjoy every single bite. If you think you are always a fast eater, though — you’re not alone. According to WebMD, most Americans eat too fast.

A neat thing to keep it mind when you’re eating dinner tonight is that it takes about 20 minutes from the moment you start eating for your brain to signal fullness to the rest of the body, according to WebMD. Therefore, if you’re eating slower, you can really get a sense of how full or hungry you genuinely are, the outlet added.

For anyone who isn’t quite sure, here are six signs you’re eating too fast.

Call me old-fashioned, but I don't feel that comfortable letting a burp sneak out in most social situations. If you’ve just finished eating and can’t seem to stop the burps from coming up, it could mean you’ve eaten too quickly. According to Mayo Clinic, burping or belching is the body’s way of getting rid of extra air in your stomach. How did that extra air get in there? You guessed it — it could have to do with how quickly you’re eating. Easily help concur it by eating and drinking more slowly, the outlet suggested, so that you’re swallowing less air.

2. You Feel Uncomfortably Full After Every Meal

That feeling of being uncomfortably full is another side effect of that excess air build up in your stomach, according to LIVESTRONG. That air — in addition to causing those horrible burps — can make your stomach feel larger than it really is, and can be downright annoying. Aside from the air, if you’re eating fast you’re naturally not chewing food as thoroughly as you otherwise would, and this means larger pieces of food are headed to your stomach. LIVESTRONG noted this might give you that uncomfortable feeling, too.

According to The Daily Mail, researchers at the Medical University of South Carolina found that eating your food quickly can increase your risk of acid reflux. Specifically, the study showed eating a 690-calorie meal in five minutes versus 30 minutes caused up to 50-percent more acid reflux episodes. They cited the reasoning as that the digestive tract is filled with larger pieces of food and is therefore overloaded, leading to stomach acid. Acid reflux is associated with heartburn, as we’ll get into more, but when acid reflux becomes especially severe, it can lead to gastroesophageal reflux disease. This could lead to complications, including cancer, according to WebMD.

That air buildup that we’ve discussed? Well, it’ll also likely be causing your belly to balloon, according to WebMD. Keep in mind that another reason for bloat could be overeating, too, which goes hand-in-hand with eating too quickly, as we’ll get to in more detail.

If you’ve had heartburn before you know how awful is can feel. Heartburn is characterized by a burning feeling in your chest just behind your breastbone, and/or the sensation of pressure behind your breastbone, according to Heartburn.com. The outlet noted heartburn is caused when the lower esophageal sphincter, which acts like a valve in the esophagus, opens too often or doesn’t close tightly enough when we’re swallowing. This causes the stomach acid to head back up the esophagus. Heartburn.com cited eating too fast as a habit that can trigger heartburn symptom, so knock it off.

If you’re someone who is experiences some of these signs of eating too fast, slow it down, girl. Try not to eat in places where you’ll become distracted, and rather — when possible — be mindful of what and how quickly you’re eating, and take time to instead fully enjoy the taste of your meals.

More like this
3 Zodiac Signs Least Affected By The May 2022 Full “Flower” Moon
By Brittany Beringer
3 Zodiac Signs Most Affected By The Full “Flower” Moon
By Brittany Beringer
Meet The Spice Company Founder Who Sees Chai As A Metaphor
By Madhuri Sathish-Van Atta
If Your Refrigerator Is A Mess, These 25 Organizing Products Can Help
By Courtney Young
Get Even More From Bustle — Sign Up For The Newsletter