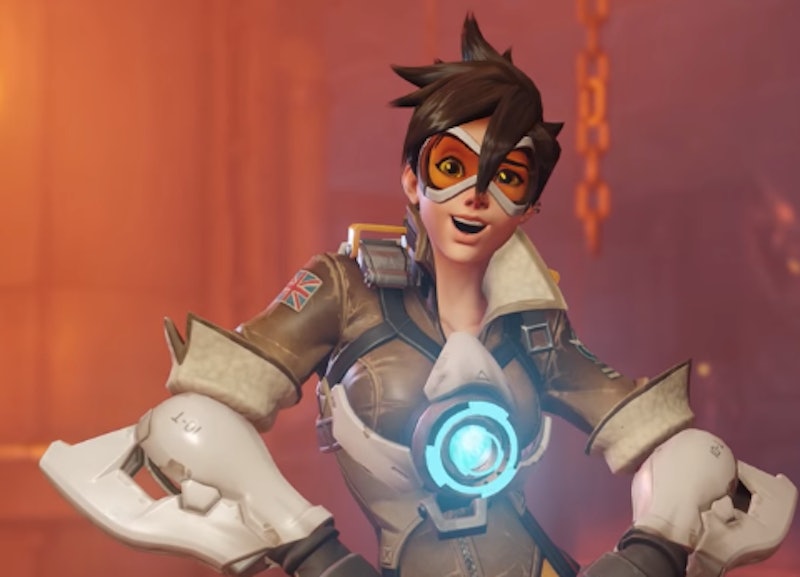 If you're a fan of video games, but not a fan of the pervasive over-sexualization of female characters in video games, then you might find this news notable. The upcoming game Overwatch is dropping a sexually objectifying victory pose after a player complaint during the beta.

Overwatch is a new first-person shooter from Blizzard, the company behind mega-hit competitive and cooperative strategy games such as the StarCraft and Diablo series and World of Warcraft. Overwatch won't be released until May 24, but when Blizzard opened up the game for a beta ― allowing players to get a taste of it, providing both widespread testing for glitches and bugs, and feedback from the public ― one particular non-playable aspect drew some controversy.

Basically, every character in Overwatch has different victory pose animations that a player can unlock and choose from. And for the time-traveling character Tracer (one of several female characters in the game), one of those victory poses gives players a quite conspicuous view of her backside, clad in skin-tight leggings. It stands out, given that Tracer is otherwise arguably one of the less suggestively-dressed of the female heroes.

In the interests of full disclosure, I haven't played the Overwatch beta (although I might well play the game after its release), so I haven't witnessed the pose in its intended context ― after a victory, naturally. However, the complaint (which was made in the beta's forums) was focused on the pose itself, and if you're not into wanton sexual objectification, or if you're simply tired of the strident anti-PC crowd feeling entitled to be the loudest voices while trying to silence the opinions of others, then you might take some pleasure in the result. Here's how Jeff Kaplan, Overwatch's creative director, responded to the criticism:

We'll replace the pose. We want *everyone* to feel strong and heroic in our community. The last thing we want to do is make someone feel uncomfortable, under-appreciated or misrepresented. Apologies and we'll continue to try to do better.

Needless to say, this has been met with some outrage within Overwatch's player base, as the backlash against progressive decisions in game design ― especially in relation to sexualization ― has been a industry-defining phenomenon over the last few years. For what it's worth, contrary to some of the accusations that get hurled around, proponents of inclusiveness of feminism in gaming aren't necessarily anti-sex in games, and not all feminists feel that expressions of sexuality in games can't be worthwhile or enjoyable. Different people have different views. Like so many things, feminism isn't a monolith.

But in a game that already boasted some of that in the form of other female characters, like the sniper character Widowmaker (and the men never seem quite so oozing with sensuality, do they?), the extraneous Tracer butt crack struck at least one player poorly. So they voiced their opinion, and the game designers agreed. That's the very process of feedback and subsequent tweaking that releasing a beta is partly about, and it's certainly no more silly or deserving of criticism to ask for that change than it is to howl with wounded outrage when the developer agrees.

More like this
Here's Your Daily Horoscope For May 19, 2022
By Mecca Woods
8 Types Of Avatars You Can Customize In The Metaverse
By Ginny Hogan
Amy Schumer Is Actually The Other Kardashian Sister You Never Knew About
By Jake Viswanath
Marissa Has No Regrets About Her 'Temptation Island' Romance With Edgar
By Brad Witter and Kadin Burnett
Get Even More From Bustle — Sign Up For The Newsletter