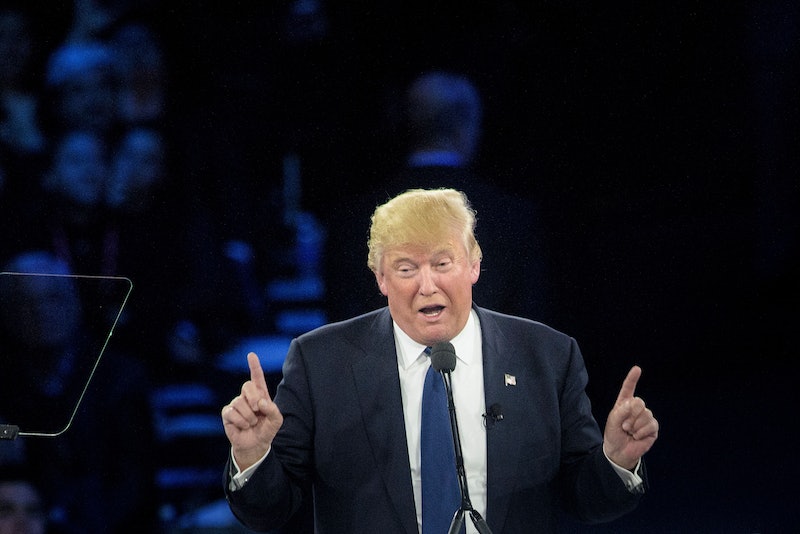 In an interview earlier this month with Fox News' Megyn Kelly, Michelle Fields recounted an alleged violent experience she had at a March 8 campaign event for Donald Trump. Trump's campaign manager, Corey Lewandowski, allegedly grabbed Fields' arm — hard enough to bruise her — before shoving her away from Trump as she was trying to ask him a question. Although Fields has since filed charges and Lewindowsky has been issued a court date from the state of Florida for charges of simple battery, this is not where the story ends.

Fields also told Kelly that since she began speaking out about her experience, she has received a great deal of hate and harassment from Trump's camp and his supporters. The vitriol has been so bad that "This has to be, aside from my father's death, the worst experience that I've gone through." Fields cited the "hate that I’ve received, the email messages," but anyone curious about it only has to take a brief look at her Twitter mentions to see the volume of hate she's faced.

While misogyny in Trump-related incidents certainly plays its part, Fields' story is indicative of a larger problem of harassment that female journalists (and women who write or speak out on the Internet in general) face. And that's a problem that absolutely transcends political parties and affiliations.

A report from the International Women's Media Foundation (IWMF) shows that stories like Fields' aren't outliers. The IWMF's "global survey on harassment and violence against female media workers," which gathered anecdotes from female journalists from around the world from August 2013 to January 2014, found:

Nearly two-thirds of survey respondents said they had experienced some form of intimidation, threats or abuse in relation to their work, ranging in severity from name-calling to death threats.

According to the report's executive summary, that statistic includes both physical incidents on the job and online threats and abuse that occur once a story goes to print. The summary adds that nearly half the respondents said that they experienced "psychological trauma" as a result of these incidents.

The study also noted that reporting incidents of "intimidation, threats and abuse" often led to greater problems for journalists in the long run. One respondent wrote that she felt she'd be committing "career suicide" by reporting an incident that occurred with a "well-known figure" in her industry. "When respondents did report acts of 'intimidation, threats and abuse,' results ranged from nothing changing to being forced out of a job," the study says. "Some said they regretted reporting abuse, as negative responses from supervisors, colleagues and authorities made the situation worse."

Fields can be seen as a prime example of the pitfalls facing a female reporter who goes public with harassment and/or abuse. Fields ultimately resigned from her position at Breitbart News, saying that she did not believe the conservative outlet had "adequately stood by [her]" following the incident, as it published a story that questioned her claims. To show their support of Fields (and anger with Breitbart), some of Fields' colleagues also resigned. BuzzFeed News also reported that editors at Breitbart ordered staffers to stop tweeting support for Fields via an internal Slack chat. According to the BuzzFeed report, Breitbart did not publicly comment on the situation.

While it's obvious that harassment of anyone (online or in the field) for simply doing their job is unacceptable, the kinds of threats women receive online are a different breed of nastiness. In addition to the ideological and rhetorical attacks and everyday dickish behavior pretty much all writers face online, the hate female writers receive is often gendered, sexual and violent in nature. It's clear from posts shared by Fields that she has received a number of those herself.

Dunja Mijatović, the media freedom representative for the Vienna-based Organization for Security and Co-operation in Europe (OSCE), wrote in a column for Index on Censorship that women experience "what Irina Bokova, director-general of UNESCO, has described as a 'double attack': they are being targeted for being both a journalist and a woman."

Mijatović proceeded to explain how these kinds of attacks and threats are harmful not only to the women themselves, but also to free speech and media: "These kinds of attacks cause severe physiological trauma for journalists and their families," Mijatović wrote. "By constantly being singled out and targeted with abusive comments, many female journalists may re-evaluate the issues they choose to cover. In this way, such attacks pose a clear and present threat to free media and the society as a whole."

The solution? According to Mijatović, the first step is taking the experiences of these female journalists seriously and recognizing online threats as threats against free speech:

We have to acknowledge that online threats are as real and unacceptable as threats posed in the offline world ... The responsibility to counter online abuse of female journalists does not solely rest with law enforcement agencies, however. The broader media community itself also plays an important role. One of the challenges facing media outlets is how to improve quality of content moderation without invoking censorship.

Maybe Fields' experience will be the wake-up call the public needs. But based on the reaction to the presidential race thus far, I'm not holding my breath.