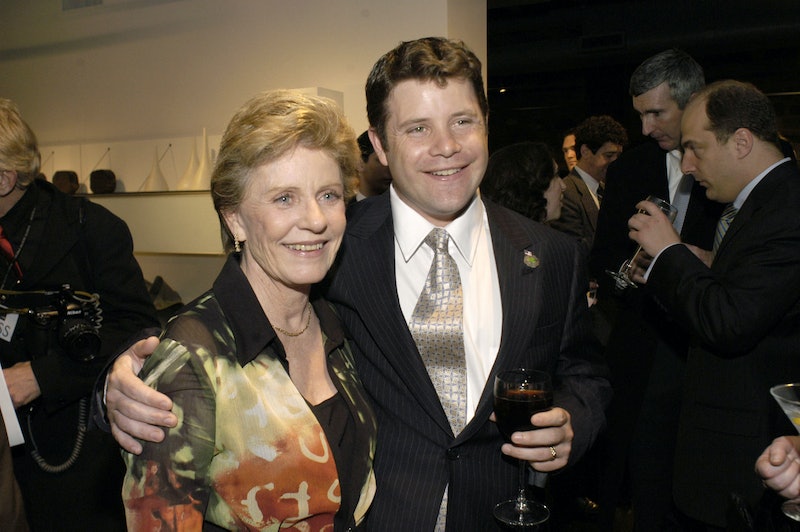 The entertainment world was rocked on Tuesday when it was confirmed by her family that Patty Duke had died at the age of 69. The death seemed to come as a surprise to many of her fans, and her rep Mitchell Stubbs confirmed that the cause of her death was due to complications from sepsis from a ruptured intestine. In the immediate aftermath of her death, her family issued a beautiful statement to Bustle which celebrated her inspiring and positive spirit saying, "We celebrate the infinite love and compassion she shared through her work and throughout her life." Her son, actor Sean Astin, joined in the public mourning of Duke and shared that he would launch The Patty Duke Mental Health Initiative, to keep her legacy alive.

Astin posted a beautiful photo of him and his mother on his Facebook, with a link to a crowd funding website, Crowdrise, for the new foundation. Aside from her incredibly prolific career in film, television and the stage, Duke was revered for her extensive work to increase awareness of mental illness after she was diagnosed with bipolar disorder in 1982. Astin chose an inspiring way to celebrate his mother, and he shared that this foundation would be the culmination of her life's work.

He wrote a lengthy post on the page of the Crowdrise fundraiser for the Patty Duke Mental Health Initiative:

The nature of this kind of illuminating and compassionate work become the sacred mission of her life. She became a voice for the voiceless, a reassuring presence for the scared, the intimidated and the lost. She was a healer of many souls and a champion for so many in need...Her greatest achievement was confronting her mental illness and making her story public...My mom took her place as a mental health advocate in the greatest tradition of noble leadership.

Although the illness she was suffering from wasn't public knowledge, Astin shared that he had worked with his mother to ensure that her work would continue after her death. He wrote of the exact mission of this new initiative:

Before her passing, before the suffering became too great, we talked about how the core mission of her mental health work might continue beyond her life. This initiative will fuel a multi-level approach to achieving results for those suffering with mental illness and their families and communities. Public awareness campaigns, lobbying efforts, and supporting a multitude of mental health programs big and small will be organized, prioritized and vigorously pursued.

This fundraiser says multitudes about the close relationship between Astin and his mother, and about the true character of Patty Duke. Patty Duke was a woman who brought light and life to those around her, and with her son's help, this will continue for many years to come.

More like this
9 Films About Mental Health To Watch On Netflix UK
By L'Oréal Blackett and Sophie McEvoy
I Was All For Medicating Mental Health Issues – Just Not For Me
By Anonymous, by Dana Smith
Doja Cat Needed Tonsil Surgery & Now She Can't Eat Taco Bell's Mexican Pizza
By Jake Viswanath
Britney Spears & Sam Asghari Announced Their “Devastating” Pregnancy Loss
By Stephanie Topacio Long
Get Even More From Bustle — Sign Up For The Newsletter