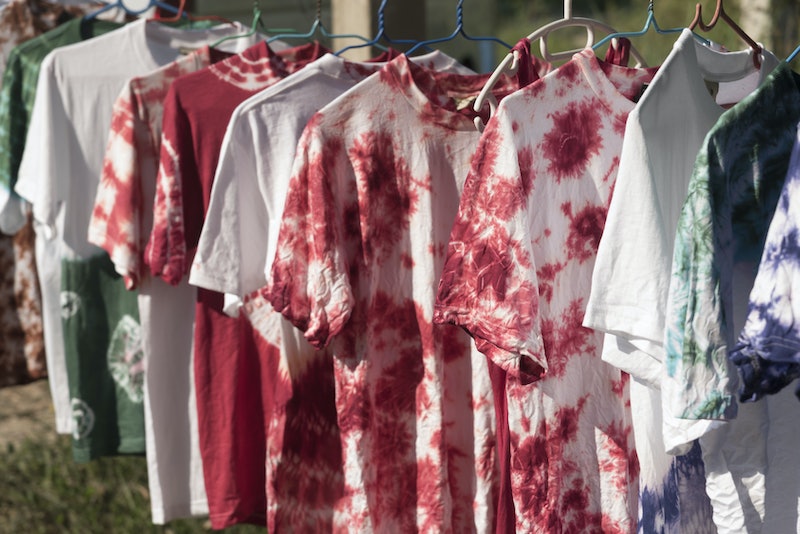 As the child of two parents who worked full-time, summer was inevitably spent at camp. I wiled away June, July, and August onstage, singing and dancing in oversized camp T-shirts and loving honestly every single mosquito-bitten minute of it. Camp was different than school or extracurricular activities. Camp was like an alternate universe, and there were definite signs you were a summer camp kid. Camp kids, those of us who returned year after year, who knew each other and every counselor by name, formed an enthusiastic, sunburned, tie-dyed, chlorinated community.

From the ages of 8 to 13, I went to a Jewish day camp for theater kids, which I know sounds super specific and you're like, "That's not real camp, you nerd." But here's the thing: Despite the specificity of my camp, and despite there being a lot of details that other kids would not necessarily relate to — the nervewracking first day auditions, the noticeable divide between techies and performers, flirting with your crush backstage, dipping your challah in your grape juice like a cool dude in the know after Friday Shabbat service — there are plenty of universally-recognized signs of a summer camp attendee. So yeah, maybe I know a few more showtunes than you, and yes, maybe I can still sing a Yiddish-filled parody of Queen's "Bohemian Rhapsody." So what? We still both went to summer camp, and we can still both relate to pretty much all of these classic camp kid signs. Get ready to feel the ache of nostalgia.

1. You Had A Whole Different Identity With Your "Camp Friends"

2. You Lived For Color Wars

Yes, that is me on the right, and yes, we did use the Pink Panther theme song as part of our cheer. Color Wars were essentially when the camp was split up into, um, colors. Like a bunch of colors. And then you had to make a banner and a cheer and a dance and compete in a bunch of camp events, like a blind obstacle course and a water balloon toss. It was the highlight of the summer, and yes, I looked amazing, thank you so much.

3. You Got The Weirdest Sunburns

Scalp? Check. Tops of my feet? Check. My whole face except for the parts covered in paint? You bet. Honestly, 90 percent of my skin damage happened at camp. It just seemed... sunnier then? Like sunny and hot all the time forever? You know what I mean.

Tie-dyed items that you made yourself. You carried each of them home in a giant Ziploc bag, and your mom was like, "Don't bring that in the car, you're going to stain everything we own." You, meanwhile, were like, "There are memories in this bag, Mom." Bonus points if you further DIY-ed your shirt by cropping it, or ripping the sleeves off, or cutting fringe along the bottom.

5. You Were A Master Of Outsmarting The Counselors During Overnights

Sneaking snacks in your pillow case and pop cans in your sleeping bag. Huddling your blankets in a weird mound so that the counselors couldn't see your book light. Stifling giggles for seven hours, because ha ha, you were not going to sleep, no way. By the time I got to college, I was a pro at all-nighters. Please. Easy-peasy. As a counselor, however, I didn't sleep... and then had to run improv exercises the next day and wrangle sobbing, hormonal 12-year-olds. The times, they do change.

6. Acoustic Guitar Covers Are Forever Lodged In Your Brain

I still know all of the Indigo Girls' major hits, as well as a little Joni Mitchell and that song about "Little Boy Blue and the man on the moon." Oh, and the other one about how, "We're captive on a carousel of time — TICK TOCK."

7. Your Favorite Kind Of Jewelry Was Yarn-Based

You know the end-of-summer thing where you sit in a circle with a giant ball of string, and then each person has to compliment someone and roll that person the ball of string, and then that person wraps the string around their wrist or their ankle and you keep going until it's a giant ball of emotions and giddiness? And then you cut the string so that everyone is left with a little bit and they pledge to wear it forever or until it falls off? Yeah. That.

Very few children relish the idea of having to go back to school, but camp ending, especially in a time before social media and rampant tween cellphone use, was literally the saddest thing to ever happen. What if your BFF didn't come back next summer? What if your crush moved away, or worse — returned with a SIGNIFICANT OTHER?

Thanks for the memories, camp. Never forget.

More like this
11 Trends From The ‘90s That Made You Feel So Cool
By Julie Sprankles
Remember These Ancient Pieces Of '90s Tech?
By Lucia Peters and Emma Carey
8 Creepy Things You Probably Did In The '90s
By Julie Sprankles
4 Most Outspoken Zodiac Signs
By Kristine Fellizar
Get Even More From Bustle — Sign Up For The Newsletter