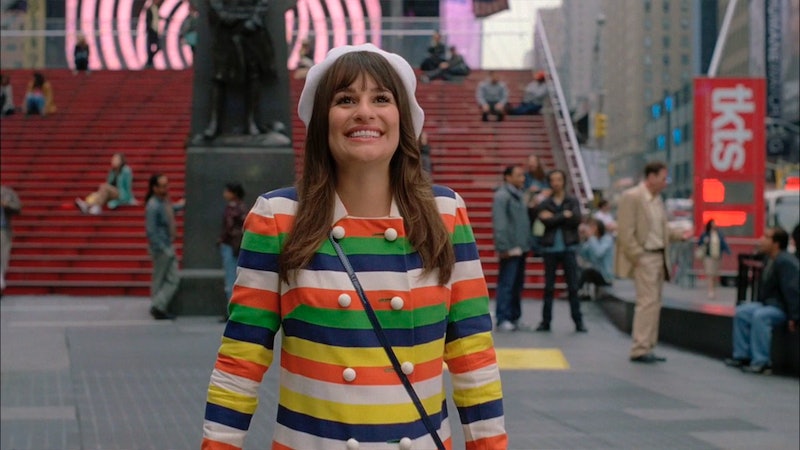 I never meant to be a theater kid. The first show I ever did I was forced onto me in kindergarten when my teacher pulled my name out of a hat and determined I would be one of six dancing poppies in The Wizard of Oz. I basically spent the whole time trying not to throw up. As awesome as theater kids are, I decided from a young age that I was way too shy and way too awkward to be one of them. That, of course, was before I realized that "shy and awkward" are basically the only theater kid prerequisites, and eventually succumbed to my destiny.

And although the high school and college days of tech weeks and showmances and sweat-dripping costumes are long over, there is a flame that never dies (I'm sorry, I had to, it'll stop being stuck in your head by next week). Being a Theater Kid might be temporary, but being a there are some parts of that identity that will, no matter what you do, last forever. There is simply no denying that growing up in the drama department changes someone...for goooood (sorry, again). Here are a few of the many ways that being a theater kid affects you in adulthood:

You're Friends With Literally Everybody

The theater was everyone's home—not just theater kids, but outcasts and misfits and stragglers from every clique in the school. I would argue that theater classes were among the most diverse populations in the school in terms of "social status." As an adult, you're not intimidated by anyone or dismissive of anyone, either. Less awkward sizing up of people and more FRIENDSHIP.

You Have No Filter

The other day I tweeted my concern that the hair on one of my armpits grew faster than the other. Not sorry.

In Fact, You Pretty Much Have No Shame

The concept of "shame" is something you have to get over pretty fast in the theater world. I'm pretty sure I was cast as "whore" in three productions before I turned 17. And yes, I was painfully awkward, and yes, the teacher at one point had to stand up and personally give me a lesson on shimmying my boobs because I couldn't move my shoulders independently of my head, but you know what? All of the mortification I got over in high school means that I'm pretty much never embarrassed by anything anymore.

When You Actually Do Wear Make Up, You Bring Your A-Game

I'm not that into wearing make-up because I'm lazy, but when I do, it's perfection. At any party, you can always tell who the ex-theater kids are because their faces are basically flawless. We had that weird cat eyeliner thing mastered basically as soon as we were out of diapers.

You Have Fabulous Endurance (Especially In Heels)

Honestly, I think the only reason I had the chops to become a runner is that we had so many crazy dance calls in school. And while it did nothing to improve my coordination, I now have the lung capacity of an elephant and ankles of steel.

You're Super Talented At Bullsh*t

Everyone gets frazzled now and then, but you can pick up the pieces way faster than your fellow non-theater friends. You spent years ready to ad lib at any moment. As an adult, you soon realize that the theater is way more unpredictable than the real world. If someone doesn't drop a line or a set piece doesn't fall and almost crush you in the middle of a scene (STILL NOT OVER IT), then the show already went better than expected.

I've been told "no" more times than I can count, even in the last few weeks. I've literally had directors line me up with other girls against a wall, look me up and down, and tell me to go home. There is no kind of rejection that phases me anymore, and it makes me a lot more gutsy about taking chances, especially the impossible seeming ones.

I would like to take this moment to apologize to anyone who has ever stopped next to me at a red light. I'm not insane (well...).

You Are Always Open-Minded And Accepting

The theater crowd is one of the most welcoming groups I've ever been a part of. No matter who you were, or how you identified or defined yourself, there was a place for you there.

You Bring The Party

Nobody lets loose like ex-theater kids do. 50% less shame = 600% more fun. This stays true no matter how old you get. In fact, it might become even more true as you get older.

You Aren't Afraid To Take Risks

Once you've graphically simulated sex on stage with your parents in the audience, suddenly skydiving doesn't seem like such a big deal. Seriously, though, gearing ourselves up for auditions all the time gives theater kids iron nerves. We are not easily intimidated.

Some Days You Still Find Mic Tape Residue On Your Body

It'll still be there when you die.

You're A Lot More In Tune With Your Emotions

Evaluating all of the motivations and emotions of the different parts you've played over the years means you recognize it a lot more easily in yourself. If I'm unhappy about something in my life, I never have to struggle to figure out what it is.

Theater is a world of opportunity, only for people who make opportunities for themselves. You have to bring 100% of yourself to every audition and rehearsal and you have to bounce back from being told "no" 11 times out of 12, and there is nobody you can depend on for that but yourself.

You Will Forever Nurse An Obsession With NPH

I'm still suspicious that he is a government experiment designed to test theater nerds' capacity for obsession and excitement, but this will probably not be confirmed or denied until long after it's too late to save us.

The Friends You Make Are Lifelong Ones

You're still friends with everyone from your theater kid group, no matter how much time has passed or how your priorities have changed. I notice that theater kids grow up to cultivate those kinds of friendships even outside of the theater world. We make friends often and intensely, and I'd like to think humanity is better off for it.

More like this
How To Make A Dirty Shirley Cocktail
By Emma Garza
Everything To Know About 'My Big Fat Greek Wedding 3'
By Grace Wehniainen
Alicia Silverstone Has Recreated An Iconic 'Clueless' Scene
By Frances Stewart
Emma Thompson, Lashana Lynch, & Stephen Graham Lead Netflix’s 'Matilda'
By Sophie McEvoy
Get Even More From Bustle — Sign Up For The Newsletter