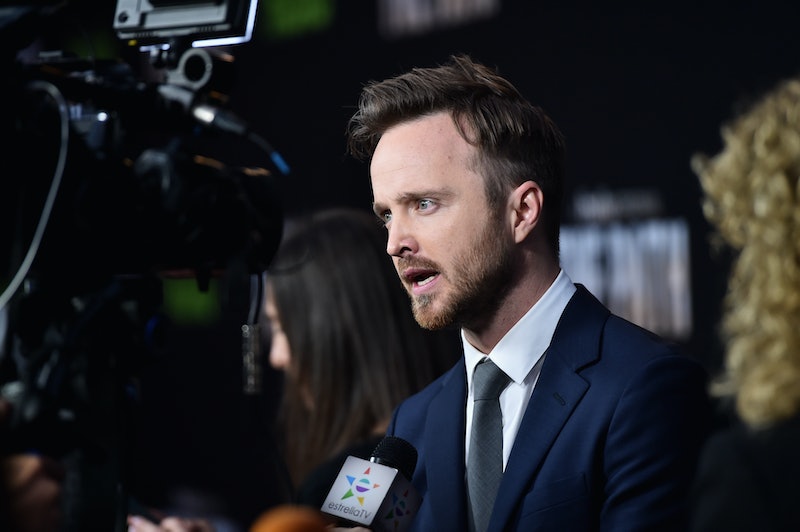 I love Jesse Pinkman from Breaking Bad. Sure, he's made some meth, killed some guys, and been addicted to all sorts of drugs, but that doesn't hinder my love for Walter White's less-evil sidekick. But who I really love is the actor who plays Jesse Pinkman, Aaron Paul. Paul did a great job with the role of Jesse, such a good job I often forget he was acting. My head knew I was watching a TV series with an actor named Aaron playing a role, but my heart was watching Jesse Pinkman loveably messing everything up again, as usual. Now Jesse...er...um I mean Aaron, is onto the next, specifically a new Hulu original series, and Aaron Paul's new role in The Path is a total 180 from his role in Breaking Bad.

Paul plays a loving father/husband-type who lives in New England with his family. Pretty normal right? Wrong. The character Paul plays, Eddie, and his family are a part of an apocalyptic cult known as the Meyerist Movement which is based on the teachings of a Dr. Meyer. The show explores the Movement and the challenges with full conversion that Eddie experiences. His wife, Sarah, (Michelle Monaghan) seems to have totally drunk the kool-aid being dished out the by the leader, Cal (Hugh Dancy) but Eddie is unconvinced. Eddie must figure out what is more important to him: following his own beliefs or being with his family.

Now, seeing Paul as someone who is tangled up in something he struggles with is nothing new. In Breaking Bad, the character of Jesse Pinkman also found himself conflicted about what he was doing and where his allegiances should lay. But this time around, Paul's character is not just looking out for himself, he's the patriarch of a family and must also be aware of their safety. In an interview with Vulture, Aaron Paul talks a little bit about his role in The Path and his very different persona stating,

I was really trying to find something that was the polar opposite of what people viewed me as. Most people that know my work know me just as that one character on Breaking Bad, so I wanted to try to do something a little different. But it was the story, this world that Jessica [Goldberg] created. When they sent me the first two episodes, and I read them, I just was so drawn into this world, into the Meyerist movement.

Paul seems excited about the series and that makes me even more excited for it's Hulu release. I can't wait to get lost in his character and forget that he's actually a dude named Aaron Paul and just think of him as Eddie. Eddie, the guy who's involved in an organization that may or may not be a cult but does seem to have some nice core values. In the same interview with Vulture , Paul mentions these values are, to "be a good person. Live a life of transparency. No secrets."