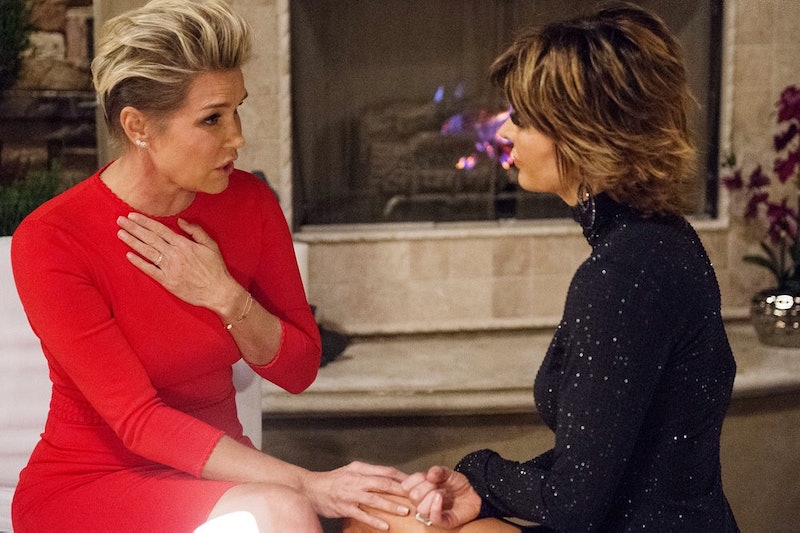 If you were hoping to hear something new and exciting from Lisa Rinna this week on Real Housewives Of Beverly Hills: Prepare to be sorely disappointed. She is still talking about Yolanda Hadid and whether or not Yolanda is truly suffering from a legitimate ailment. I can't be the only one who is tired of hearing these women debate the validity of Yolanda's illness, right? Especially since Yolanda is supposed to be considered one of their friends. Fortunately the RHOBH star doesn't let it get to her. In a Bravo blog written December 2015, Yolanda addressed Lisa's comments (yeah, this conversation has been going on since then) with a pretty positive outlook.

I don't blame Rinna, Kyle or LVDP — I understand it and feel sorry to see my battle be such a point of weakness for them. If I let fear of what others say about me creep into my mind, I probably would not be where I am today.

On Tuesday's episode, the ladies of Beverly Hills were across the globe in Dubai having a vacation straight out of Sex And The City and they still couldn't manage to get their drama in check. Don't get me wrong, I wouldn't want it any other way. These shenanigans give me life. The thing that I am definitely done with, though, is the Yolanda conversation. It's like Groundhog's Day at this point. Each week, we have to hear the same debate about Yolanda when she is not even around to defend her position. How many times can we talk about this woman's illness? Leave it be, ladies!