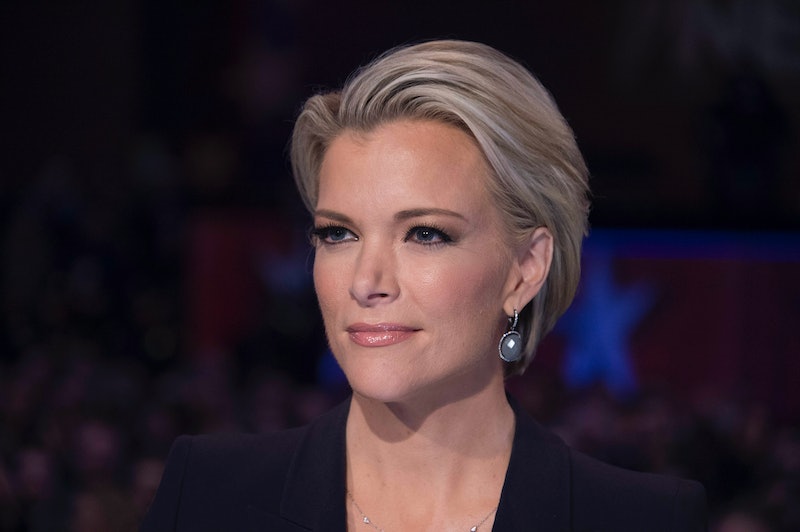 On Tuesday, Republican candidate for president Donald Trump's campaign manager, Corey Lewandowski, was charged with battery for allegedly grabbing and manhandling former Breitbart reporter Michelle Fields. It's just the latest chapter in a string of controversies regarding Trump and his campaign's treatment of women. The issue was first highlighted by Fox News' Megyn Kelly at the very first Republican debate back in August. Kelly called out Trump in a big way, setting off a feud that has particular relevance this week, even though neither of them were directly involved in the charges that were filed on Tuesday.

Lewandowski was charged as the result of an alleged run-in with Fields at the Trump National Golf Club in Jupiter, Florida on March 8. Fields tried to ask Trump a question following his primary wins in Hawaii, Michigan, and Mississippi, but she was quickly pulled away from the candidate. The encounter reportedly left bruises on her arm. Trump has defended his campaign manager and accused Fields of changing her story.

Since launching his presidential campaign, Trump has come under fire for his attitude toward women. Kelly, a moderator at the first Republican debate, made his reputation in regards to women very clear from the start. The very first question of the very first debate — which she wrote and researched herself — listed Trump's insults toward various women, including the time he told a Celebrity Apprentice contestant that it would be a pretty picture to see her on her knees, and asked him why he felt he was fit to be president.

"Does that sound to you like the temperament of a man we should elect as president?" Kelly asked. By calling Trump out at the first chance she got, she stood up for women, Republicans, and, in particular, women who are Republicans and don't want to be defined by Trump's definition of femininity.

Vanity Fair published an extensive interview with Kelly back in January, telling a story of the Fox News headliner that went beyond her highly-publicized feud with The Donald. Although she won't necessarily use the word herself, Kelly has become something of a feminist role model in recent years, rising to the top of the most prominent conservative news outlet in the country while challenging politicians, public figures, and relevant guests on their conservative points of view. As Vanity Fair's Evgenia Perez recounts, Kelly once challenged a Fox News contributor who saw the transgender Chaz Bono as a "danger" to America, saying, "There's so much hate for gays and lesbians and transgender people. You seem to be adding to the hate."

Trump's campaign has created a challenge for women — he continues to win primaries and caucuses without having to really answer for his past statements and attitudes toward them. In fact, the very way that Trump has treated Kelly seems to represent his desire to run away from women's issues. Frankly, Trump didn't have a good answer to her question back in August, and he chose not to show up for a debate that she moderated later on.

Fortunately, Kelly is not one to shy away from such tough conversations. As much as Trump has redefined what it means to be a Republican candidate for president, Kelly has given women an opportunity to redefine what it means to be a Republican woman. She challenges Republican stereotypes and beliefs in her prime-time show on the GOP's news network of choice, and she represents the epitome of the modern working woman. Rather than reading another story about the potential GOP nominee and his outrageous campaign, read about one woman who has decided to take him on.