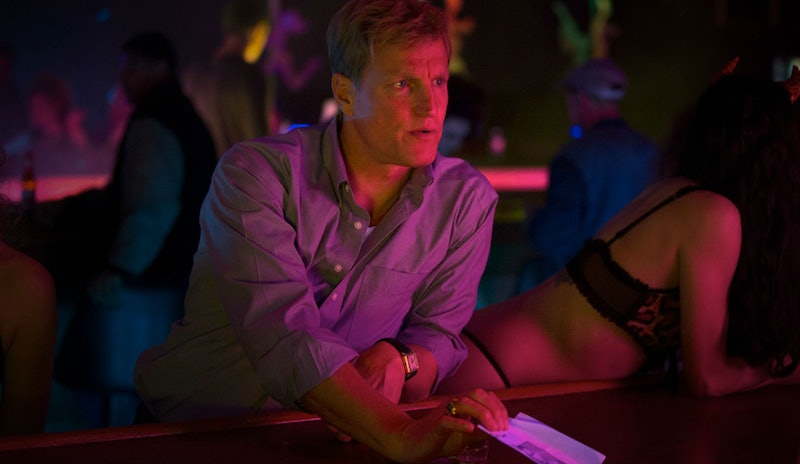 At its outset, True Detective was a refreshing change of pace in the tired cop show genre. Then, Matthew McConaughey's Rust Cohle's philosophical soliloquies dangled the series over a the precipice of unadulterated pretension. Now, in its fourth episode, True Detective tosses its gentler, more methodical ways to the wind and delivers a nasty divorce, an angry mistress, bikers, and a gang shootout. And we thought this show was supposed to be different.

Of course, in its form as an American Horror Story-style series that offers up a new set of characters and new mystery each season (if it gets further season orders, that is) it's still rather refreshing. We know that by the end of episode eight, the mystery will be over and no one's characters will be dragged into further seasons in which they're forced to go on shouting their own versions of police cliches. Still, something about this week's episode felt like it was ripping pages from Sons of Anarchy and Law & Order and gluing them together.

What's stranger still is that while the action ramped up, the mystery's pace hasn't changed as much as you'd expect. We're still learning the tiniest bits and pieces at a time — about every aspect of the characters' lives and the mystery at hand.

As is to be expected after Marty drunkenly sloshed around his mistress Lisa's apartment and smacked her date in the head a few times, Lisa is furious. When she confronts Marty at the courthouse, where she works, and asks him to apologize and to respect her, he ignores her, alleging that giving her the cold shoulder is his form of respect. I'd balk at his comments, but it's been made pretty clear that Marty isn't exactly the hero here even though he's after the bad guys.

Marty's mistake leads Lisa to tell his wife Maggie everything. Maggie flees with the kids, leaving Marty nothing more than a note detailing her decision. After he goes Incredible Hulk on the letter, he visits Maggie at the hospital, refuses to respect (there's that word again) her decision, and is subdued by security guards until Rust comes to pick him up.

Later, Rust grabs coffee with Maggie who's unflinching in her decision to make a clean break between Marty and herself, in addition to their daughters. Rust makes a semblance of a plea by suggesting that their kids are all that matters — he serves it up with his theory about how "man-woman drama" only exists to produce children. She scoffs and tells him he was probably a terrible husband and yet, when Rust tells Marty about the conversation, he gives his frazzled partner false hope.

LEDOUX IS THEIR MAN... PROBABLY

After learning Reggie Ledoux's identity last week (and giving us a terrifying shot at what could be Ledoux traipsing around in his yard) Rust and Marty are no closer to finding their suspect. They interview his cell mate — Dora's husband — who confirms they roomed together and that he showed Ledoux pictures of Dora and shared "pussy stories." It's almost certain that his interactions with Ledoux led to Dora's death and Rust is kind enough to ruin the poor soul's life by telling him that.

Because they can't find documentation on any of Ledoux's family, they track down his friend Tyrone Weems by visiting his mother and then his ex-girlfriend Kelsey, who's a stripper. In a single scene, the series furthers the plot and fills HBO's nudity quota — something we thought they might be shirking just this once until this week. With breasts bobbing everywhere, Marty gets information from the ex-girlfriend's boss, who says that Tyrone was a crystal meth dealer.

The trail goes dry until, in his sad stupor, Marty pulls a Rust and follows Kelsey to a rave where he finds Tyrone and threatens him for intel: Ledoux joined a group of "white men who worship the devil." He says that Ledoux has the spiral tattoo and that this group even sacrifices children. As for employment, Ledoux is said to be cooking meth exclusively for a biker gang called The Iron Crusaders — a name that strikes fear in Rust's heart when Marty delivers the new information.

And while all this is going on, 2012 Marty drops the heavily suggestive line that the whole time they were searching, the thing they were looking for was right under their nose. Perhaps that means they already know Ledoux, but it could mean (say it ain't so) there's another suspect.

After hearing Marty's news, Rust turns not only to alcohol, but to the hard stuff: whiskey he keeps in his gun locker. After he retrieves Marty from the hospital and calls him out on his bullshit excuses for cheating on his wife "with a young version of Maggie" (admirable until he asks Marty if he can identify "crazy pussy," referring to Lisa who was arguably made crazy by Marty's behavior), Rust gets into some of the truths we've been short on.

He spent four years under cover for the DEA with guys from the Iron Crusaders. They think he's dead, but he can whip up a story and reappear, but the department can't be involved. To cover, he asks for a leave of absence in the middle of the investigation — something the 2012 detectives find rather improbable — to "visit his father." The present day detectives find no record of Rust's father's Leukemia or Rust's father, but it's possible Rust wasn't lying about having a father in Alaska. He later describes his dad as a "survivalist" with strange habits and a deep respect for absolute loyalty.

But it's not just his father story that's shaky — it's his sobriety too. While he makes a point of giving himself fake track marks with ink and cayenne pepper to fool his biker buddies, he also actually tests the cocaine he steals from the evidence locker for his mission and appears to actually enjoy it. He almost seems to have missed it. Later, he's drinking beer like it's nothing and it only gets worse when he gets deep undercover.

THE SHIT HITS THE FAN

Once the plan is set, Rust and Marty visit the bikers' haunt. Rust enters with his biker identity — they call him Crash — and Marty stays outside, waiting for Rust to call him in as a getaway car. When Rust gets in, he's pulled into a deal going down that night — a measure of earning his old buddy Ginger's trust — and winds up going down to Ginger's bayou hovel where even more nose candy is consumed. Marty — clearly concerned for Rust's sobriety, even if he did technically try to use it to get into the bar -- sees him taken away on a boat and sits hopelessly in their getaway car until he's needed at the last second.

The gig Ginger brings "Crash" along for seems to be as much a racial battle as it is territorial. The bikers go after a group of black dealers, but as we're made aware, the cops are already patrolling this neighborhood by helicopter. When they get into the house, Rust encounters a kid and saves him by making him lie down in the bathtub. It's just in time because his cohorts begin shooting the gangsters, drawing the police down on them. Rust manages to extract himself and Ginger — his key to finding Ledoux and the Iron Crusaders' meth cook — and escape the mounting violence while calling Marty to pick them up.

As they drive away from the massive tangle of sirens, gunshots, and police cars, it seems pretty clear that Ginger is in no position not to tell Rust where Ledoux is. But apparently, we're in no position to find out before next week, because this week, True Detective settled on a good old fashioned cop show cliffhanger.