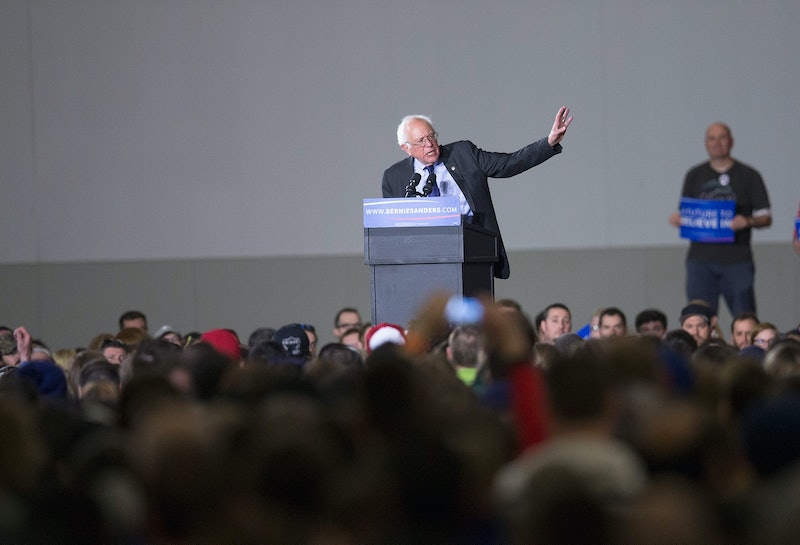 More often than not, presidential candidates seek out endorsements from members of a state's political scene before going into that state's primaries. For Bernie Sanders, that rule doesn't apply to Wisconsin or its Republican governor, Scott Walker. During a rally on Saturday in Madison, Sanders openly criticized Walker before a crowd of 8,000 people. Madison, a college town that's a mecca for progressiveness and places great concern on the way money corrupts politics, has found its Democratic candidate.

According to the Wisconsin Radio Network, Sanders spoke about Walker more than he did about his competitor for the Democratic nomination, Hillary Clinton. In fact, he mentioned his opponent by name only while stating that the two agree that a Republican cannot be elected president. He went on to criticize a voter ID law Walker passed in 2011. The 2016 primary will mark the first time Wisconsin voters have to show certain approved forms of identification before voting:

Democracy means one person and one vote, and whether Governor Scott Walker likes it or not, that is exactly what we are going to bring to every state in this country, including Wisconsin. And I say to Governor Walker and all of the other cowardly Republican governors: If you cannot win or participate in a free and fair election where everybody votes, get out of politics and get a new job.

Presenting a simple ID shouldn't be an issue. However, a $500,000 public service campaign mandated by the bill which was intended to educate voters was abandoned. Some estimate that over 200,000 voters will be turned away because they were not properly informed about the new requirement. Sanders also shared Madison's outrage over Walker's financial support from the conservative Koch brothers:

Sanders probably meant to say $900 million. In January 2015, the brothers announced they would be spending around $1 billion on the 2016 campaign — almost twice what they spent in 2012. According to The New York Times' Nicholas Confessore, infiltrating the political system with that amount of money would make them equally as powerful as the Democratic and Republican Parties themselves. In August 2015, Scott Walker received a large sum of money from the Koch brothers' donor groups during a straw poll. They also funded his efforts to shut down workers' unions in Wisconsin prior to that. This is the corporate corruption of politics that Sanders is speaking against when he refers to the system as an "oligarchy."

In a fundraising email sent in the days following the rally, Sanders remained steadfast in his opposition to the governor, who has taken funding away from K-12 public education, public parks, healthcare exchanges, mental healthcare, Planned Parenthood, and workers' unions.

Wisconsin Governor Scott Walker and the Republican Party weren't as happy to see me. Governor Walker, who has been helped throughout his career by the Koch Brothers, issued statements against us, and the GOP event put up billboards calling me an ‘extremist.’ Well, let's talk about extremism. Scott Walker has attacked the minimum wage, gutted unions, made it harder to vote, and restricted access to abortion. That is extremism.

Sanders and Clinton can agree on that, at least. During the beginning of her campaign in September 2015, Clinton made a stop in Milwaukee and asked the crowd what went wrong in the state. They screamed "Scott Walker."

It seems to me, just observing him, that Governor Walker thinks because he busts unions, starves universities, guts public education, demeans women, scapegoats teachers, nurses, and firefighters, he is some kind of tough guy on a motorcycle, a real leader. Well, that is not leadership, folks. Leadership means fighting for the people you represent.

Clinton made a sharp jab against Walker's stance on women's rights as well at the event, which was titled "Women for Hillary."

Based on Sanders and Clinton's mutual disdain for Wisconsin's governor, its safe to say that these rare moments of outspoken insults will help both appeal to the state's fed-up Democrats. However, each candidate may find pockets of support in separate sections of the state. It's no coincidence that Clinton spoke in Milwaukee, where there is a larger percentage of African Americans, and that Sanders rallied in Madison, where there's a plethora of progressive college students. Wisconsin holds its primary election on April 5 and will offer 96 Democratic delegates in total. For Clinton and Sanders, it's a race between who can advocate for change in Wisconsin more effectively.