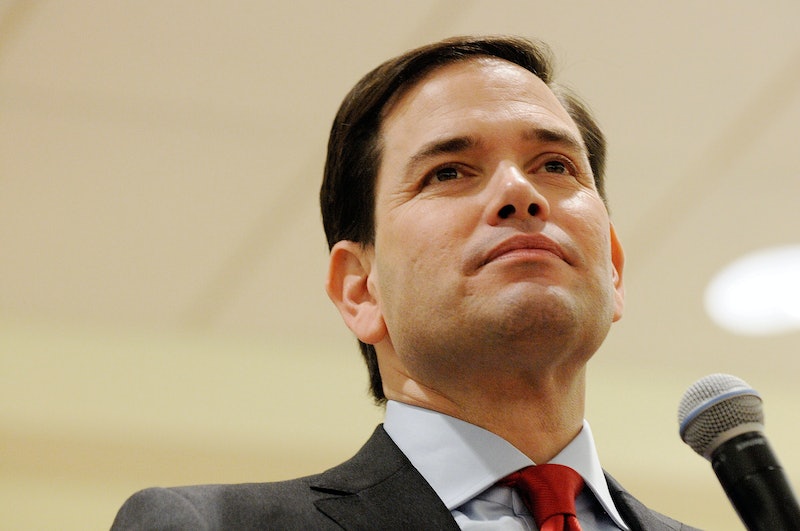 Let's face it: The GOP is gearing up for a contested convention in July, and Marco Rubio is lending a helping hand. The Florida senator has been mostly silent since suspending his presidential campaign immediately after losing his home state to Donald Trump on March 15. But now, Rubio's asking for his delegates to remain bound to him at the Republican National Convention, in a last-ditch effort to stop the billionaire GOP frontrunner from becoming the party's nominee. Although he couldn't beat Trump himself, Rubio's still willing to do whatever it takes to keep him out of the White House.

Rubio sent a letter to all 21 states that contributed to his total 171 delegates in the Republican primary election, asking that they stay committed to voting for him. "Of course, he's no longer a candidate and wants to give voters a chance to stop Trump," Rubio spokesperson Alex Burgos told CNN. According to the former candidate, suspending his campaign didn't mean that the delegates he won should become free agents who can vote for whoever they want, as normally happens when a candidate drops out. Because individual state party branches determine the rules for their delegates, they could choose to grant his request.

The full request Rubio sent to the chair of the Alaska Republican Party reads:

I write this letter to inform you that the decision to suspend my campaign for President of the United States is not intended to release any National Convention Delegates bound to me as a result of the 2016 delegate selection process that took place in your State. It is my desire at this time that the delegates allocated to me by your rules remain bound to vote for me on at least the first nominating ballot at the National Convention.

Peter Goldberg, the Alaska Republican Party chairman the letter was addressed to, told NBC News' Ari Melber that he will go along with Rubio's plan. Because the state Republican Party's rules specifically say that a candidate's delegates can be removed when they drop out, Goldberg said that he decided to interpret Rubio's "suspended" campaign to mean something else, allowing him to keep his votes.

A former presidential candidate asking to keep his delegates is unprecedented, and proves that the Republican Party is willing to take extreme action to keep Trump from winning the nomination. Though not a huge number, Rubio's more than 100 delegates could help ensure that the convention is contested, leading the way for all the delegates to become unbound and vote for any candidate they choose to. The Florida senator might be holding on to a sliver of hope that he'll be the nominee, hoping a contested convention results in GOP leaders rallying behind him. Or it could just be a ploy to stop Trump and help Ted Cruz secure the ticket. Either way, it's a bold move.

More like this
Michigan’s Governor Is “Going To Fight Like Hell” To Protect Abortion Access
By Andrea Zelinski
LGBT+ Men Fleeing Afghanistan Were Denied Asylum By The Home Office, New Findings Show
By Sam Ramsden
Cardi B Explains To David Letterman Why She Uses Her Star Power For Politics
By Jake Viswanath
Kim Kardashian Remembers Her Last Words To Death Row Victim Brandon Bernard
By Jake Viswanath
Get Even More From Bustle — Sign Up For The Newsletter