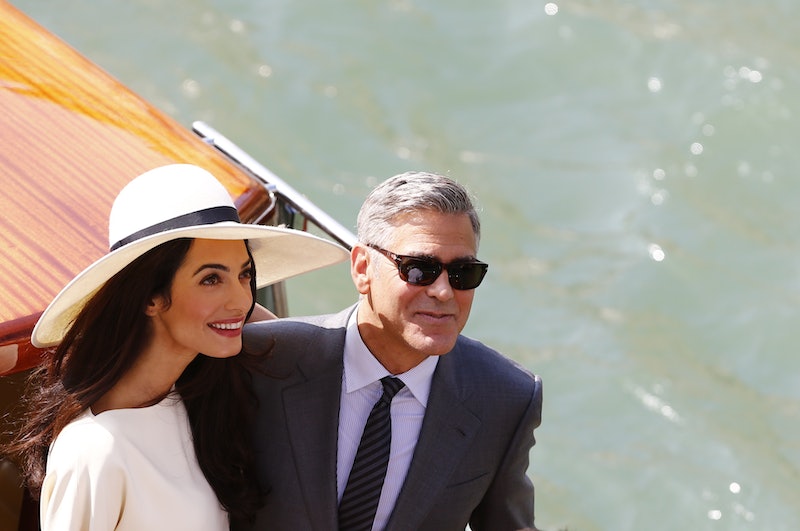 Whether you're wedding obsessed or cringe just hearing the words "baby's-breath," it's always fun to hear about the most over-the-top celebrity weddings. After all, it taps into the whole fantasy of a real-life fairy tale, with real people (albeit extremely rich and famous ones) and, let's be honest, it's hard not to get swept away in the excitement of someone else's lavish affair (especially when you don't have to pay for it or pick out a dress!). Celebrity weddings simply aren't like real people weddings, and that's what makes them so much fun. Many celebrities actually do go the traditional route by marrying in a house of worship, while some prefer a beach wedding, and others choose a château. There are so many cool celebrity wedding venues that it's dizzying to think about.

Of course, most of us will never get to experience a wedding like this, nor even be invited to one, so it's definitely challenging to keep from being totally envious. But it's OK to daydream about being married in a medieval Italian villa or a French castle — I'm not here to judge! You can totally pin these weddings to your future wedding Pinterest board... dare to dream, amirite?!

When the world's most famous bachelor gets married, there are some seriously high expectations for what the wedding should be like... and Clooney didn't disappoint. In 2014, Clooney and Alamuddin were married at the Aman Canal Grande resort in Venice, Italy, which is a seven-star hotel (I literally didn't know until right now that there were more stars than five!), and their weekend-long celebration took guests all over Venice before the ceremony. According to People, "crowds cheered along Venice's Grand Canal as Clooney and his guests boated to the Aman hotel in a flotilla of vintage water taxis." So casual, right?

After famously declaring they wouldn't get married until gay marriage was legal, the couple did, in fact, exchange vows in 2014 in the south of France, at Château Miraval, a château and vineyard that the couple owns... NBD. According to Brides, Miraval is "a 1,000-acre, 17th-century compound where you can put all your guests up in the estate's reported 35 rooms, serve wine from your own vineyard, and keep onlookers out with a moat." An actual moat! Is this real life?!

Let's be real, no one actually thought the Kardashian-West brood would settle for a simple church ceremony and backyard reception, right? These two kept guests on their toes by beginning their wedding celebration in Paris, complete with a rehearsal dinner at Versailles, only to whisk them off for a surprise wedding ceremony in Florence, Italy. They were married at the historic Forte di Belvedere, which reportedly costs more than $400,000 per day to rent. The villa has been around since the 1590s, and provided the perfect backdrop for Kardashian's fairy tale wedding to West, selfie station and all.

Legend and Teigen tied the knot in 2013 at the Villa Pizzo in Lake Como, Italy, at the site where they fell in love. Swoon. The villa is located on the Italian hillside, overlooking the lake, for a picturesque view from all angles. They also filmed Legend's music video for "All of Me" in the days leading up to the wedding, with the end of the video showing footage of their special day. Legend wrote the song for Teigen. Are you melting in a puddle on the floor yet?

In a wedding fit only for a couple like Lively and Reynolds, the duo exchanged vows at Boone Hall Plantation, in Charleston, South Carolina in 2012 on the 738-acre property. The couple added plenty of Southern charm to their day, which was also featured as Allie's summer home in The Notebook (obvs) and is still a working farm. Martha Stewart's team helped decorate, so obviously no detail went unnoticed, including an overflowing dessert spread (Lively is an avid baker) that would make anyone's mouth water.

The second most famous couple in all of England (we'll get to the first couple later!) tied the knot at Luttrellstown Castle in Dublin, Ireland, in an affair fit for fashion royalty. According to Condé Nast Traveler, "The exorbitant celebration included an 18-piece orchestra, fireworks display, and a reception for their 230 guests. Aside from the gourmet food, the reception featured a black and white dress code and two gold thrones for Posh and Becks." Did you expect any less from these two, though?

Though their marriage was short-lived, their 2010 wedding was just as over-the-top and outrageous as they were, taking place right next to a tiger sanctuary at a resort in India. Seriously. According to Condé Nast Traveler, "Their chosen venue was the Aman-i-Khás resort, a five-star hotel where guests sleep in tents next to India's Ranthambore Safari Park. The duo provided their guests with a full week of entertainment, from exotic tiger safaris to a 12-hour wedding celebration. If you're wondering how to make your own wedding last 12 hours, consider adding snake charmers, elephants walking down a red carpet, and acrobats to your itinerary." Dare to dream!

When Dion and the late Angélil wed in 1994, the music legend made sure her wedding was fit for a diva of her stature, taking place at Montreal's stunning Notre-Dame Basilica. The couple allowed fans to wait outside the church, and it was also broadcast on live TV. Further than that, Dion wore a "seven-pound tiara made of 2,000 Austrian crystals, a 20-foot train and a Mirella and Steve Gentile-designed gown that took over 1,000 hours to complete," according to Us Weekly . The 500+ guests danced to a 21-piece orchestra while artificial snowflakes fell. Seriously.

The royal wedding to end all royal weddings, no list of celebrity weddings is complete without the 2011 wedding of Prince William and Duchess Kate. The nuptials took place at Westminster Abbey, and was just as opulent and beautiful as a wedding could possibly be. Thousands of onlookers stood by to watch from afar, while millions around the world watched a live telecast as the couple said "I Do." They had an open carriage processional, and the guest list had nearly 2,000 people. So all in all, a pretty low-key, casual affair... right?

Though they've since divorced, Holmes and Cruise's wedding was one for the celebrity record books — if such a thing exists! Held at the Odescalchi Castle in Bracciano, Italy in 2006, the pair had around 150 guests, and the ceremony "was held inside a beautiful converted 15th century armory, with the entire event costing somewhere in the region of $3.5 million," according to Venuelust. In addition, the site reported that "Following the luxurious dinner catered for by Cruise's favorite restaurant in Rome, Dal Bolognese, guests watched a mesmerizing fireworks display which was accompanied by classical music." I mean, there simply aren't words.

Not to be outdone by other Italian weddings, Timberlake and Biel wed at "Borgo Egnazia, a five-star hotel on 50 acres of land, dotted in olive and lemon trees, that overlooks the Mediterranean," according to Brides, and they reportedly rented out the entire thing! According to Pursuitist, Timberlake and Biel "rented out the entire hotel, paid for their guests’ flights, and hired security staff, not to mention helicopter tours for their guests to take in the Italian surroundings." The wedding celebration ended with live music and fireworks, E! News reported. Where was my invite, guys?!

I may be alone here, but these extravagant weddings give me major wedding fever, and the only cure is to obsessively stalk their wedding photos. Don't mind if I do!