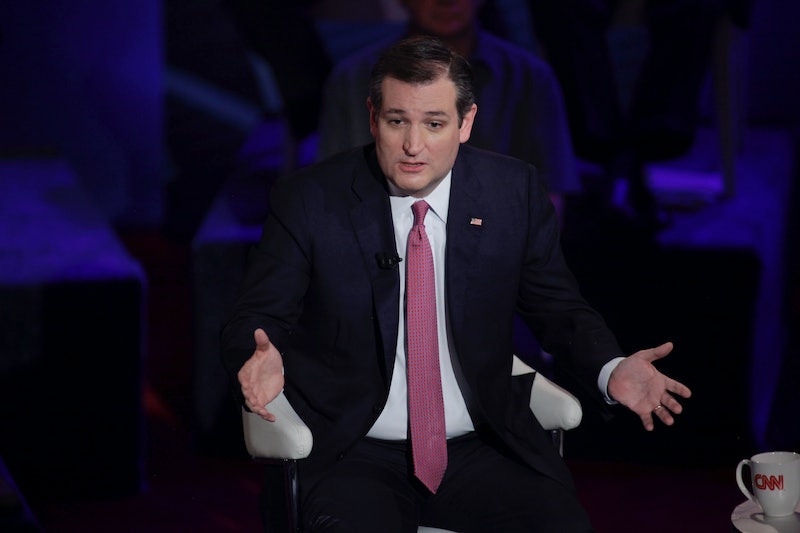 At the GOP town hall in Wisconsin on Tuesday, Ted Cruz was asked why women should support him. The Texas senator astutely noted in response that "every issue is a woman's issue." Of course, Cruz meant it in a way that dismissed the issues traditionally thought of as "women's issues" — things like women's healthcare, reproductive justice, and domestic violence legislation — to instead redirect back to his platform objectives of "jobs, freedom and security." But you know that old cliche about how a thousand monkeys typing random words on typewriters will eventually accidentally write a great American novel if you give them enough time? This was Cruz's monkey-typewriter moment.

Cruz incorporated heavy praise for his mother and his wife. "When you're married to a strong woman professional, you see the nonsense that women deal with in the business environment. You see the garbage they put up with. And it makes you mad," Cruz said, in an admittedly touching sound bite.

When I'm evaluating a politician, it's important that they recognize the way different policy issues intersect — especially within the realities of systemic inequality — and that their policies and voting record reflect that kind of consideration. If a politician is truly viewing "every issue" as a woman's issue, then it should be obvious that a woman's access to "jobs, freedom and security" hinges on a government that protects her right to pursue those things despite the barriers of sexism, racism, classism. Although Cruz was able to demonstrate that he does understand the frustrating ways women have to navigate the world differently due to sexism — he tells a story about his mother, an early computer programmer, finding ways to avoid having her dude co-workers ask her to type for them — the policies that Cruz has supported (and failed to support) during his political career simply don't paint the picture of a politician who is pro-women.

His Continuous Assault On Reproductive Justice

Cruz is notoriously proud of his anti-abortion record, and yet he still claims that he is looking out for women's interests. He is against abortion even in cases of rape or incest, and has some sneaky backdoor plans to get around Roe v. Wade. He's supportive of "TRAP laws" that require abortion facilities to jump through unnecessary hoops in order to be considered up to code by their respective states, which has left 93 percent of the counties in his home state of Texas without abortion facilities, according to the Guttmacher Institute.

His Dismissive Approach To Anti-Domestic-Violence Legislation

When Ted Cruz voted against renewing the Violence Against Women Act (VAWA) back in early 2013, he said his reasoning was a matter of state's rights. Cruz's office released a simultaneously baffling and infuriating statement explaining his vote: "[Cruz] voted against this federal law because stopping and punishing violent criminals is primarily a state responsibility, and the federal government does not need to be dictating state criminal law." The reauthorization of VAWA (which ultimately went ahead) also included protections for the LGBT community, Native American, and immigrant populations, as well as much-needed funding to take on the extreme backlog of rape kits. But that didn't change his vote.

Cruz has not left much up to debate when it comes to his stance on LGBT rights. His "religious liberty" platform essentially decimates protections for gay, lesbian, transgender, and gender-nonconforming individuals at every turn. Whether he's voting against ENDA ordinances in Texas which would have protected LGBT Americans, working closely with the heads of anti-LGBT hate groups (like Family Research Council President Tony Perkins), or being dickish about pride parades, it's clear that Cruz is no friend to LGBT Americans. Of course, this statement from Cruz speaks for itself:

“When a mayor of a city chooses twice to march in a parade celebrating gay pride, that’s a statement — and it’s not a statement I agree with.”

His Glaring Ignorance About Birth Control

If Cruz's opposition to the Affordable Care Act and just about any financial support for women to access contraceptives weren't enough, it's also become increasingly apparent that he simply doesn't understand the different reasons women use contraceptives, and why it's imperative that a variety of forms are accessible. In Cruz's mind, it's a-okay to flippantly declare that women can get "rubbers" (ew) and thus have more than enough birth control care.

Specifically, Cruz said at a rally in Iowa last December that, "Last I checked, we don’t have a rubber shortage in America. Look, when I was in college, we had a machine in the bathroom. You put 50 cents in and voila. So yes, anyone who wants contraceptives can access them, but it’s an utter made-up nonsense issue. That's right, he called it "an utterly made-up nonsense issue." That all but proves that Cruz is unable to recognize the need for contraceptives beyond a reductive, heteronormative lens of penetrative sex. (Also: So, so sorry for including Ted Cruz and penetration in the same sentence.)