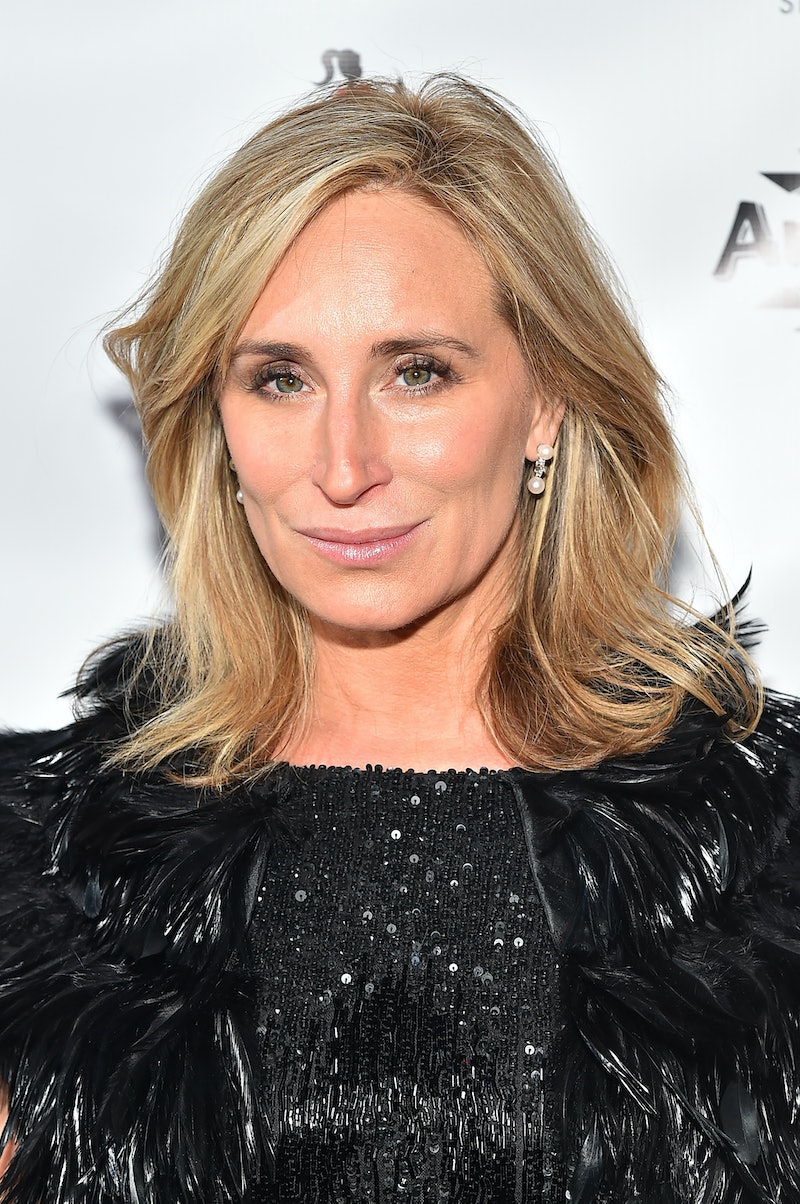 "Soooooonnnnnn!!!!" Ramona Singer exclaims on the step-and-repeat when her BFF Sonja Morgan shows up to the pair's Real Housewives of New York City Season 8 premiere party. (It was, of course, held at the RHONY ladies' favorite hotspot, Jon Bakhshi’s restaurant Beautique.) Immediately, the two begin laughing and posing together, and simultaneously making my dreams as a Real Housewives fan come true. With reality TV you never know what's actually real, but the love these two have for each other is palpable; you can see how much they genuinely enjoy being together. Another Real Housewives "claim" that was pleasantly confirmed during the party? Morgan is just as sweet and quirky as you thought.

During the night I both overhear the 52-year-old entrepreneur talking to a reporter about her interns (She's had interns for 30 years, apparently! Who knew!) and greet her infamous gossiping facialist by literally saying, "This is my facialist." These two moves show that, one, the facialist is real and just existing in the world as if she's not the gossiping facialist, and two, that the way Morgan talks and acts on the show is exactly how she talks and acts in real life.

After seeing Morgan and Singer interact in person, I ask the reality star/designer/toaster oven maven about her all-time favorite Ramonja moment from the show. "Oh god," she says. "Well, she's always telling me what to do and being overly dramatic, so that's pretty funny." It becomes clear to me that she cannot pick just one moment, because their relationship is so deep and there are just too many to choose from. Personally, I'd have chosen this:

This season, though, the pair might become a trio depending on where alliances form. A new Housewife, Julianne "Jules" Wainstein, is joining the series, and it sounds like she and Morgan will be getting along just fine. "Jules is great. One of my best friends grew up with her husband, so he and I are two peas in a pod — her husband and I. And Jules and I are like the class clowns, we're both silly," she says, before adding, "She's very sensitive and an open book... which leads you to be picked on." It also sounds like Wainstein will fit into the group seamlessly, because Morgan isn't her only connection: "She knew a lot of us. She knew a bunch of us."

When it comes to the storylines we'll see from Morgan specifically this season, she says viewers will hear about her "reconnecting with my friends after the beating I took last season — and about my businesses." During Season 7, fans watched Morgan's fellow Housewives question everything from her partying to her clothing line to her "international lifestyle brand." As for how her wide array of ventures are going now, she says they're going "Very well. I couldn't be happier."

I also ask her which Housewives city she would join if she wasn't on New York. "I had a place in L.A. before I got married and I should've bought that place. It was less then a million bucks — then. I bought the place in France instead. I'd have to say L.A." I assume she means Real Housewives of Beverly Hills, but that doesn't matter because she goes on to say, "I'm an international girl. It's hard to do, but maybe Melbourne. Ladies of London, for sure. I'm friends with those girls. I know Caroline Stanbury. I see her in St. Tropez and I see her in Phuket in Thailand."

Yep, she's exactly how I imagined.

Check out Sonja Morgan on Real Housewives of New York City when it premieres April 6.