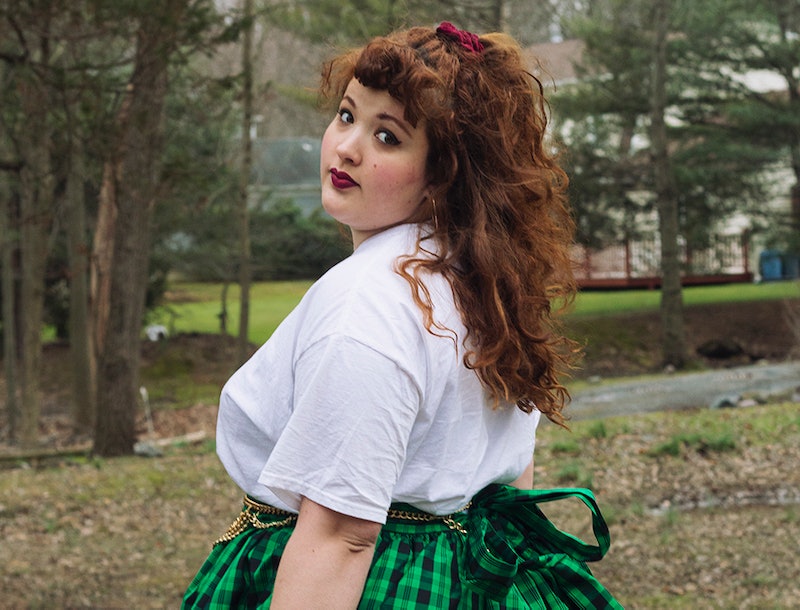 When it comes to large bodies, there are a myriad of reasons people are fat. These can include, but are nowhere near limited to, genetics, Polycystic Ovarian Syndrome and other hormonal disorders, finances and poverty, as well as diet and exercise routines. There's another reason, though. It isn't cookie-cutter, and it doesn't gratify the good fatty complex or anyone's need to make sure you "can't help being fat" before deeming you worthy of the most basic human tolerance. Some folks are fat because they actively want to be fat. And you might be one of them.

If you're anything like me, you might be somewhat predisposed to fatness (the aforementioned genes and PCOS contributing to your shape in certain undeniable ways). But perhaps there's more to it than that. Maybe you could be thin if you wanted to — the pool of genes and hormones unique to you and your body facilitating lost sizes when you only consume certain foods and put your gym membership to use. Maybe you've even done it before: Lost a bunch of weight because that's what all fatties are supposed to aspire to. That's what all fatties "should do" if they want acceptance and proper medical care and equal employment opportunities and representation and airplane seatbelts that fit. But maybe you then realized that the thinner body — no matter how exalted by the masses, and particularly by those around you — somehow wasn't your body. At least not one you ever actually wanted.

Losing weight never helped me feel better about myself. This isn't true for everyone (nothing ever is), but the more weight I lost, the unhappier I felt. It was somehow never enough, and my younger self conceptualized that to mean I needed to keep going.

But on the very rare occasions that I encountered a fat woman in an outfit that read, "I give zero fucks," or, "I'm totally feeling myself," I felt something I can only describe as envious curiosity. I perceived not only aesthetic beauty in the way such women looked and dressed themselves, but something like... empowerment. It would take me years, a lot of fat acceptance literature, stumbling upon a late '90s copy of Marilyn Wann's FAT!SO? , and an introduction to feminist ideals, as well as an intro into the world of BBW models, to even start to consider that maybe, just maybe, I actually liked being fat. Maybe it was what I wanted.

In the time since, I've gained something like 100 pounds. It wasn't even all that hard. Although I have PCOS and a slow metabolism, they didn't contribute to the circumference of my jelly belly quite as much as my distaste for sporting activities and adoration of food. And I mean the "bad" kind of food. The stuff we've been told makes us less moral and "good" than our kale-eating counterparts. The stuff so often equated to "cheating" and being weak-willed or lazy or unintelligent.

It's quite likely that if you're a fat person who actively wants to be fat, you've read more than a thing or two about health. Maybe you keep track of things like your insulin levels through at-home kits, or you own a visceral fat scale to make sure you maintain your subcutaneous fat (the visible fat you can see and touch) but keep your visceral fat (the kind of fat that basically wraps itself around your organs) in check. Maybe you work out regularly, and eat really healthily.

Or maybe you don't. Perhaps you eat the things you see fit because they make you happy, or you feel downright sexy when singlehandedly downing a family bucket of KFC. Heck, maybe food intake has nothing to do with your higher weight at all. But you've chosen not to "do anything about it" because you enjoy living in your fat body so much. You don't want to change, and don't believe anyone has the right to make you do so: Your health and pant size are of no consequence to others, after all. I don't believe that any one of those scenarios is better than the other — no one of them more moral or "good" or praiseworthy. If there's no right way to have a body — something fat acceptance rhetoric has been preaching for decades — then there also mustn't be a right or wrong way to live in that body.

This is why you, fat person who wants to be fat, might shudder when a very likely well-meaning person jumps to your defense on Instagram to tell a troll to leave you alone because you probably "can't help being fat. Most fat people are fat because of their genes or because of illness." It's why you feel uncomfortable when folks try to justify their weight to critical people — since no matter the reason for anyone's weight, it should never be a thing that needs to be justified. It's why you wish there were people in mainstream body positive dialogue saying, "I love being fat. I want to be fat. And I'm fat for those reasons."

There's a big chance that you believe it's OK to have preferences, too. The fact that you gravitate towards living in a fat body doesn't mean you hold prejudices towards thin ones. The latter just isn't right for your own self.

Maybe you're even sexually empowered by your fatness in a way that goes beyond being "OK" with how you look or even having mildly affectionate feelings towards your shape. You delight in the softness of your fat, and in the way it actually looks. Rolls, cellulite, stretch marks, jiggliness, back boobs, bingo wings: All of those things are a part of your self-love. They aren't nuisances or characteristics you'd want to zap away with miracle creams and waist trainers. They're things that make you palpably content, strong, and fulfilled. Maybe even healthy — mentally, physically, spiritually, or a combination of two or more of those.

You might even sexually connect with your fatness in such a strong way that you'd rather date or fuck or love someone whose preferences align with your own. Someone who doesn't like you in spite of your fat, but who loves the look, feel, and radicalness of fatness that is consciously embraced. Someone who believes that fatness, in all its squashy malleableness, can be an undeniable turn-on. You feel allowed to have those preferences, in the same way anyone else is entitled to their own sexual or romantic (consensual) choices. And that's because you are allowed.

No matter how you've chosen to go about maintaining your weight or gaining weight or whatever else you've done to keep or get your fat body fat because that's the way you prefer it, know that choice is yours to make. You don't have to be a good fatty, utilizing a healthy diet, penchant for cardio, or clinical diagnosis as reasons for why you deserve to be treated like a human being. Nobody should have to do that.

Even if fatness was an illness in and of itself — the rolls on your body the "epidemic" they're so often made out to be — just ask yourself of what other illness people would make these demands of. Ingrained perceptions of fatness are never just about health. They're about class and race and blatant prejudice for a characteristic that has been deemed aesthetically undesirable, if not physically revolting. But how much or how little of your life is focused on health is your decision alone to make, in much the same way that your interpretations of health or beauty or desirability are your own to define.

I don't know what I could really compare that experience to, other than gut instinct — the same sort of instinct that might make someone know, beyond a doubt, that they'll always prefer mint chocolate chip ice cream to pistachio. Although admittedly a little more important than that. I think I would've figured this out a long time ago, had fatness not been — in both my Colombian culture and my American culture, and much of the rest of the world — presented to me as a problem. Not only an aesthetic crime, but a moral one.

Wanting to be fat (much like wanting to be thin or in-betweeny or athletically built) isn't something I, or anyone else, should have to defend. But it is something I want to talk about more. In radical fat acceptance conversations, it's pretty much acceptable to say that you actually enjoy being fat; that you see beauty in it, that you see beauty in the fatness of others, and that you feel empowered by the way you look. In mainstream conversations and day-to-day interactions, that isn't remotely the case. If you are fat, and you are not publicly trying to "fix" yourself, you need a reason and an excuse. You need proof that you're healthy regardless. You need proof that your weight "cannot be helped." Saying you're fat because it's something you want remains more or less off limits, and certainly not something met with respect for one's choices.

I'm over it. As is the case for most people, I am fat for a few reasons. But the main one is simple: That's how I like it. Some people aren't fat because of illness or the financial burdens of "eating clean" or because their parents are fat, too (not that there's anything wrong with that). Some people just want to be fat.

If you're also one of those people, please know that it's OK. Know that you aren't shoving your beliefs and preferences down anyone else's psyche. You aren't claiming that everyone should be attracted to you. You get to decide to what degree health matters to you, much like everyone else. You get to decide how you go about maintaining your weight. You get to decide what to dress in, or what kinds of people you want in your life — romantically or otherwise. You get to be autonomous over your body. You get to rock your own unapologetic fatness.