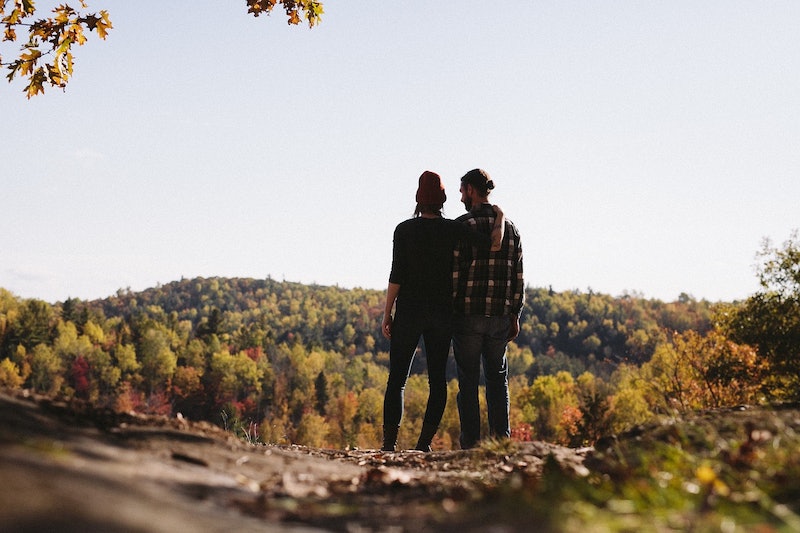 Being in the dating game can stink. I don’t know about everyone else, but I find the constant questioning on whether a potential love interest is into you to be rather grueling. According to research, there are actually ways to tell if someone is into you, though — and they’re quite simple to pick up on. If you pay close attention to some nonverbal cues, you might find out someone is into you way before they actually tell you those words themselves.

If only the world were so easy that someone would just tell us when they were interested in us. As most of us know, though, such is not always the case. A lot of times males and females alike will play games, leaving daters feeling completely clueless as to how they feel (perhaps because they are nervous or fear rejection, but that’s a topic for another day). However, by zoning in on cues other than their spoken words — like body language — you can gain some great insight into how these people feel about us.

Many of the clues in front of us lie in the nonverbal. According to David Givens, PhD, author of Love Signals: A Practical Field Guide to the Body Language of Courtship, in his Match.com advice article, “For the past 500 million years, every member of the animal kingdom has utilized certain signals to communicate their interest in mating... Seeing any one of them may signify physical attraction.” That’s said let’s talk about what some of those signals could be. Here are six ways to tell if someone is into you, according to science.

Love Signals: A Practical Field Guide to the Body Language of Courtship, $15, Amazon

1. He Or She Points Their Feet Towards You

Wondering whether that cutie is into you? Check out their feet. According to researcher Lisa Daily, author of Stop Getting Dumped! All You Need To Know to Make Men Fall Madly in Love With You and Marry ‘The One’ In 3 Years or Less , when someone likes you, they’ll turn their toes to point towards you. Daily told wrote in Huffington Post, “Our bodies line up when we’re in love (heart to heart, face to face).” In a separate Huffington Post article, body language expert Vanessa Van Edwards reported the same notion based on her research stating, “When the feet are pointed directly toward another person, this is a sign of attraction, or at the very least, genuine interest.”

Stop Getting Dumped! All You Need to Know to Make Men Fall Madly in Love With You and Marry 'The One' In 3 Years or Less, $12, Amazon

2. Their Palms Will Be Sweaty

Having a racing heart around someone we’re attracted to isn’t a myth — it’s reality. Studies have shown if you’re nearby to someone you find attractive, your heart rate will increase, according to CNN. Oppositely, if someone is attracted to you, their heart will begin beating fast as well. Why? Scientifically, when you catch sight of someone you like, your heart begins racing due to an adrenaline rush, according to Dr. Reginald Ho, a cardiac electrophysiologist and associate professor of medicine at Thomas Jefferson University Hospital in Philadelphia, Pennsylvania, who spoke to CNN on the topic. The brain signals the adrenal gland, which secretes hormones like adrenaline, epinephrine and norepinephrine. Ho said these hormones flow through the blood and then the heart rate increases.

While it’s obvious to us when our own heart is racing, it might be difficult and flat-out weird to try to get someone else’s pulse, but if an easy way to tell if that heart rate is going up, up, up is if that person in question has particularly sweaty palms. CNN also spoke to Timothy Loving, assistant professor of human ecology at the University of Texas, Austin who said, “Part of the whole attraction process is strongly linked to physiological arousal as a whole. Typically, that's going to start with things like increased heart rate, sweatiness and so on.”

3. He Or She Will Lean In Towards You

Stop and take notice if someone is physically leaning in towards you, as this is yet another sign they’re feeling you. University of Kansas researchers studied flirting and found people tend to lean into someone they’re interested in, and adopt an open body posture.

4. They Walk At Your Pace

According to LiveScience.com, research shows individuals will match their pace when they’re in love. For the person you’re currently curious about, this means they’ll tend to speed up walking when you do, and slow down when you do as well, making sure you are moving along at the same pace as you stroll. The point was made even clearer when researchers also found individuals didn’t do this same extent of pace-matching when walking with friends.

You’ve likely heard before that lingering eye contact is one way to tell if there is attraction between two people, and it’s true. According to Scientific American, research has shown people who hold eye contact reported increased feelings of passionate love and affection towards the other person. The suggestion from this study, the outlet noted, is that long periods of eye contact can connect you to someone. If that person you’re wondering about gazing deep into your eyes on the reg? Take specific note of this — it could mean he or she is feeling much more towards you than simply friendship.

6. Speaking Of Eyes, Their Pupils Will Dilate

Let's say Mr. or Ms. Right is holding that lingering eye contact with you that we just discussed — now what are their pupils doing? According to The Chicago Tribune, research out of the University of Chicago showed if someone is looking at something or someone they like, their pupils will dilate in a completely involuntary way. In addition to pupils dilating when people see something they like, the research also showed pupils will do this is the eyes are looking at something the person finds interesting. Either way, if those pupils are enlarged, take the hint.

Next time you’re around the person in question, take special note of the above nonverbal cues. If the person is exhibiting some of them, chances are they’re totally feeling you.