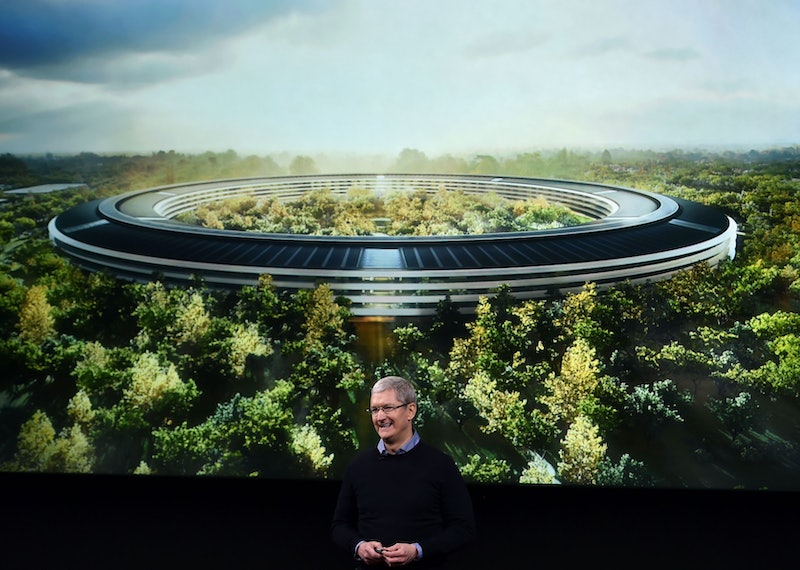 If you're a devotee of Apple's sleek line of consumer products ― whether it's the iPhone, iPad, iPad Pro, or what have you ― odds are you've got a fair amount to look forward to in the weeks and months to come. But even after Apple's keynote last week, which unveiled the new 9.7-inch iPad Pro, and the iPhone SE (a return to the compact 4-inch style of the iPhone 5S), there's still a big question looming on the horizon: When will we start getting some rumors about the iPhone 7?

Luckily, there's already speculation swirling around the new phone's eventual release, right down to when it'll ultimately be revealed. It makes sense that people are so curious, given that the new iPhone model recently teased by Apple CEO Tim Cook was more of a throwback. It's a very welcome one for anyone who's not into the big-screen life, to be sure, but not quite as new or revolutionary a design shift as you might be clamoring for. After all, at least half the fun of new tech is in the anticipation, and then the dramatic unveil. Here's what some of the reports flying about suggest about how the iPhone might change in this coming generation, and what it could mean for you as a consumer.

One of the hot rumors regarding the iPhone 7, by way of KGI securities analyst Ming-Chi Kuo, is that it'll abandon the fully-flat screen shape in favor of a slightly curved interface, one that would stretch all the way across the front of the phone. Specifically, he's predicting a 5.8-inch curved glass display.

If the concept of wireless charging bends your brain a little bit, you're not alone. There's something about it that screams "distant future," even though the technology is already in public usage in various forms. And as Dylan Martin detailed for Bostinno, it's one of the new technologies that Apple has reportedly been examining, raising the possibility that the days of charging your iPhone via Lightning cable could be coming to an end.

But if you're a tried and true fan of the Lightning cable, then never fear ― just because it could be usurped by wireless charging doesn't mean it would go away completely. One of the major rumors about the next iteration of the iPhone is that it'll be, you guessed it, the slimmest model yet. And getting it even slimmer could mean that the headphone jack has to go, in favor of plugging your headphones in through ― that's right! ― a Lightning cable.

4. Made From Glass, All The Way Around

You might not remember if you weren't an iPhone 4 or 4S owner, but those models had something that the latest iterations don't: They were glass all the way around, from the front to the back. Nowadays, the backs of the iPhone 5, 5S, 6, and 6 Plus are made out of aluminum instead. But yet another one of Kuo's predictions is that the iPhone 7 will go back to the all-glass style, which would make for a smoother, sharper aesthetic, although it could also make your phone more vulnerable to cracks or shatters. Which is a good point to keep in mind: No matter how much dexterity you've got, always use a case! Don't risk it, because you never know what might happen, and there are some incredibly durable cases out there that you'll have to work real hard to break.

More like this
Using Your Pet’s Name As A Password? Here’s Why You Might Want To Change It
By Cristina Sanza
100 Clever Gifts Under $25 When You Have No Idea What To Get
By Maria Cassano
The 10 Best Waterproof Watches For Swimming
By Lauren Moison
Amazon Keeps Selling Out Of These Clothes With Near-Perfect Reviews
By Allison Bolt
Get Even More From Bustle — Sign Up For The Newsletter