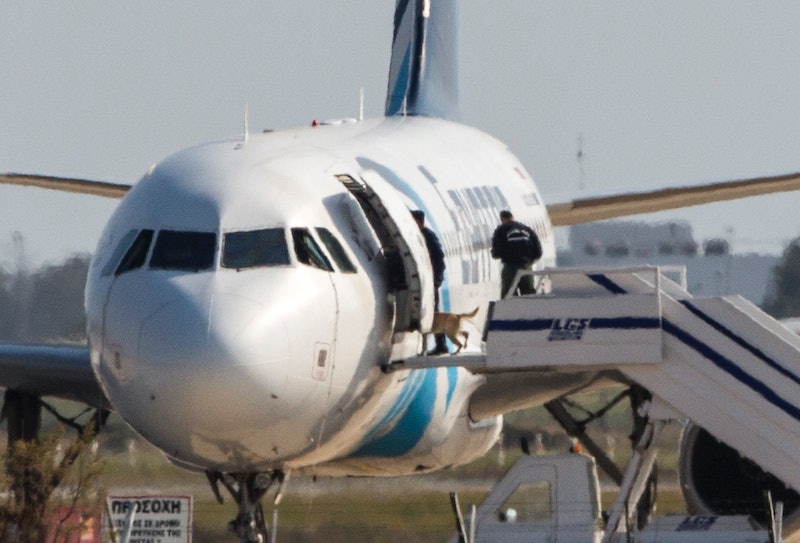 In the aftermath of Tuesday's EgyptAir hijacking, the self-proclaimed "selfie man" has volunteered his side of a wacky story that was fortunately resolved peacefully. While the plane was en route from Alexandria to Cairo, passenger Seif El Din Mustafa, who claimed to be wearing an explosive belt, hijacked the plane and redirected it to Lanarca, Cyprus, where he asked to see his ex-wife. After over three hours of negotiations between Mustafa, authorities, and the seven passengers he held hostage, the situation was defused and everyone was released without harm. One hostage — 26-year-old British health and safety worker Ben Innes — found a clever way to pass the time as the plane was grounded. He asked to take a selfie with the hijacker, and the resulting photo is historic, not to mention hilarious.

In the photo, Innes flashes a ridiculous grin. Unbelievably, even the hijacker cracks what might be an incredibly awkward, slight smile ... or a look of amused bewilderment. Britain's The Sun newspaper featured the selfie on the front page of their Wednesday edition with the headline "Hijackass." Innes explained that he was just trying to remain optimistic:

I'm not sure why I did it, I just threw caution to the wind while trying to stay cheerful in the face of adversity. We were sitting around waiting. I thought, 'Why not? If he blows us all up it won't matter anyway.'

Well, that's certainly one way to look at it. According to Innes, another passenger translated his request to Mustafa:

He just shrugged OK — so I stood beside him and smiled for the camera while a stewardess did the snap. It has to be the best selfie ever.

The fun doesn't end there. The Guardian reported that The Daily Mail later published a snapshot of a WhatsApp conversation Innes had been engaged in while being held hostage. He wasn't about to let his moment go unnoticed:

You know your boy doesn’t f*ck about!! Turn on the news lad!!!

His friends told the publication that Innes' tomfoolery came as absolutely no surprise. Flatmate Chris Tundogan said, "I find it pretty mental but that’s just Ben I guess!” Meanwhile, other passengers were fearing for their lives, and rightfully so. Farrah El Dibany, who was also on the flight, detailed the scenario to CNN. The passengers didn't realize anything was amiss until the plane diverged from its normal route and began crossing the ocean:

There was a lot of panic and crying on the plane. They didn't tell us anything more. They didn't say what he wants or where we're heading, nothing. We were just kidnapped ... It was very horrifying to be in this situation.

After Mustafa was arrested, authorities concluded that his supposed explosive belt was fake. In a statement to Cypriot police, the hijacker explained his reasoning, which allegedly had nothing to do with terrorism:

When someone hasn't seen his family for 24 years and wants to see his wife and children, and the Egyptian government doesn't allow it, what should one do?

He will remain in custody for eight days and be investigated for suspicion of hijacking, abduction, threatening violence, terrorism-related offenses, and two counts related to possession of explosives.

More like this
Taylor Swift, Kerry Washington & More Speak Out On Uvalde Mass Shooting
By Jake Viswanath
Photos Of Boris Johnson Drinking At A Downing Street Lockdown Party Have Surfaced
By Bustle UK
Rebekah Vardy & Coleen Rooney’s Trial Has Officially Begun
By Bustle UK
How To Support Gun Control Reform Right Now
By Morgan Brinlee and Carolyn Steber
Get Even More From Bustle — Sign Up For The Newsletter