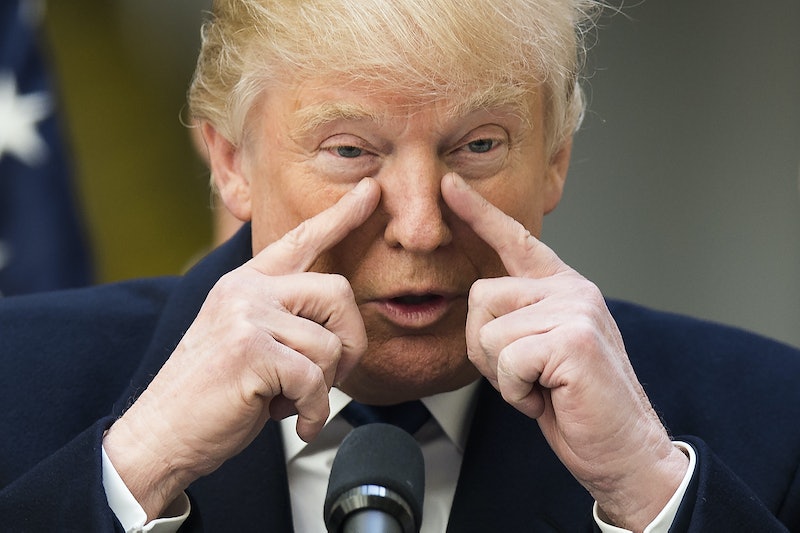 Violence once again broke out at a Donald Trump event Tuesday night, with varying reports stating that a a teen Trump protester was pepper-sprayed and allegedly sexually assaulted outside a rally in Janesville, Wisconsin. There are currently differing accounts of what sparked the incident surrounding the 15-year-old, whom ABC News identified as Alex Drake, and how it escalated so quickly.

ABC News reported that the teen, who appeared in videos to be in a crowd consisting of at least some Black Lives Matter protesters, "exchanged words with a Trump supporter." The Washington Post report of the incident also noted that the girl who was pepper-sprayed outside the Trump rally appeared to be holding a sign that read: “DAMN DONALD. BACK AT IT AGAIN w/ THE WHITE SUPREMACY.” ABC News added that according to the video it obtained, "Drake appears to try and shove the supporter" and that according to eyewitness Michelle Velez, "Drake threw the first punch." Wisconsin State Journal reporter Molly Beck also tweeted an account of the incident, not specifically naming Drake, which is included further down in this article. "This ended with the blonde woman punching that man, then getting pepper spray thrown in her face," Beck tweeted on Tuesday.

CBS News included a statement from the Janesville Police, which notes that the protester in question had allegedly been sexually assaulted by a person in the crowd before throwing a punch. “A 15-year-[old] girl from Janesville was peppered sprayed in the crowd by a non-law enforcement person. A 19-year-old woman from Madison received 2nd hand spray as well. Both individuals received medical attention at local hospitals. A male in the [crowd] groped the 15-year-[old] girl, when she pushed him away; another person in the [crowd] sprayed her," the report states.

According to the Washington Post report on the pepper-spraying incident and alleged groping at the Trump event, the eyewitness who posted one of the videos of the incident and shared it on YouTube, Derek Hauger, wrote, “I was right next to this and saw the whole thing ... The man never touched her like she said."