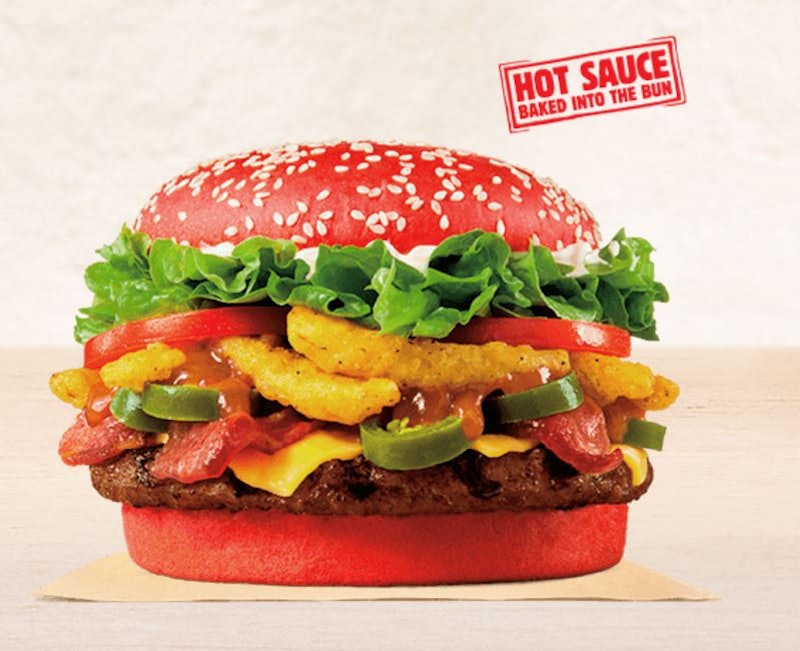 You know, just the other day, I was trying to think of new, inventive ways to give myself heartburn. It looks like I'm in luck, too, because Burger King now has the Angriest Whopper — a burger with a major kick — for a limited time. BK has been on a bit of a roll lately (get it? Roll? Bun? No? Bueller? Bueller?); it wasn't that long ago that their A1 Halloween Burger hit the scene. I mean, how exciting was that?

Now, Burger King is back at it with this ridiculously spicy, OMG-I'm-starting-to-sweat, somebody-grab-the-firehose burger — a sequel to the insanely popular Angry Whopper. (Now he's really ticked off!) This isn't the only time a fast food chain has masterminded a super spicy creation; after all, who could forget Wendy's Jalapeno Fresco Spicy Chicken Sandwich and Ghost Pepper Fries? No one. That's who. Wendy's offering was made with diced jalapenos, Colby Pepper Jack cheese, red onion, and this mysterious ghost pepper sauce; the fries, meanwhile, were also topped with the sauce. Holy cow, my mouth is burning just typing this — and I'm sure I'm not the only one wondering how the Angriest Whopper stacks up in comparison.

Here are all the need-to-know details about BK's new offering, for all of you spicy food lovers out there.

Sandwiched in between a hot sauce-infused bun are jalapenos, bacon, "flaming" onion petals, cheese, and something they're calling "spicy angry sauce." I'm not sure what this means, but it's intense.

2. Why All The Extreme Spiciness?

Super spicy food and limited time specialty items, are both having a moment right now. It's not just the Angriest Whopper and Halloween burger; last year, Carl's Jr. and Hardee's announced what they called the world's hottest burger: the Thickburger El Diablo. And don't forget about all of the delicious limited-time-only drinks Starbucks is constantly dreaming up. Combine spicy with limited edition, and you've got a recipe for success.

The Angriest Whopper makes its debut on March 31, 2016. It's only in select locations, and for a limited time; so you're going to have to check with your local BK to see if they're offering it. You can see where your nearest Burger King is here.