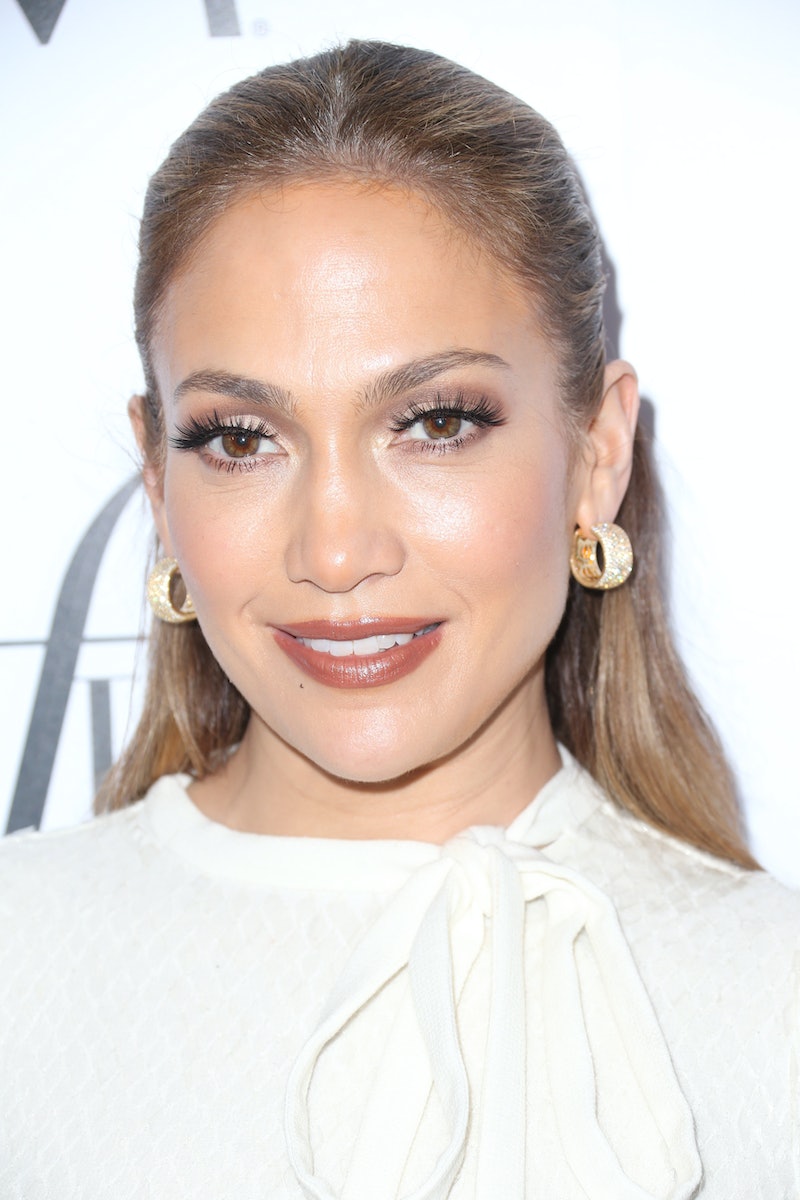 While fans were delighted to see Jennifer Lopez in the latest version of Carpool Karaoke on The Late Late Show With James Corden, one massive question remains: Who has proposed to Jennifer Lopez?! In the video, which is more than 13 minutes of hilarious, sassy goodness, host Corden asks Lopez about the most romantic thing that someone has ever done to her or vice versa, and Lopez says she's "had some amazing proposals." She quips, "You know, I've been married a couple times, I'm still trying to get it right!" Then she drops this bombshell: "I don't want to compare one [proposal] to another, They were all pretty spectacular ... Then there were some that asked me to marry them, but I said no," revealing that she's been proposed to five times. Update: Jennifer Lopez shared with Access Hollywood that she has actually been engaged six times.

Earlier: What the what, J. Lo?! Corden is equally surprised by this admission, and asks how one would say "no" to a marriage proposal. Lopez says, "You just say no... You're just like, 'No, this isn't right.'" Of course, Lopez has famously been married three times (to Marc Anthony, Cris Judd, and Ojani Noa) and engaged to fellow actor Ben Affleck, so the question remains: Whose proposals did Lopez turn down? (And who, of the people she's married, didn't propose?) I've got some theories.

Lopez has been in a long-term on-and-off relationship with Smart, but has famously not tied the knot with him, something that tabloids are constantly speculating about. According to the Daily Mail, Lopez "first started dating Casper in October 2011, shortly after her split from [ex-husband Marc] Anthony; they temporarily ended their relationship in June 2014, but then reconciled just months later." The article insists that Lopez isn't "serious" about Smart, considering him a "plaything" even though they've been linked to each other for nearly five years. I'm not sure how true that is, since it's purely tabloid speculation, but other reports insist that Smart has tried to propose to Lopez. Life & Style reported that Smart has proposed "at least five times" in 2015 alone, quoting an anonymous source who said, "Jen finally snapped at Casper by ordering him to stop proposing because she’s sick and tired of saying no. He’s probably asked her at least five times this year alone!" Take this all with a grain of salt, y'all.

Back in the late '90s, there was no power couple sexier than Puff Daddy and Lopez — their appearance (green Versace dress and all) at the 2000 Grammys is the stuff of pop culture legends — but Lopez has admitted that their relationship was tumultuous before their split in February 2001. They were never publicly engaged, but I could totally see Diddy, with his over-the-top persona, pulling out all the stops for a passionate, elaborate proposal to his lady. The world may never know.

We don't know much about Lopez's ex-boyfriend Cruz, but they reportedly dated for 10 years, starting when J. Lo was just 15 years old (!!). According to The Mirror , "they moved from New York to Los Angeles when she got her first job as a backing dancer in the show In Living Color." It's entirely possible she declined a marriage proposal from him — a 10-year relationship is nothing to sneeze at!

Lopez admitted to Corden that she'd turned down two marriage proposals, and has been proposed to five times. Lopez has been married three times, to Noa for about a year in 1997, then to Judd from 2001-2003, then Anthony from 2004-2014. She was also engaged to Affleck in a whirlwind, high-profile romance that resulted in the birth of the Bennifer era. That equals four engagements she said yes to... right? Well, it's entirely possible one of her ex-husbands didn't propose to her. It happens! In fact, my dad never proposed to my mom, and I think she's still not over it, even though they've been happily married for almost 30 years!

It's also possible that J. Lo miscounted in the heat of the moment with Corden. We may never have an answer about the declined proposals in question, but either way, it sounds like she's had some seriously enviable romantic moments in her time, and I love it.