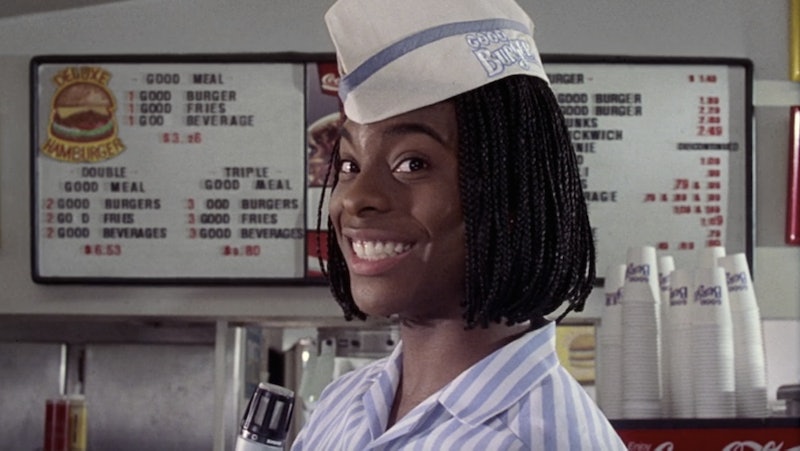 As the perpetual favorite of all the All That sketches, Good Burger became a film in 1997, and kids everywhere were eager to add that orange VHS to their home video collection. Sure enough, a huge bout of generational excitement occurred when it was announced Good Burger is now on Netflix, so brace yourself for this tsunami of nostalgia. Yet at long last I decided to succumb to the nostalgia wave, only to find out that Good Burger is still an amazing and ridiculous movie.

Not that you would expect anything less, but let's retread the plot for a moment. High School student Dexter is forced to get a job at Good Burger to pay off a car accident that's incidentally caused by Ed, the restaurant's brain dead cashier. The arrival of rival restaurant Mondo Burger threatens to put everyone out of a job, until Ed conjures some special sauce to save the day. Once it's exposed that Mondo Burger is illegally supersizing their foodstuff, Ed and Dexter join forces to expose their evil ways. We also find out who's a dude (we're all dudes).

Throw in some bizarre cameos, some plastic-y late '90s fashion, and a red carpet opening for a fast food chain, and you have one baffling movie. So sit back and enjoy all the chronologically documented silly things from Good Burger.

Never mind the fact that they're basically trying to seduce Ed.

3. Ed's Entire Bedroom Aesthetic Is Food-Themed And In Primary Colors

This feels so right.

4. Where Are The Reparations For This Little Girl?

Forget all the road burn. Imagine the therapy bills that'll need to be paid off as she copes with her PTSD?

5. The Good Burger Staff Has Ample Amounts Of Time To Powwow And Talk About How The Business Might Fail

Which... may explain in part why their business is failing.

6. Everything Sinbad Is Wearing Here, OMG

But the car is kinda like "whatever," you know?

8. Really Nice Of Zack Morris To Lend Sinbad His Phone

I'm sure you could kill a man with the weight of that thing.

9. Me, Trying To Get My Life Together

Yes, I own an all-vinyl space suit.

10. This Breaks Every Health Code That I Know

And probably some that I don't.

11. Is Dexter Just Trying To Drown His Miseries In Milkshakes?

Also, does this place just not have free refills? Because that's a waste of a lot of cups.

Putting that Journalism and Media Studies degree to good use.

13. Again, Everything Sinbad Is Wearing

I'm curious about where he procured some red leopards to make that robe.

14. But Really, How Dope Is This Mondo Burger Grand Opening?

For a minute, I thought that Smash Mouth was going to show up and start playing, because this honestly wouldn't be a late '90s children's movie without them.

You can hear the ocean better in the right one.

16. The Fact That Ed Has An Order Of Grapes Here

Somehow, it's more daunting than that fact that he brings his own sauce to work.

Although, all things considered, wasn't he making cameos in like, all of these movies? Like a Smash Mouth amount of cameos?

Lipliner was also done... and lots of it.

Like, she was engaged to Kevin Federline before the whole Britney Spears thing, they had children together, and it was the biggest scandal of 2004. Now, he's Kevin Federline, and she got to be in Good Burger. She won.

20. This Random Dog Is The Catalyst For Mondo Burger's Downfall Because He Senses The Evil In Their Meat

21. The Amount Of Commitment These Two Put Into Crossdressing

22. This Is Clearly A High-End Mental Institution

You have George Clinton of Parliament-Funkadelic fame...

... and Linda Cardellini with several birds in her hair.

23. Anyway, Then They All Dance In Unison

I mean, what else happens at the asylum, you know?

It's safe to say that Good Burger is silliness at it's finest, and I encourage all of you to take another bite of this '90s classic. You won't be disappointed.