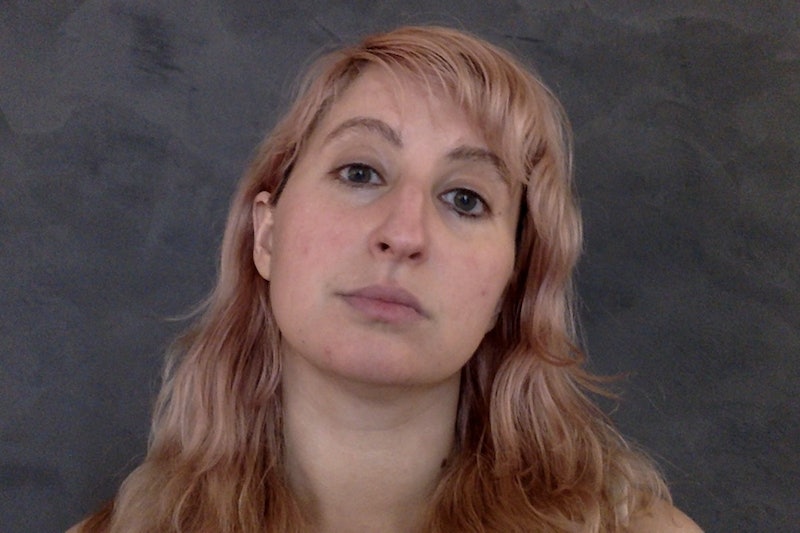 I found out that frontrunner Republican presidential candidate Donald Trump said that women who seek out illegal abortions should undergo "some form of punishment" the way I find out most things about Trump — a friend sent me a text that said, "OMFG DID YOU HEAR WHAT TRUMP JUST SAID?" Outraged texts from friends are my number one source for Trump info these days because, honestly, though I will do everything in my power to make sure that Trump doesn't become president, I don't much care about what he has to say. I grew up near New York City in the '80s, and in my mind, Trump remains our local Mr. Burns-style ridiculous heartless billionaire. I mean, do you remember when this guy appeared at a WWE wrestling match and proceeded to bodyslam and then shave bald WWE CEO Vince McMahon? Do you remember when he was in Home Alone 2 ? Do you remember when he was in that McDonald's ad? I hate him, I fear him, but I don't think I have any duty to keep up with whoever he has decided to figuratively bodyslam and shave today.

But last night — when, in conversation with MSNBC's Chris Matthews, Trump said that if abortion were made illegal, women who had abortions should be punished — I paid attention. I became even more intrigued when Trump's camp walked the comments back a few hours later, "clarifying" that Trump had meant he would actually punish doctors, and that "the doctor or any other person performing this illegal act upon a woman would be held legally responsible, not the woman" and that "the woman is a victim in this case, as is the life in her womb." Because Trump's initial comment? The one about how he thinks women who seek illegal abortions should be punished? That was the most honest thing I have ever heard an anti-abortion politician say. Because if you really, truly believe that abortion is murder, then you believe that the women who have them are murderers.

Like one in three American women, I have had an abortion. I had a medical abortion — aka took "the abortion pill" — in 2006, and contrary to what any anti-abortion activist might tell you, it was not a day at the spa. It was hours of sweating, bleeding, and cramping alone in my apartment, which was, you'll be shocked to hear, really unpleasant and something of a punishment in and of itself. But it was what I was willing to endure in order to not have a child — then, or ever. I have no plans of ever becoming a parent because I'm neither emotionally nor financially stable, and I just don't think I have the right temperament for it. The kindest thing I could do for any theoretical child of mine was prevent it from being born to me. And no, I haven't regretted my decision to have an abortion or forgo parenthood for a minute.

In the decade since I had an abortion, every time abortion rights come under attack — which is often; in 2013 alone, 22 states enacted 70 new provisions to restrict abortion access — I ask myself: would I still get an abortion if I got pregnant, even in the face of all the added restrictions? Would I drive 20 hours, or risk losing my job, or even undergo a risky or illegal procedure if abortion was outlawed? And the answer is always: yes. If I became accidentally pregnant again, I would do absolutely anything to get an abortion.

And if a woman thinks abortion is the right thing to do — or even the wrong thing to do but a thing she must do anyway — she will drive 12 hours or take out unfair loans or beg strangers for money or crawl through broken glass or do anything else she can to get one.

I shouldn't have to feel this way — I mean, I shouldn't have to be willing to basically crawl through broken glass just to assert my right to bodily autonomy. But I do have to be willing. And so do many, many other women. Why, just this weekend, a casual conversation I had with two women while waiting on a line at a restaurant somehow turned into a discussion about how one of them had driven for an entire day during her senior year in high school, in order to end a pregnancy that would have kept her from attending college and eventually becoming a doctor herself. "I want to tell people who complain when I refer them to a specialist across town: hey, I drove 12 hours to get an abortion! Deal with it!," she told me.

We laughed — not because abortion restrictions are hi-larious, but because it spoke to a truth that most women know, that Trump's comments spoke to, and that most anti-abortion theory would have you believe is false: that abortions are something that women choose to do, not something that is just done to them. When a woman has an abortion, she is the actor. She has made the decision to have abortion. And if she thinks it is the right thing to do — or even the wrong thing to do but a thing she must do anyway — she will drive 12 hours or take out unfair loans or beg strangers for money or crawl through broken glass or do anything else she can to get one.

Which is why I have always found it offensively disingenuous when anti-abortion activists, when dreaming aloud about a brave new world where no one is allowed to ever make any choices that they don't agree with, talk about punishing abortion providers, rather than the women who have them. In this scenario, women aren't actors in their own destiny; they haven't made a choice. This line of thinking basically says that abortion providers play a role somewhere between negligent car manufacturers and cult leaders, clouding your mind and tricking you into making a bad call.

I am offended and incensed by the idea of banning abortion, and I am offended and incensed by the restrictions that force women to listen to medically inaccurate lies about abortion, or cause them to put their families and livelihoods in danger by making them travel impossible distances in order to get an abortion. But I am also offended and incensed by rhetoric that paints women out of the picture and pretends that we don't make our own choices when we have abortions. I made a choice. I'm not a naive child or an innocent corrupted by a wayward doctor. I am a woman who made the bad decision to have unsafe sex, and ended up with a pregnancy I didn't want. I don't believe in hell, but if you think that's where people who have abortions go, I'll be there. And if you think people who make abortions happen should be punished, you should punish me, because I sure as hell made mine happen.

I fought my way into that clinic — begged for money, took time off from work that I couldn't afford, dealt with the entire situation alone. I did everything in my power to get that abortion, because I knew the rest of my life depended on it.

And that's why I appreciated Trump's comments, as divorced from all human empathy as they were. In private, many anti-abortion activists will tell you that if you have an abortion, you're a murderer and you're going to hell. But the mainstream political arm of the anti-abortion movement acts as if it is totally divorced from this kind of thinking — witness their horrified reaction to Trump's initial comments, like Ted Cruz's “Of course we shouldn’t be talking about punishing women; we should affirm their dignity and the incredible gift they have to bring life into the world.” Well, I've been yelled at outside of an abortion clinic before, and let me tell you something: no one was screaming "You are very dignified!" at me.

My personal belief is that many people who espouse hardline anti-abortion rhetoric and long to make abortion illegal already think this, frankly; they just feel that they can sway people who are moderate or undecided on the issue if they claim to not be interested in punishing the women who made this choice, but rather the abortion care providers who are treated as the "puppet masters" in this scenario.

But they're not. I wasn't tricked into having an abortion, OK? No one lured me into a clinic with the promise of candy and a new puppy. I fought my way into that clinic — begged for money, took time off from work that I couldn't afford, dealt with the entire situation alone. I did everything in my power to get that abortion, because I knew the rest of my life depended on it. So if you think abortion should be a crime, you'd better be able to look me in the face and tell me I'm a criminal.