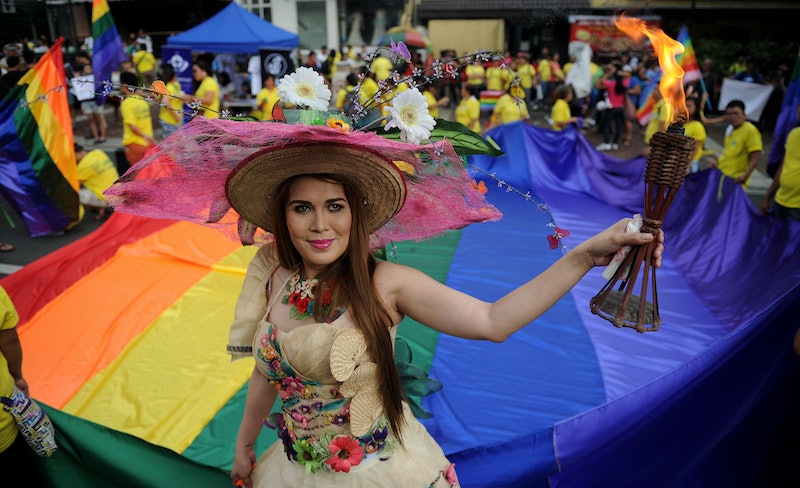 As a lesbian myself, I often think about straight privilege — and not just the larger examples of it, but also the smaller, yet no less impactful, everyday examples of straight privilege. That's not to say that every time I interact with a straight person, I count all the advantages they generally have over me, but that I try to remain politically conscious and informed about my place in the world as part of a minority group. In my opinion, we've made a lot of amazing progress in terms of LGBTQ rights in the past decade; however, there have been a lot of setbacks along the way, too. A lot of people in the LGBTQ community are still struggling, particularly the transgender community and those who face intersectional struggles with race, socioeconomic class, and etc.

Personally, I love having straight allies. Allies are a hugely important help to our community and are a vital resource. However, I do think it can be easy for allies to forget the daily struggles LGBTQ face outside of the "hot button" topics like same-sex marraige, adoption rights, bathroom access, and so on. While of course those big issues matter hugely, there's also the day-to-day life of LGBTQ people, and the subtle homophobia (and biphobia, transphobia, queerphobia, and more) we face on a regular basis. Our society and culture tends to focus primarily on a heterosexual, cisgender, white narrative, so it's easy for people to forget that from the time we're kids, LGBTQ people are painted as the "other" (and sometimes, much worse than that).

With that in mind, the following list of straight privilege examples is not meant to attack anyone or make judgments, but as a gentle reminder of how privilege can manifest, even in the smallest of ways.

1. Not Having To Justify Or Prove Your Identity

When babies are born, people automatically start assigning them gender norms. While gender norms involve ideas about beauty, physical appearance, likes and dislikes, and so forth, they also involve an assumption of gender identity and sexual orientation. From the time we're literally infants, LGBTQ people are shoehorned into a narrative that, for one reason or another, doesn't fit the way we actually see ourselves in the world. When it's time to "come out," many people (even those with good intentions!) ask LGBTQ people about how they were "before" and compare them to how they are now — for example, asking about the "boyfriend" they had in the second grade, didn't they have a crush on Justin Timberlake when we were thirteen, and so on. When it comes to heterosexual attraction, no one questions the validity of attraction or feelings between you and your significant other, but for LGBTQ people, others frequently demand an "explanation" for where your orientation stems from and how "real" it is.

2. Not Having To Fear Hate Crimes Because Of Your Orientation

Starting from the time LGBTQ people are in school, we're often bullied and harassed because of our sexual orientation and/or gender identities. LGBTQ youth have higher rates of suicide and depression and anxiety than our straight counterparts, likely because we're often in situations where we feel judged, unwanted, or abnormal for reasons we can't control. Even later in life, LGBTQ people are at risk for hate crimes because of our orientations and identities. While all people may be at a risk of violence for various reasons based on each individual's circumstances, LGBTQ people have an additional layer of fear simply for being LGBTQ.

3. Not Worrying About Losing Friends, Family, Or Community Because Of Your Identity

For a lot of people, one of the greatest fears in coming out is that you'll lose your friends, family, and loved ones. Tied to losing this support is often access to safe housing, health insurance, and financial security. This can be terrifying to face no matter your age or situation in life, but can be especially damaging for LGBTQ youth, who make up a high percentage of young people who are homeless. It can also be a scary factor to consider for people who come out later in life, and may be leaving a marriage or long-term relationship where their partner may maintain control over their finances, home, or children.

4. No Risk Of Losing Your Job Because Of Your Identity

In 22 states in the country, you can still be fired for being gay. Yes, even though same-sex marriage is recognized nationwide, in almost hald the country, you can be married in the morning and terminated in the evening because of your sexual orientation. It seems crazy, but it's a real fear that many LGBTQ identified people have to live with every single day. For many LGBTQ people, going to work can feel like living a double life, as there is often a reluctance to be open about sexual orientation, who your partner is, where you two live, etc if you're worried someone is going to out you. If you're straight (or if you're in a straight-perceived relationship) you still may not talk about your personal life at work (which is totally OK), but if you do so, you (likely) won't be terminated for it.

5. Not Having To Prove Your Identify Through Appearance

While heterosexual people definitely can feel societal pressures and unfair expectations that have to do with body image and appearance, LGBTQ people are often judged by their appearance on a whole different level. Stereotypes in the media perpetuate ideas about what gay people look like — for example, that all lesbians are butch, all gay men are effeminate, etc. These stereotypes and expectations are damaging because, for many people, fitting into those molds can feel like a performance. It's also another layer of the pressure LGBTQ feel to "prove" their identity and appear valid to others.