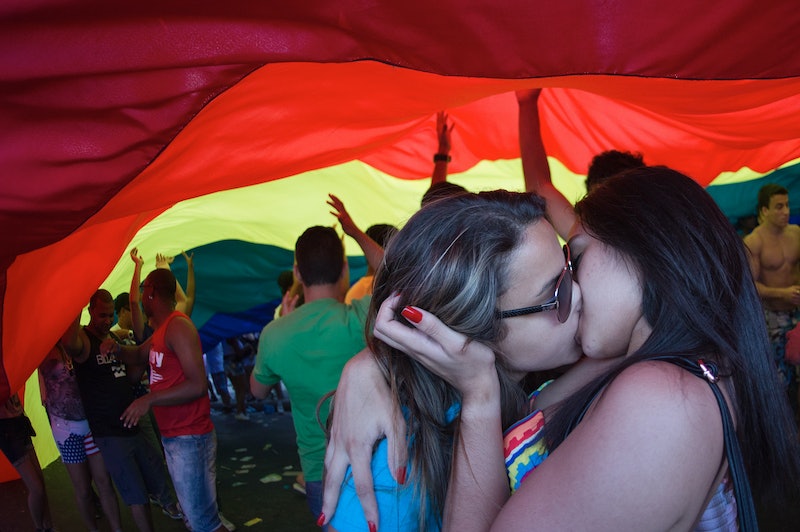 As an LGBTQ person myself, I'm strongly of the belief that LGBTQ safe spaces are necessary. "Safe spaces" can be anything from a GSA on a college campus to a themed queer night at a local bookstore. The concept is that it's a safe environment for people anywhere on the LGBTQ spectrum to gather, socialize, and connect, without worrying about blatant hate or even microaggressions. Often, the LGBTQ community is associated with having our own spaces — gay bars, gay pride events, and gay bookstores, for example. While these spaces are generally open to everyone, including heterosexual and cisgender people, they are primarily understood as spaces where queer people can be queer — by which I mean be out as ourselves, with our partners, or out as single and queer, looking to meet new friends, find community, or even hook up.

What people don't always remember about these "special" spaces is that they're born largely from necessity: Especially in a pre-SCOTUS world, queer people were particularly marginalized and had few opportunities to safely come "out," to meet one another, and to connect. Even with recent progressive legal strides in the United States, there are still many people who live in the closet for fear of social repercussions or losing their employment or home. My point is that queer people, as a whole, still need and value these queer spaces and when non-LGBTQ people enter them, it can feel isolating and frightening.

But safe queer spaces may no longer be as safe as they once seemed. A recent example of this phenomenon: Straight people are using Grindr, but probably not for the reason you think. If you aren't familiar with Grindr, it's a hook-up app designed for guys who are into guys. As a queer person myself, when I first heard about heterosexual people using an app like Grindr, I assumed they were people who were questioning their sexuality (which is totally fine!). I was surprised to learn, however, that many people who are not questioning their sexuality are still hitting up people on Grindr. How come? Apparently, straight people are using Grindr to make friends.

So, what exactly is the problem with straight people using Grindr in this way? It's only a hook-up app, right? While this certainly isn't the injustice of our time, it symbolizes a greater issue: Basically, it's a way for straight people to co-opt the LGBTQ community, even if they aren't intending to do so. What many heterosexual and cisgender people forget is that they (generally) have ample places to safely socialize, meet one another, and feel comfortable expressing their true selves. For LGBTQ people, our circles are very, very limited, so when our spaces are infiltrated, it can feel like our identities are being removed.

I'll preface this point with saying that certainly not all straight or cisgender people behave this way. Unfortunately, though, it can become really uncomfortable when straight people come to gay bars. There are horror stories of straight women holding bachelorette parties in gay bars, for example, and using transphobic slurs and inappropriately touching queer men; similarly, some straight men treat lesbian bars as curiosities or entertainment.(You only have to read Yelp reviews of lesbian bars written by straight men to see this one in action.)

As a personal example, my partner and I once went to a lesbian bar in a neighborhood of NYC known for being particularly gay-friendly. At some point during the night, a group of seven or eight straight men showed up. They drank at the bar and sat outwards, staring into the dance floor at a gathering of (mostly) queer women, and just... stared. Unsurprisingly, many women left, including myself and my partner. Am I calling for spaces that are "queer only?" No way. But was that encounter uncomfortable and unnerving? Absolutely. It felt like we were being put on a display, and our notion of safety in the space was definitely violated by their presence and obtrusive staring. In truth, I think it comes down to the fact that as queer people, we're often stared at, asked inappropriate questions, and commented on by non-queer people in the general public. When we're in designated queer spaces, this is the last sort of thing we want to deal with.

2. We Don't Want To Fulfill Your Stereotype

While I think this certainly happens live and in person, I've learned it also happens on dating apps. There are a number of straight women who use Grindr to meet gay BFFs. Of course, the "gay BFF" stereotype is one we're probably all familiar with: Someone to go shopping with, to commiserate about boyfriends with, etc. The problem is that this stereotype is a caricature based on how we as a society understand effeminate gay men — not an accurate representation of gay men, either of those who identify as or present more on the feminine side of the scale or those who don't. While some queer guys might be OK with making friends with women on dating apps, it appears many are not. For example, a 20-year-old gay man told Mic on the subject, "It pisses me off. I'm trying to get my d*ck sucked, not go shopping with you."

While this is a little more blunt than I'd put it myself, I think it hits at the core of this particular issue: Queer people are indeed sexual beings, and it can feel frustrating to have straight people invade our spaces because they want to "make friends" or "because they love hanging out with gay people." In fact, LGBTQ people often meet potential partners only on dating apps or in designated queer spaces, so when straight people enter (even if they have good intentions) it can feel like a hinderance and disrespectful instead of friendly. The frustration doesn't come because LGBTQ people hate straight people; it's because we want some space in the world to fully embrace being our queer selves.

As a queer person myself, I've actually made a number of friends in gay bars. LGBTQ people often go to gay bars and clubs to meet others to date or hook-up with, of course, but we often also go to make friends and get involved with our community. Even with progressive legislature on the rise, it can still be really intimidating (if not dangerous) to be openly "out" in many parts of the country, but this doesn't necessarily make us want LGBTQ brothers and sisters any less. In fact, solidarity with other LGBTQ people can be a really powerful, important aspect of one's life, as it can provide incredible emotional support, networking, and just plain friendship.

For example, at a gay bar once, I met a gay couple who ended up talking quite openly to me about their struggles with one of their mother's disowning them around the holidays. I had a similar experience, and we bonded over it. Now, if a straight person had been nearby and overheard this conversation, it certainly didn't end my world. However, would I have felt as comfortable engaging in such a personal dialogue if there had been a bachelorette party for straight women happening next to our table? Probably not. Once the veil of safety is broken, it can be hard to open up, even to those you connect with.

In short, I certainly have brought a straight friend or two to gay bars or queer poetry nights with me. And I think that's OK! I think it's certainly OK when other LGBTQ people do that, too; after all, education and awareness are important aspects of gaining acceptance, and including people in our community is a great approach. However, I think the invitation is key: For straight women using Grindr, or straight men wandering into lesbian bars, it can feel like a violation of space and safety for the LGBTQ people who are trying to enjoy their privacy and freedom in those limited arenas. And if you are invited to a designed "queer space," have fun! But please remember to be respectful — we're all nuanced, complex people, not stereotypes, and we're all just trying to find a space to relax and be ourselves.