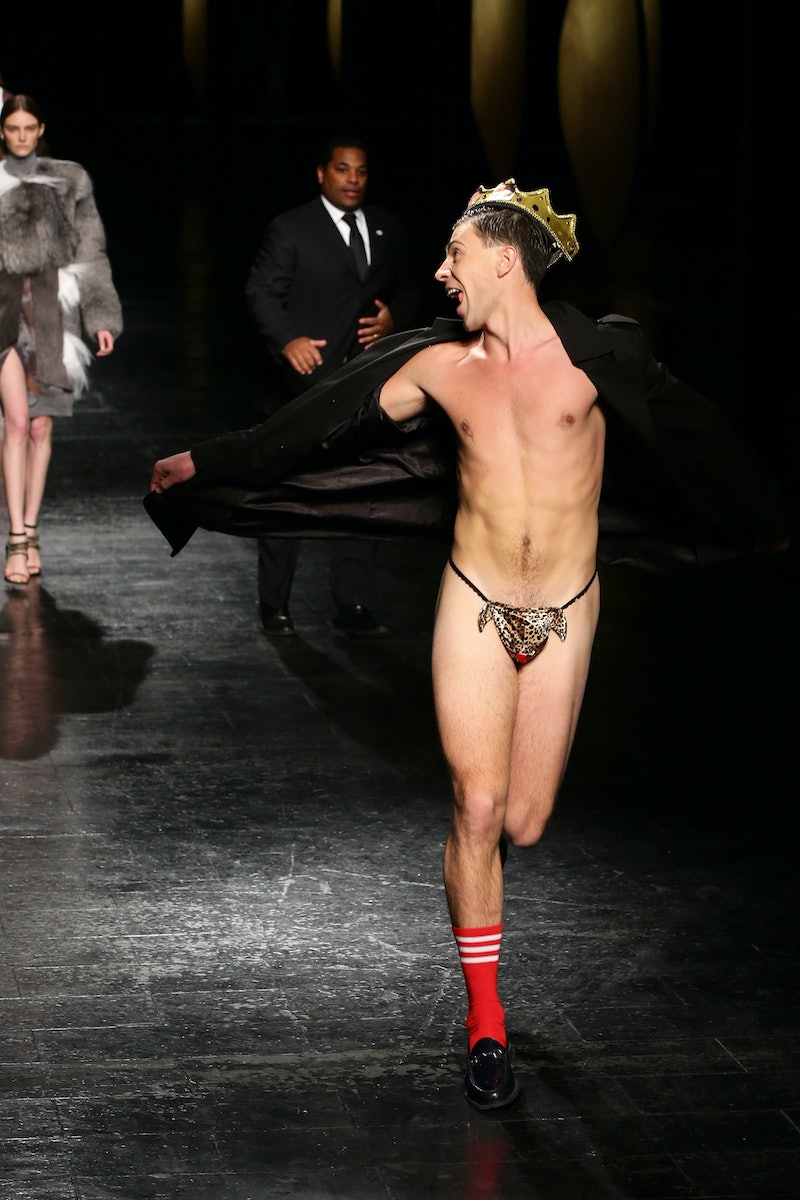 On Saturday, Prabal Gurung's Fall 2014 show was proceeding as normal — that is, luscious layers, beautiful shades of orange, and Mongolian lamb coats — when an actor/prankster/surprise Leonardo DiCaprio hugger named Vitalii Sediuk ran onto the runway like a streak of greased lightening, clad in your average fashion week outfit: tube socks, trench coat, crown, and a leopard-print g-string.

Sure, on some level, streaking will always be a little bit hilarious. And it's hard to look at Sediuk's expression of sheer glee without cracking a smile (link NSFW). But the fashion world is quickly growing tired of this sort of childish stunt, especially when it interrupts a show as beautifully curated as this one. As Fashionista reports,

...those seated at Gurung’s otherwise serene show were, for the most part, unamused. There were gasps and cries about how rude and unfortunate the stunt was.

After all, it's not like these fashion week insiders are newbies to streaking. They've seen it all before and then some: last fall, Paris Fashion Week was stormed by two topless feminists protesting something unclear about models (link NSFW). A Dolce & Gabbana show was streaked last spring by a dude in birthday suit + ASICS sneakers. Two years ago, another lady streaker hit up Lincoln Center as a publicity stunt for an improv show. Streaking during fashion shows has become, bizarrely enough, a thing — so no one is terribly surprised when the calm stride of models is interrupted by shrieking, nudity, and a disgruntled security guard stampeding down the runway. But no one is doubled over with laughter, either.

While it'll always be amusingly ironic to see a naked person in an event that's all about clothing, it's just not clever anymore, whether the streaking is done in protest, in promotion, or all in the name of good old-fashioned naked fun. If anything, it's become a meme. And as we can see from the fake Prabal Gurung streaker's depressing, fame-mongering Twitter account — which boasts a grand total of 62 followers — we're all just sort of over it.

RELATED ON BUSTLE: Other WTF Moments from Past Fashion Weeks