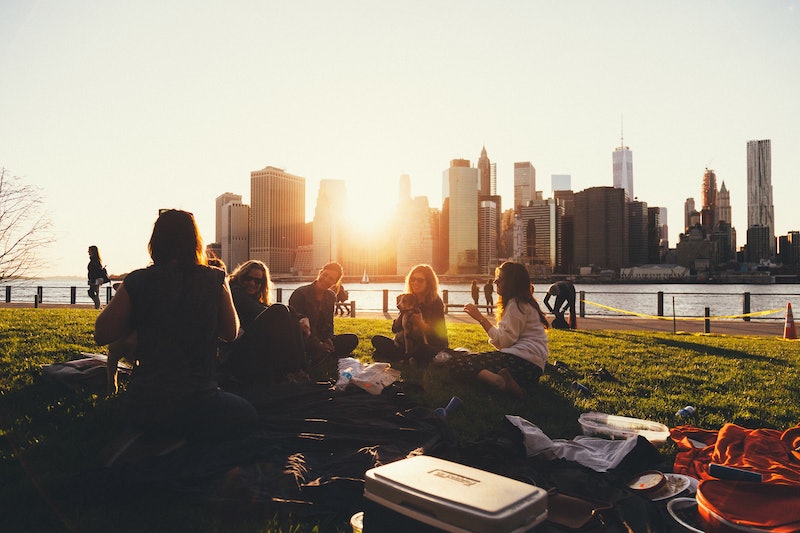 I have lived in New York City my entire life, and people frequently ask me, “Don’t you ever want to leave and try living somewhere else?”

New York is part of my identity now, and if you take me out of the city, where will I get a bacon, egg, and cheese at 2 a.m.? While I know parts of the city like the back of my hand, it still has the capacity to surprise and delight me. Every day can be an adventure if you want it to be — there are so many neighborhoods to explore, new things to do, and places to eat. But I understand that city-living isn’t for everyone. This town can break you down, test your faith in humanity, and make you feel like you’re one hot smelly subway car away from officially losing your mind.

Every city has a frenetic energy and character all its own. If you’re expecting to stay in your cozy little bubble cut off from the world, good luck. Yes, cities are loud — as a kid I fell asleep to the soothing sound of sirens blaring, car stereo bass thumping, and tipsy tourists shouting outside my window as they stumbled back to their hotel. As an adult, I still have trouble dozing off without a little background noise (and crickets don't count).

Many complain that life in a city is dirty, mean, and nature-deprived. Yes trees grow out of tiny sections of dirt on a sidewalk or in a park, but in a city you can walk, ride a bike, or take public transit, instead of driving a car. So, technically, city-dwellers are helping the environment! We are the ultimate nature-lovers!

So how do you know if you belong in a metropolis or should high-tail it to the countryside? Being a city person is not about time spent hoofing the pavement, acting like a character in a Woody Allen movie, or an obsession with hand-rolled bagels. Scroll through these deciding factors and see if you are indeed a cosmopolitan city-dweller at heart:

1. You Get Lonely When Not Surrounded By People

Of course, everyone needs a little peace and quiet now and again, city people included. But every time you leave your apartment for anything more than a vacation, you start to miss the thrum of the crowd. Nature is beautiful — and waking up to bird calls and morning dew glinting of the grass is great... for a few days. A true city person deprived of the buzz would go stir crazy, no matter how idyllic the scenery.

2. You Do Not Have A Current Driver's License

Whether you never bothered to learn to drive or allowed your license to expire the second you moved, you are one step closer to being a true city person. With all the great public transit options, you don't see the point of having a car. Plus, being sans license means you get to be chauffeured around anytime you leave the city. And there's a pretty sick view from the passenger's side.

3. You Can Tolerate Small Spaces

Whether it is a tiny apartment or a crowded subway car, you accept that dealing with a small amount personal space is part of the deal. Cities cannot offer wide open expanses and great big skies, but what they have to give in terms of opportunities is unmatched. As a city person, you'd happily trade a few extra square feet in your apartment to be that much closer to making your dreams possible.

4. You Were Filming Rats In The Subway Before It Was Cool

Pizza Rat may have taken the world by storm, but that was certainly not the first time you had seen a rat pull a piece of pizza double its size down the stairs. You are familiar with all the major players in the city's wildlife game whether they be squirrels, rats, roaches, or pigeons. Just like the human residents, these animals do a lot of crazy things to make it in the city and get their "slice of the pie."

The pedestrian always has the right of way, so you view crosswalks as more of a suggestion than a rule. You have places to go and people to see — so as you speed walk through the streets, you just make sure you look both ways before crossing them.

6. You Always Have A Book Or Headphones For When You Want To Ignore People

You know the value of shutting out your surroundings when you're not interested in talking to strangers or listening to people rant on the subway. If someone is standing on the street with a clipboard, all you need to do is pop in your earphones and you can float down the sidewalk unperturbed.

7. You Accept That Coffee Is Just Real Expensive Now

It's unfortunate, but grabbing a cup of joe from your neighborhood cafe isn't cheap anymore. That delicious caffeinated brew is just one of the many things that goes up in cost when living in a city — just like rent and alcohol. But luckily, instead of griping about it, you have taken the time to search out the good deals, and how to pinch pennies so you can splurge when the time comes!

8. You Have Biked On The Mean Streets And Never Felt More Alive

It's hard not to be terrified in the face of getting "doored" by a car or thrown by a pothole — but you strap on that helmet anyway. Biking may not be the safest, but it is a fast and economical way to get around a city. Plus, you know you look super cool with one leg of your pants rolled up.

9. You Are A Public Transit Wizard

You know the map of the city pretty much by heart, and can list the train stops off to tourists with incredible accuracy. When you get a seat during rush hour you know that it is a special and sacred thing. You may have even gotten a little superstitious and developed a ritual so that the trains run on-time and without problems when you really need to get to your destination fast. But no matter how crowded or crazy the public transit gets, you would always prefer it to being stuck driving a car in traffic. Gross.

10. You Love Having All The Culture At Your Fingertips

You love having the best museums, theater, music, and food available to you any night of the week. While you may rarely find the time to take advantage of it, when you do, you feel lucky to live in such a cool city.

11. Most Of Your Money Goes To Rent, And That's OK

You know you're a city person when you start to think of that bank account gut-punch every first of the month as a normal thing. Your apartment maybe tiny and expensive, but having the rest of the city as your playground makes it all worth it.

12. You Basically Live On Seamless

Stove? You mean that extra storage space, right? You don't remember when you last used it, because the take-out options in your 'hood are ridic. Even better — that's another night off from doing dishes!

13. You Have An Evolving Relationship With Your City

You and the city don’t always get along, and your relationship has been pretty rocky at times. The city can get on your nerves, treat you badly, and make you want to leave for good — but just when you think you're ready to cut ties, something wonderful happens. Every time you and the city make up, the relationship becomes stronger than ever.

The first couple times it was cool, but now you see a celeb like every day. It would take something truly spectacular for you to stop and stare (like, Ryan Gosling on a unicycle giving out free smoothies — but that's just a dream I had sadly).

'Cause you never know where the night will take you.

16. You Gripe About The Tourists

Even though tourists can be a pain, you will always give them good directions if asked and even take time to recommend fun activities and places for them to go. You want them to love the city as much as you do! And while they may clog the sidewalks as you are trying to get to work, you feel like you have a responsibility to be a good ambassador.

17. Dating Is Tough But Fun

So many options and yet so little time! Thank heavens bars are open late.

All black doesn't only look sophisticated and cool, but it is basically the uniform of the city (even in the summer). You know you're a true city person when you open your closet and see mostly that one color staring back at you.

19. You Wholeheartedly Believe Your City Is The Best Place On Earth

You've lived in a few places, and know that your city has no equal. Every time you travel to see friends, you always try to convince them to move to your town. You know that they would love it, just like you do — and the more the merrier!