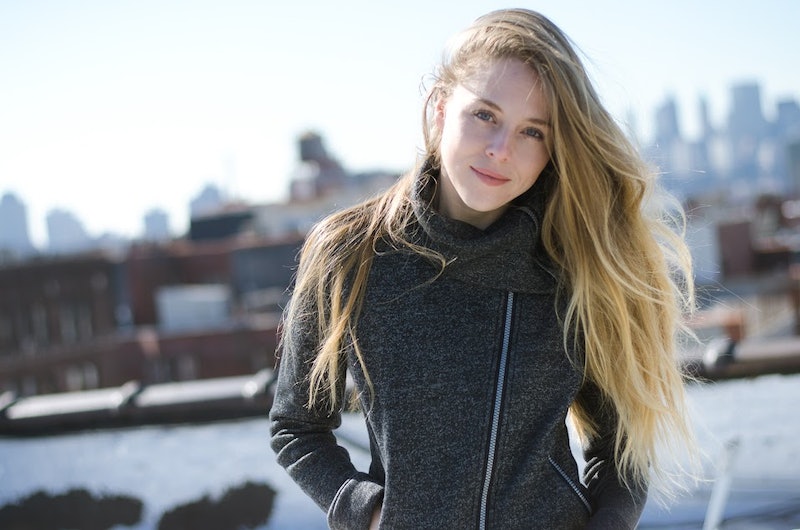 Because in film, on your TV, on the radio, in the paper, New York City is a magical diorama of the entire universe. Every failure you have will be meaningful and every victory will push you up a step on the stairway to heaven. For every emotion and experience, there will be a piece of art to pull from the New York reference library that will make you feel momentarily at peace with your address. Consider that New York is a popular subject for artists because New York is one of the greatest emotional and physical catalysts there is. Forget outer space — you only have to ride to the top of a high rise to experience the overview effect. Look down at the intricate patchwork quilt of building blocks and street seams and feel your perspective shift, feel your body grow slight and your mind grow quiet.

New York is a living, breathing, entity, a mass of ever-evolving cells whose construction outshines its destruction and thus is always new. Every generation that moves into NYC goes through three stages: misplaced, one with the city, and displaced. Most people who move to New York City — be it intellect-hungry freshman, ambition-starved career-folk or young, almost-professionals — move to the city to become something greater than it. But in those first few weeks of New York City residency, the puff of your chest and the tip of your nose will lower. You will cower in the shadow of the city. But there will be no time to sit around and rethink the big city once these early trepidations start to poke you between the ribs. Your rent will be due and your job will require your attendance. And so, though you might still smell like the fresh corn from your back country home or oil from your industrial pizazz-less city, you will be a New Yorker, the second you sign a lease. Here are all the ways it will slowly start to change you from then on out:

You Will Come To Terms With Fantasy Vs. Reality

Most people will move to the wrong neighborhood, first. New New Yorkers will move to a neighborhood that a friend suggested or a movie advertised, and almost always you’ll end up outside of it because realtors lie and you won’t know better. You’ll get to know the habits of your neighbors and it won’t be like Friends or Seinfeld. You’ll try to make friends with your bodega owner but they won’t remember you. You will start to realize that New York on film is not the same New York in front of you.

You Will Feel Alone

You’ll be late to work because someone died on your train and you will be shocked by your boss’s lack of empathy. You will give tourism a try and visit the Guggenheim and you won’t fit in there either. You’ll be stuck between the tourists who take pictures of things like H&M awnings and pigeons and the seasoned artsy fartsy crowd who is just using the spiral path to walk off their boozy brunch before SoulCycle. You will find it hard to believe that you will ever make friends, before you do.

You Will Become Chummy With The City

After a few years, you and New York will link arms and prosper. Your bodega man will have your coffee ready for you before you come in and you’ll never have to remind him no bacon, only egg and cheese because he’ll remember that you’re experimenting with vegetarianism. You’ll have a bike that you ride on in skirts and dresses and heels. You’ll find a nook in your local park that waits for you on the weekends. You'll have bartenders to high five and crossing guards to talk about the weather with and you'll have favorite spots that feel like your favorite sweaters.

You Will Rapidly Age

Your apartment will suddenly become a holy haven, a divine nest that keeps you safe from the construction that’s starting up across the street and the college graduates that moved in next door ... which you'll suddenly be annoyed by. You’ll curse their loud music late at night. You’ll get mad at them for smoking out their window which blows straight into your dinner seat. And then the construction will be over and it will be quiet for a little while but soon after, a new tribe will move into town. Your bodega will go out of business because a Sweetgreen and Starbucks will have sandwiched it and you'll be surprisingly cranky about this. Your 103-year-old neighbor who has been living below you will die and another twentysomething will move in before the walls have been repainted. They’ll hang up posters and put an ironic doormat out front and you’ll feel strangely defensive, like they’re dancing on a grave.

You Will Develop An Elsewhere Obsession

You’ll tell your friends and family that you’re moving out west, that LA really has it going on, that you want a better, more zen quality of life. You’ll start to dream and talk about fixing up a cabin out in the country where you’ll read and write and farm and live a simple life. Every day you’ll find someone else’s ear to hiss into — you can’t seem to tell enough people that New York isn’t what it used to be and that it’s going to sink into the Atlantic anyway. You believe that if you tell everyone how crappy you think New York is, they’ll all leave and you can have it to yourself, or you’ll all leave together, because if you can’t have New York, no one can! Soon you’ll have no one else left to complain to about the city. Your friends and co-workers will tell you to leave if you’re unhappy — there’s always a line around the block of people waiting to take your job and apartment.

You Will Learn How To Revive Yourself

Eventually you’ll make the decision to move to a new neighborhood and give it one more year. The rejuvenating dizziness that comes with fresh paint and that first night in your new kitchen with take-out and a friend will feel like a second chance at life. Suddenly the city will become new again. You’ll talk to a friend who moved out to LA and smile too wide when they complain to you about traffic on the 405 and how they haven’t been to the beach yet and how the subway isn’t real and the buses are not navigable and the mountains are nice but, there are rattlesnakes.

You Will Deeply Respect New York

But if you stick it out, eventually you’ll feel one with the city and then displaced and then misplaced again. Because New York isn’t changing. Its cyclical lifespan will remain constant throughout yours. The pushes and pulls are the heartbeat of the city. New York is a model of the whole world on one floating chunk of land. It belongs to no one and will live forever. And when the Atlantic swallows it whole, it will stay put, the new Atlantis. And even below you, it will still be bigger than you. You’ll never have New York, but if you’re along for the ride, New York will have you.

More like this
13 Summer Solstice Quotes To Celebrate The Longest Day Of The Year
By Sadie Trombetta
How To Change Your Instagram Bio
By Emma Carey
4 Zodiac Signs That'll Have The Luckiest July
By Brittany Beringer
On TikTok, Orange Wine Is The Varietal Of The Summer
By Madeleine Aggeler
Get Even More From Bustle — Sign Up For The Newsletter