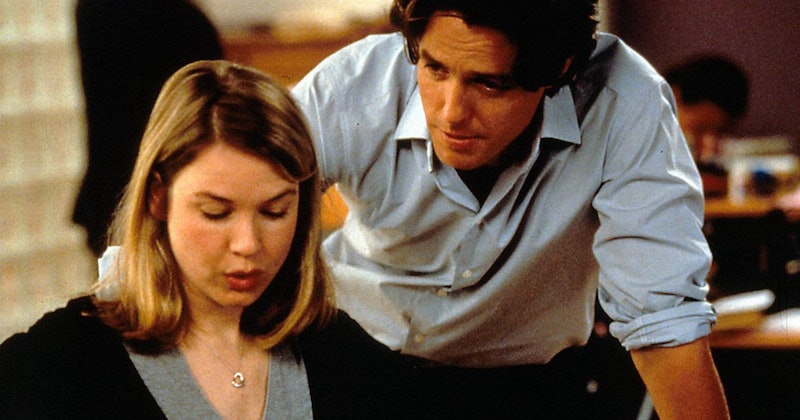 Name a romantic comedy — can you think of one? Two? Good, because I can pretty much say that I’ve seen them all. Among the Sleepless In Seattles and How To Lose A Guy In Ten Days, I have to say that Bridget Jones’ Diary is my favorite. The movie was filmed in 2001, which is around the time that all of the other great romantic comedies were, but it just feels different. It’s so much more adult and far less polished than the others, and I always loved that. Now, 15 years later, I’ve decided to watch the movie I watched too often as a teen to see how it holds up now that I’m a grownup. Well, as close to a grownup as I can possibly get. What’s Bridget Jones’ Diary like when you watch it as an adult?

For those of you who have never seen the film, Bridget Jones’ Diary is based on the novel by Helen Fielding and is a reinterpretation of Jane Austen’s Pride & Prejudice, and it basically follows around Bridget Jones, a hot mess of a 32-year-old who lives in London and is very unlucky in love. As a 28 year old living in a major city, how would my life mimic the life of Bridget Jones? Is it still applicable to a modern woman in 2016? Here’s what I found out during a rewatch.

1. The Struggle Of Being Set Up Is Still So Real

Bridget walks into that Christmas party and her mom already has an outfit laying on her bed to change into and a man to be introduced to. It’s as if all single people need their married/taken friends and family to show them the path or else they’re damned for all time.

2. The Turtlenecks In This Movie Are Hilarious

Why are there so many turtlenecks? Is this an English thing? I’ve never seen more turtlenecks in a film in my whole life than in this movie.

3. Mark Darcy’s Sweater Is Probably Being Sold In A Brooklyn Vintage Store

Some hipster is wearing it ironically/as normcore or it’s being shown off at an ugly sweater Christmas party.

4. What’s Wrong With Having A Major Relationship With A Bottle Of Wine?

Sure, it gives me a headache sometimes, but it’s always there for me and it never turns me down. Sometimes, it’s even delivered to my apartment without being asked.

5. “All By Myself” Is Still A Perfect Screaming Anthem

Also great to scream alone in your apartment/house? “We Are Never Getting Back Together” by Taylor Swift or “Since U Been Gone” by Kelly Clarkson.

I know she doesn’t make much money and London is as expensive a city as any, so I guess we can chalk this one up to movie magic. Sigh.

7. The Sexual Harassment In This Movie Is Insane

Hugh Grant’s Daniel is an abominable boss. Bridget’s workplace is the least appropriate office I’ve ever seen. I cannot imagine the lawsuits that would come out of this place.

8. Moaning Myrtle Is So Typecast

Does Shirley Henderson, who plays BFF Jude, ever leave the bathroom when she’s working? First this, then Harry Potter.

I was not of age to be in bars when people were still allowed to smoke in them, but I cannot imagine how awful it must have been. Bridget and her friends smoke like chimneys — what do their clothes smell like?

10. The Office Sexual Harassment Though

Did this movie set women back? Bridget talking to Daniel on the computer… I just can’t.

I don’t even know how Bridget managed to do this to herself… I’ve tried and I don’t have the guts to pull that little strip off.

Sure, there’s a time and place for sexy underwear, but for me, that time is never. Bridget’s comfortable underwear is more my speed. People who care what underwear you have on are paying too much attention to your underwear and not that they’re taking your underwear off.

13. Bridget Needs To Get It Together

I know the whole point of the movie is that Bridget can’t do anything right, but damn, girl, lock it down. Get your apartment cleaned, be professional at work, balance your checkbook, and figure it out. You’re 32. It's not cute after a certain point.

14. Hugh Grant Is The Guy You Think Is A Good Idea When You’re Young

Daniel is sexy and cool and kind of smart and successful, and that’s so enough to charm you when you’re young… but then you grow up and realize how refreshing stability is.

15. Did Elle Woods Get Inspo From Bridget Jones Or Vice Versa

16. Vodka & Chaka Khan Are Still Foolproof Ways To Get Over Someone

They probably do, but they’re on everyone’s iPads and Kindles so no one knows that we’re reading self-help books.

That moment of her going down the pole with her butt in the air? That would be immortalized on the Internet forever if that happened today. Tweet of the week.

Bridget’s parents have it less together than Bridget does.

20. Colin Firth Is The King Of The Impassioned “I Love You” Speech

21. Bumbling Women In Comedy Have No Cooking Skills

Seriously, pick up a cookbook and follow the directions on the page. Why start with crazy complicated soup and caper berry sauce? How about a simple quiche or something?

22. Fighting Is So Not Attractive

Men’s fighting, especially over you, is not hot — it’s immature and a display of weird hyper masculinity. Pass.

Bridget is such a mess in this movie, so maybe me watching Bridget Jones’ Diary at such a young age taught me how to be a successful, mature adult. Thanks, Renée Zellweger, for your guidance and expertise!