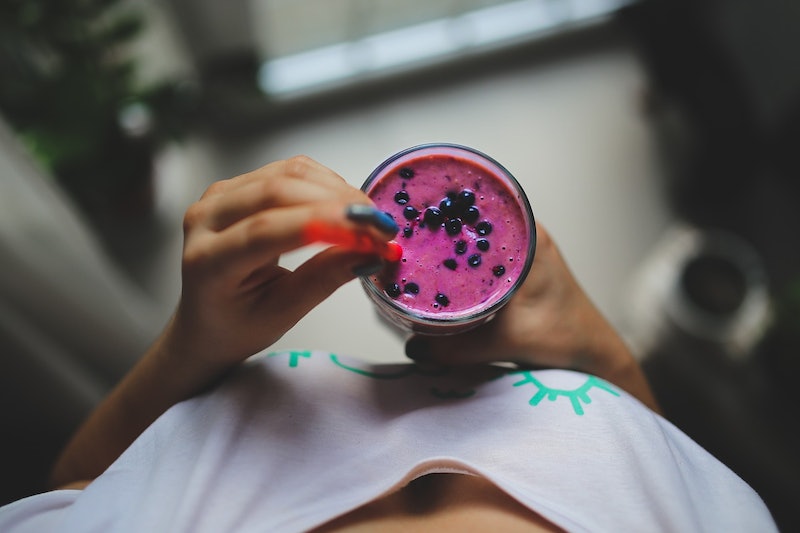 Believe it or not, there are ways to remove toxins from your body that we can all work on here and now. And, no, it's not going to require a week-long juice cleanse to do it. There are ways to remove toxins that are incredibly easy to incorporate into your day. Also, none of the tactics I'll mention below require shelling out a ton of money on expensive programs, either — another major win.

Technically, according to LIVESTRONG, detoxification is “the cleansing of the internal organs of the body from environmental pollutants, food waste, poisons, harmful bacteria and other substances such as alcohol, medications and parasites.” All I can think of when I considered the amount of gross things like this built up in the body is, “ICK!” Luckily, our bodies are built to get rid of waste and toxins on their own, but sometimes we all need a little each push in order for the toxins to really get cleared out of us. As you’ll learn below, it’s also important to prevent ourselves from ingesting additional unnecessary toxins, where possible. That’s as simple as buying the right foods and products. Here are seven ways to remove toxins from your body today.

1. Reach For The Lentils And Beans

According to Jaclyn London, M.S., R.D., a senior dietician at Mount Sinai Hospital in New York City, your body needs zinc to maintain a normal metabolic process in all of your organs. London spoke to Women’s Health and said, “Zinc is also important for many biochemical processes that aid in digestion and liver metabolism.” Suggested sources? London recommended to the outlet that lentils and beans are a great source of the nutrient.

Now that you’ve checked off zinc, let’s move on to fiber — another really important component of digestion. According to LIVESTRONG, you should eat about 30 to 40 grams of fiber each day to keep the toxins flushing out. The outlet quoted Ann Louise Gittleman, author of The Fast Track One-Day Detox Diet, who noted, “The colon is the garbage dump in your system, but fiber acts as a garbage truck hauling away the toxic waste.” Suggested sources include fruits and vegetables and whole grains.

3. Spend Some QT With Your Gym Buddy

That friend who is always begging you to come work out with them? Take them up on the offer today. After all, working out is an effective way to rid the body of toxins, according to The Telegraph. As you’re moving your body during a workout, it creates ideal conditions for the body to best circulate and sweat. According to JillianMichaels.com, this is because exercising increases oxygen to the cells, stimulating that needed circulation.

A great way to assist ourselves in ridding the body of toxins if by not putting unnecessary ones into our body in the first place. You probably hear this all the time from your health-nut friends, but eating organic foods is better for you — it’s not just a myth. As confirmed by Fox News, organic foods are grown without the use of pesticides or antibiotics. Rick Smith, co-author of TOXIN TOXOUT: Getting Harmful Chemicals Out of Our Bodies and Our World, spoke to the outlet and said of choosing organic, “You can significantly cut down on the toxic chemicals you eat if you’re being careful about your food choices.” The outlet recommended picking organic fruits, veggies, dairy, and meat as a means of minimizing the amount of bad pesticides and hormones you’re allowing into your body.

Just with the approach we took above just by avoiding putting the toxins into our body to begin with, let's talk cleaning products. The cleaning products you’re using have an effect on how many toxins are getting into you’re body, too. According to MindBodyGreen.com, many soaps, detergents, and other household cleaners contain chemicals that are bad for your health. The outlet suggested looking at labels closely before choosing the ones you’re going to purchase. Specifically look for labels that say “nontoxic” or the list ingredients that are plant-based.

LIVESTRONG suggested aiding a detox by drinking a glass of cranberry and orange juice mixed, as both are filled with antioxidants. Get started by doing this today, and then keep it up by drinking a glass of this mixture every day. Not an OJ fan? Focus on the cranberry, then — it’ll work wonders. LIVESTRONG noted cranberry juice enables the liver to better break down fat, and also helps act as a diuretic by drawing out toxins to be excreted.

Last but certainly not least is good ol' water. This shouldn’t come as news to many, but we should be drinking plenty of water each day. Specifically, Mayo Clinic recommends the average adult consume about eight 8-ounce glasses of water each day . Most basically put, water helps to flush the system, according to Shape. The outlet spoke to Matt Dower, spa director at Mirbeau Inn & Spa in Skaneateles, NY, who suggested adding a bit of lemon into your morning glass of water for extra benefits. He said, “Lemon helps re-hydrate the system and promotes digestion, which will help the flow of waste out of your body.”

For those who feel their body can use a good cleansing, no need to turn to those expensive juices. Rather, just try to incorporate some of the tricks discussed above into your daily habits today, and your body (and its now diminished number of toxins) will be very grateful.