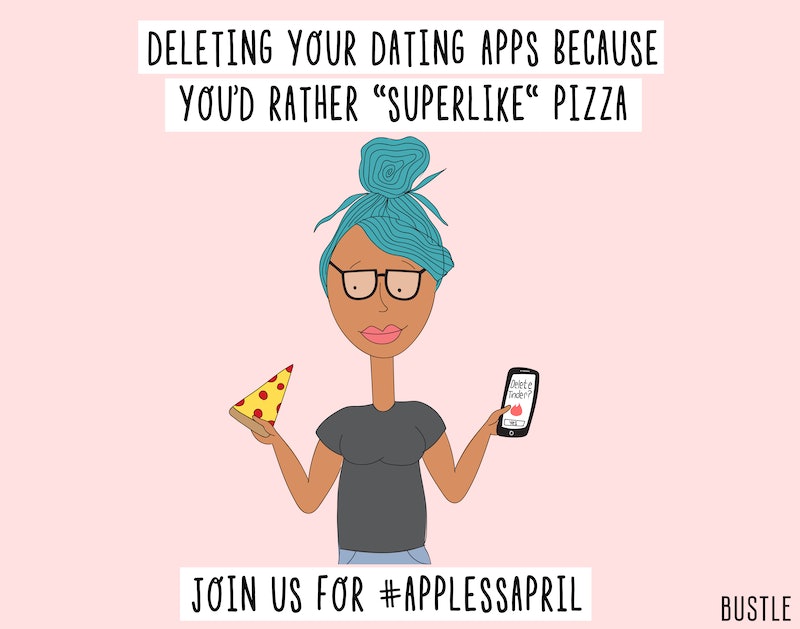 I made a promise to my parents that I'd stop using a pacifier when I turned four. At 6 a.m. on my fourth birthday, I ran downstairs, woke up my parents and led them into the bathroom so they could see that I had thrown my pacifier in the garbage and that I was now a legit ~big girl~. Today, I'm deleting my dating apps for a month, and while I didn't wake anyone up (consider yourselves lucky) early this morning to show that I'm giving up something I've grown accustomed to, deleting my dating apps was one of the first things I did when I got up this morning — and it felt great.

While my dating apps have been good tools for going on dates, confidence boosts, and meeting new people over the last three years, they've also been primarily the way I've been dating — and I'm burning out. So, it's time for a change, and it's called App-less April. I'm not totally breaking up with them yet, I'm using this as more of a time to reevaluate things and focus on meeting people offline.

"I suggest a break to my clients all the time," Ravid Yosef, Dating And Relationship Coach tells Bustle. "Sometimes our energy is what's attracting others and if we don't have enough self care in our life or get obsessive with our notifications, we start looking for validations outside of ourselves. Which in turn attracts the wrong kind of attention."

Maybe you're frustrated with people ghosting, maybe you want to change how or who you've been dating, or maybe you just want a challenge to give up something you love. Either way, there are plenty of reasons to consider deleting your apps. Here are why five other people are on board for App-less April too.

"My goal for App-less April is to take dating more seriously! I think in my head, I've turned Tinder and OkCupid into a game — I want to see how many matches I get, how many guys I can talk to or get phone numbers from, etc. Occasionally I'll meet up with someone from a dating app and go on an actual date, but I rarely make the effort to ever go on a followup date — mostly because I'm already back on Tinder swiping right on the next batch of guys. I'm hoping App-less April will help me refresh my mindset a little bit. I think dating apps can be really useful — I just don't really have the right attitude about them right now." - Kathryn

"After a bad breakup at the end of last year, I downloaded Tinder and Bumble to distract myself with mindless swiping and very casual dating. These apps could quantify with my increasing number of matches what my closest friends were telling me — and I didn't really believe — that I was funny, smart, and an awesome catch. The boost of confidence from a random stranger's approval somehow became more meaningful than what people who really knew me were saying. Instead of spending my time on a handful of first dates, I want to focus this month on growing new friendships by reaching out to acquaintances who are stuck in the "friends of friends" category. I already asked that girl who bonded over running and Tina Fey with me on a friend date, no swiping required!" - Rebecca

3. To Get Better At Approaching People IRL

"I'm doing App-less April for a few reasons. As a queer woman, I tend to rely on Tinder and other apps to meet other queer women. There aren't a lot of queer female spaces, and dating apps have kind of filled that gap. But I think it's easy to objectify people on dating apps, and I'd like to get better at making real connections. I also think I tend to hide behind my screen, and I'm not so great at approaching people in real life, because it's less of a risk. So I'm hoping I'll get better at taking the plunge by putting my actual body into queer spaces and get better at approaching people IRL. I'm a little scared, but no risk, no reward!" -Emily

4. They're Addictive — And Not Real

"My participation in App-less April is a long time coming. Dating apps are almost as addictive as games like Candy Crush — you have these apps constantly at your fingertips in which you can keep swiping and matching and reaching the next level of the game. But if you never actually meet IRL, it usually means "game over" because expectations that are impossible to live up to have already been set through artful cropped profile pictures and witty taglines. It's just not real. And I'm over it. (For April anyway)" - Lauren

5. To Stop Feeling Bad About Being Single

"When it came down to it, I realized I got more frustration from dating apps than I did quality, worthwhile dates. Between the tons of uncomfortable, unsolicited messages I would get in my inbox and all of the ghosting that would take place when I did find someone interesting, I became very fed up. As a result, I knew that deleting them would be the best thing for me. It helped me stop this perpetual cycle of feeling bad for myself for being single, and alternately allowed me to embrace who I am and focus on things that matter to me, like my career." - Kristin

More like this
50 Valentine’s Day Instagram Captions To Post If You’re Single
By Jessica Booth, Lexi Inks and Carolyn Steber
12 Active Date Ideas That'll Get You & Your Boo Outside
By Lexi Inks
18 Hinge Prompt Answers To Try If You’re Looking For Something Casual
By Lexi Inks
11 Super Bowl Instagram Captions To Use On Game Day — Even If You Don’t Like Sports
By Alexis Morillo
Get Even More From Bustle — Sign Up For The Newsletter
From hair trends to relationship advice, our daily newsletter has everything you need to sound like a person who’s on TikTok, even if you aren’t.