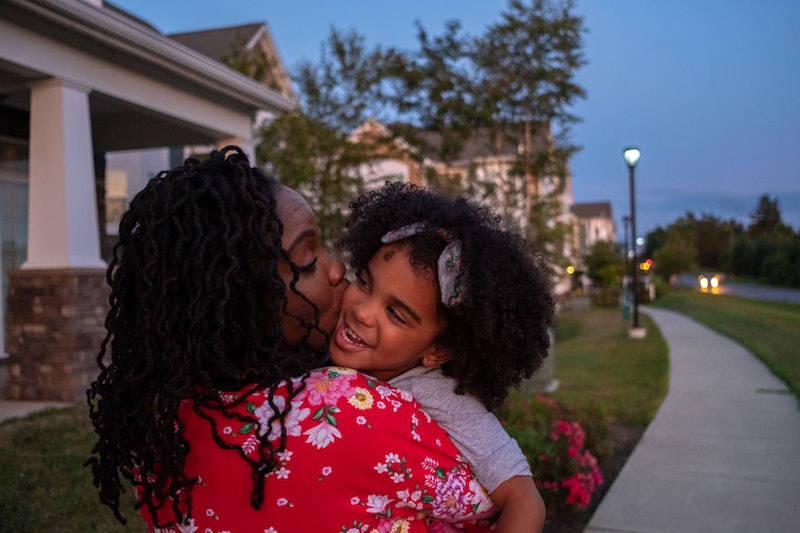 Mother's Day is an amazing holiday that lets you celebrate and fawn over Mom, the first woman in your world post-birth, and the woman who stands in your corner regardless of the mistakes you make while going through life. While we should really celebrate our moms on a daily basis (since she's one fantastic lady), it's important to know the history of Mother's Day, and why we choose one day out of the year to truly make sure she feels loved. Is it really a commercial holiday after all, like we immediately assume out of most love-related holidays? Or is there a deeper history behind it that helped it become what it is today?

Celebrating mothers originated from the Greeks and Romans, but they weren't the ones who decided that bouquets of flowers and Sunday brunch would be a standard tradition. Turns out, the U.S. celebration of Mother's Day is quite intriguing. Back in 1908, Anna Jarvis decided to observe the holiday, and it picked up quickly — it became an official holiday just a few years later, in 1914. But, Jarvis can't take full credit for the success of Mother's Day. In fact it was her mom, Ann Reeves Jarvis, who started putting together Mother's Day work clubs to try and raise awareness of, and lessen, infant mortality.

Ann Reeves Jarvis hailed from Virginia, and through her clubs, tried to promote sanitary conditions for new mothers. Tuberculosis was quite common back then, and many ill mothers passed on germs and contaminated milk to their children, who ended up suffering as well. Ann Reeves Jarvis truly wanted to support other women, and strived to both lend a helping hand, and raise money for medications that would help eliminate any issues before they became problematic. She suffered many losses herself, having been pregnant approximately 13 times, yet only having four children reach adulthood — one being Anna.

Ann Reeves Jarvis was also quite compassionate towards Civil War soldiers, as well. She definitely wasn't a fan of the war, and often used her work clubs to host meetings that promoted pacifism. Due to this, she was asked to help with an event that brought soldiers together, called "Mothers Friendship Day," which took place in 1868. Both the North and the South attended, and healed along with the rest of the community. It was a fantastic outcome, especially based on the fact that it was heavily protested.

That's where Anna Jarvis comes in. After her mother passed away in 1905, Jarvis really wanted to do something to celebrate her giving nature and warm spirit. In 1907, she managed to create a service honoring her mom. That next year, in 1908, she decided to make it a bit more widespread.

Two celebrations happened on May 10, 1908 — the first took place in Grafton, West Virginia, and the second in Philadelphia. The former was at a church where her mom helped with Sunday school classes, and the latter was where Jarvis was currently living. Approximately 15,000 people attended the Philadelphia event, which proved that the holiday had a lot of momentum behind it. In 1914, President Woodrow Wilson officially declared Mother's Day to fall on the second Sunday in May.

One thing's for sure — Jarvis had a firm idea of what she wanted this holiday to be. In fact, it's "Mother's Day" and not "Mothers' Day," since in Jarvis' eyes, the holiday should be an individual time to appreciate and reflect upon your own mother, and not the mothers of others.

Of course, things changed over time. Mother's Day started to become a bit too commercialized for Jarvis' taste. Instead of reflecting on the greatness of Mom at home, people were shilling cards and candies to try and make a few dollars for themselves. So, pretty much, it quickly turned into what we see Mother's Day as today. As a reaction, she put a lot of money towards regaining some more control over her holiday, and even started up the Mother's Day International Association to help aid her in protesting Mother's Day.

And protest she did. She boycotted events and crashed conventions to try and get her point across. And she didn't give up until the early 1940s.

Here's where things get grim. Jarvis passed away in 1948 without completing her mission, at a sanitarium in Philadelphia. Her disappointment over Mother's Day eventually took a toll on her, both physically and mentally. It's definitely a rough end for such a pioneer that came from a truly legendary family.

This Mother's Day, don't feel the need to choose between Jarvis' way, and the universally recognized way — celebrate your mom in a way that works best for both of you.

More like this
11 Podcasts About The History Of Juneteenth
By Emma Carey
13 Summer Solstice Quotes To Celebrate The Longest Day Of The Year
By Sadie Trombetta
The Summer Solstice Spiritual Meaning, Explained
By Jessica Booth and Brittany Beringer
18 Father's Day Poems That'll Make You & Your Dad Tear Up
By Michelle Regalado and Siena Gagliano
Get Even More From Bustle — Sign Up For The Newsletter