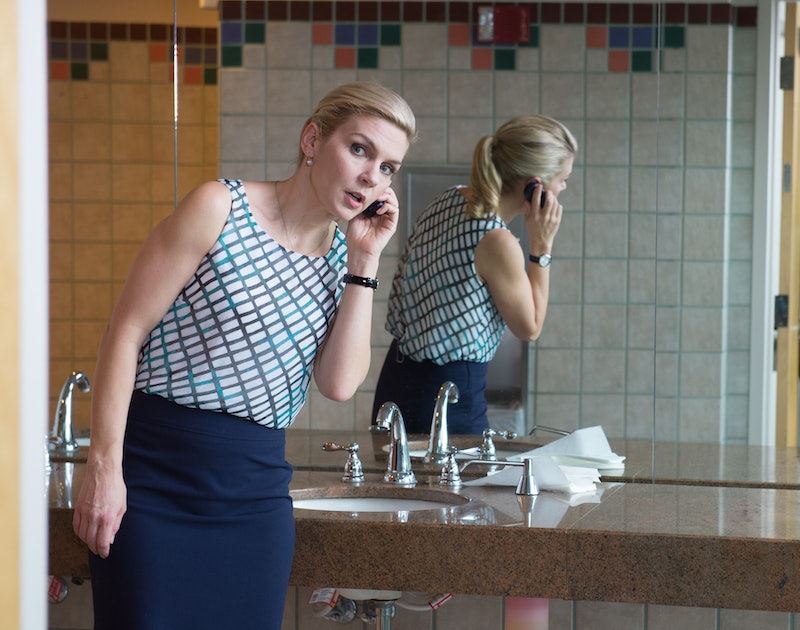 We should've known things wouldn't be quite so easy. Although Jimmy McGill and Kim Wexler ended last week's episode of AMC's Better Call Saul having made an exciting plan for their future — pooling their resources and sharing office space will maintaining two separate legal firms — the first steps taken towards actually achieving that plan this week were shaky ones, to say the least. The first hiccup on the road to success was a disagreement between the lovers/partners on how Kim should quit her job at Howard, Howard & McGill… and things just spiraled out from there.

Given the fact that the single most important thing when setting up a solo practice is the acquisition of clients, Jimmy as of the opinion that Kim should do anything she could to poach Mesa Verde — the giant account that she had just brought to HHM a few weeks earlier. If she slipped a resignation letter under Howard's door that night, then technically she would be free to poach HHM's clients starting the following morning, wining and dining her Mesa Verde contact Paige while Howard was blissfully unaware on the golf course.

Unsurprisingly, Kim balked at what she viewed as underhanded tactics. Pointing out that this was why they were setting up two distinct firms — so they could each practice the law in their own way — Kim decided to take the high road and give Howard the courtesy of resigning in person. However, she soon realized that Jimmy was probably right after all; Howard's office door had barely closed behind her when she heard her former boss asking his secretary to get Mesa Verde on the line.

After a panicked run through the halls of HHM, Kim managed to get Paige on the phone and set up a meeting… which she promptly crushed, assuring Paige and her Mesa Verde colleague that what they needed was a firm tailor-made and wholly devoted to their bank. Of course, Howard would never go down so easily; so he also arranged a meeting with Paige and her colleague and — with a little help from Chuck, humblebragger extraordinaire — persuaded the bank to stay with their larger, more experienced firm.

It was undeniably a crushing blow. Although Jimmy had found Kim and himself some promising office space, they now had a grand total of zero clients with which to pay the bills. Undaunted, Jimmy reminded Kim that such a scenario is exactly why they had agreed to pool their resources: so they could help each other until things got more steady. So they signed the lease and continued to move forward with their plan, even in the face of HHM's stubborn interference.

This setback was admittedly a bit of a comedown after last week's triumphant Kim-centric episode. But any drama would be boring without obstacles… and we already know how vindictive both Chuck and Howard can be, so this shouldn't really have come as much of a surprise. Hopefully Jimmy and Kim can win at least one for the team in Season 2's final two episodes.