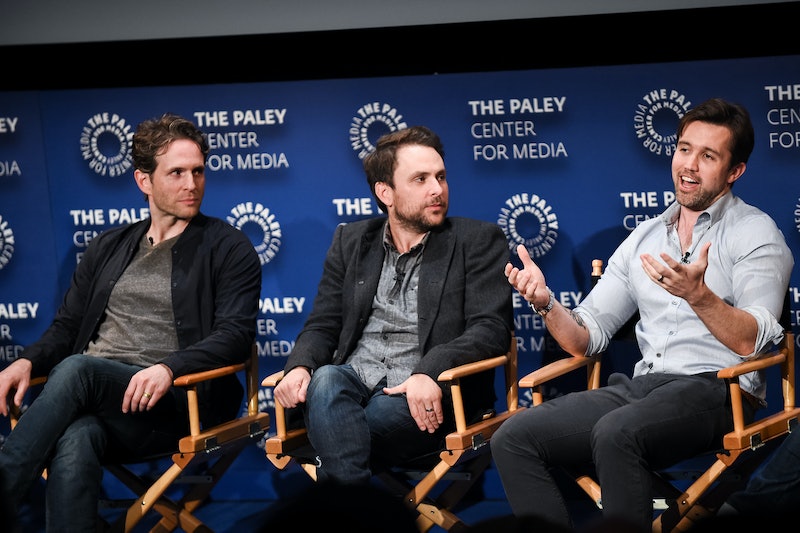 Fans have seen 11 seasons of dark comedy and weirdness of epic proportions on It’s Always Sunny in Philadelphia (with three more on the way!), and so it's safe to say that the cast has endured its fair share of awkward moments, both on set and off. Especially when there are two real-life married couples involved — who aren’t couples on the show, by the way. As you can imagine, things get strange pretty quick, and at the Paley Center’s "Evening with It's Always Sunny in Philadelphia" in Los Angeles Friday night, the cast explained to Bustle just how odd it gets.

"It’s a weird show, things get weird all the time," Charlie Day said at event. Interjected co-star Kaitlin Olson, "It’s kind of always weird on set, but not in a bad way." But what do Day (Charlie), Olson (Dee), Glenn Howerton (Dennis) and Rob McElhenney (Mac) agree was the most uncomfortable moment ever on set? Apparently, it's when Day and Olson's characters had to play tonsil hockey in front of Olson's real-life husband, McElhenney, back in season 10.

All IASIP diehards might have thought they witnessed peak strange on the FXX show with the Green Man or some very questionable siblings with even more questionable V-necks, but little do they know, the most uncomfortable of instances actually went down when the cameras weren’t even rolling. In case you’re more lost than a naked Frank stuck in a leather couch, Olson and McElhenney got hitched in 2008 (they have two kids together) and Day married "the waitress" Mary Elizabeth Ellis in 2006 (they have one child together). And that, friends, is what made this scene so uncomfortable.

While Olson and Day both agree this moment was the strangest thing they'd ever experienced on the show, Olson's hubby told Bustle that he "[o]ddly, was the one who was not weirded out, [but] Charlie was very weirded out by the whole thing." And apparently it was co-creator and executive producer Howerton who made things worse. Recalled Howerton, "Rob and I were like, ‘Take her clothes off! What are you doing? C’mon, let’s go!,’" he said.

As if that wasn't weird enough,, Howerton added that he wants to take things a step further and make Day, Olson and the rest of the planet that much more uneasy with this "no joke" idea: "I want to do a thing where they start to have sex and then they do have sex, for like, eight straight minutes. And we show it. All of it. I’m not kidding. A so-excruciatingly long and uncomfortable montage of them having sex. Nobody else, Charlie, wouldn’t go for that."

But he’s determined. "We’ll get one," he added.

Here’s to very awkward on-set sex, three additional (and hopefully more) glorious seasons of It's Always Sunny, and of course, plenty of weirdness that’s yet to come for these crazy kids.

More like this
Here’s What Happens To Bill & Frank In 'The Last Of Us' Video Game
By Brad Witter
'The Last Of Us' Episode Schedule Competes With The Super Bowl & Oscars
By Brad Witter
Grammys Host Trevor Noah Made Adele's Dream Of Meeting The Rock Come True
By Brad Witter
Pedro Pascal Barely Got Through The "Lisa From Temecula" 'SNL' Sketch
By Stephanie Topacio Long
Get Even More From Bustle — Sign Up For The Newsletter
From hair trends to relationship advice, our daily newsletter has everything you need to sound like a person who’s on TikTok, even if you aren’t.