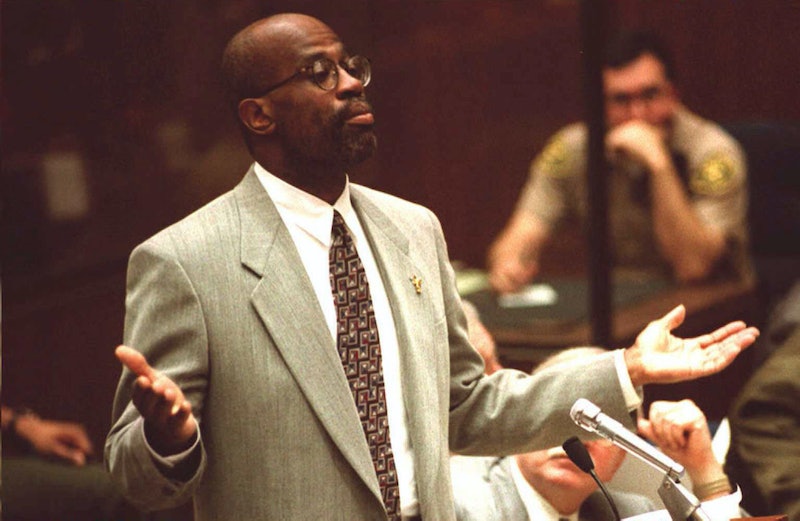 So far, The People v. O.J. Simpson: American Crime Story has presented prosecutors Marcia Clark and Chris Darden in a way that lets viewers have a lot of sympathy for them. This feeling will likely continue in the season finale of American Crime Story, when the series portrays Chris Darden's post-trial press conference, when he became very emotional about the verdict. After Simpson was found not guilty of the murders of Nicole Brown Simpson and Ronald Goldman, the prosecution team of Gil Garcetti, Clark, and Darden spoke at a press conference. Yet, Darden was unable to finish his statement during the media event since he broke down mid-sentence and left the platform.

In an emotionally unfettered moment, Darden stood behind the podium at the conference on Oct. 3, 1995 and — based on audio clips from CNN and video from the AP Archive — said, "We came here in search of justice. You will have to be the judge, as I expect, as to whether or not any of us found it today. But I'm not bitter and I'm not angry. But I'd also like to thank the lawyers on our prosecution team. I am honored to have..." before abruptly stopping his statement. He then took a moment to contemplate, shook his head, and walked away from the microphone. As his head was down and he was bent over, Darden was comforted by the people standing closest to him before Clark came over to place her hand gently on his back. With that, he stood up straight and made his way through the crowd and off the platform.

You can watch the moment from the actual press conference in the below video, starting at 45 seconds.

Expect the actor who portrays Darden — the stellar Sterling K. Brown — to make the most of this moment during the season finale on Tuesday, April 5. And thanks to American Crime Story, people who watched the press conference 21 years ago now have a much better understanding as to why Darden was too frustrated to even continue speaking. (Although, anyone following the trial on TV probably had a pretty good understanding of why he reacted like this, even without the behind-the-scenes insight American Crime Story provides.)

If you're wondering how Darden felt during the press conference in his own words, the one and only Oprah Winfrey covered that for you. Winfrey had Darden on her show Oprah on Feb. 26, 1997 and asked him what he was thinking during this intense and emotionally vulnerable moment. His response was, "Know what I was thinking? I was thinking that I was about to be just like Furhman. Just like O.J., I was about to lie." (Simpson maintains his innocence. Former detective Mark Fuhrman testified that he had not used a racial slur in the past 10 years, but tape recordings of him saying the n-word repeatedly were discovered during the trial. As reported by the Chicago Tribune, Fuhrman later pleaded no contest to perjury due to that testimony.)

"I don't mind losing, I've lost before," Darden continued in the interview, which you can watch above. "But to lose this way. To lose like this. To have this process turned into a mockery, a circus, a joke. It was a joke. It was a waste of my life. A waste of the lives of my colleagues. It was pointless. It was pointless. We gave up so much of ourselves for nothing. Nobody cares. And I think that's wrong. I think it's wrong."

Over 20 years later, I think American Crime Story has made some people really care about the time that Darden, Clark, and their colleagues put into this trial, regardless of the verdict.