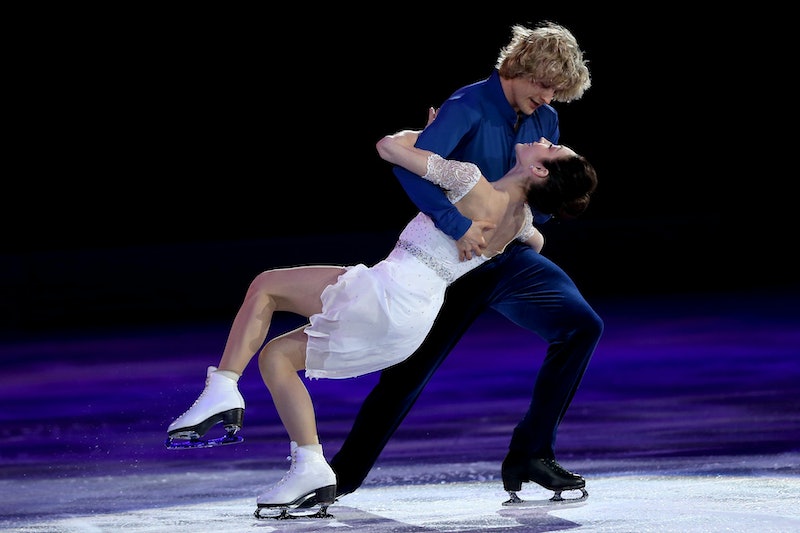 The Sochi Winter Olympics are proving to just be one Hunger Games comparison after another. We already had the Opening Ceremony complete with Effie Trinkett-like women, but now one ice skater's story is hitting a little too close to Katniss Everdeen's home. Olympic ice dancer Charlie White is engaged in a love triangle that almost perfectly emulates the heroine's own love story.

Remember when Katniss and her tribute partner Peeta have present themselves as a love-crazed couple to convince the districts not to rebel? But while her relationship with Peeta is on display, Katniss has a sort-of-boyfriend in her hunting buddy Gale back in District 12. Katniss has to keep Gale on the down low so she can keep up the Katniss + Peeta charade and have a chance at fooling the president and saving her family.

But now Katniss' love triangle has come to life for White, who is staying mum on his relationship to model and former ice skater Tanith Belbin to further promote the idea that he's dating Olympic partner Meryl Davis. The figure skating duo is favored to win the gold in the ice dance competition and it could well be because of White's carefully constructed love charade.

"We don't really talk about it," he said when asked about his relationship with actual-girlfriend Belbin. "As an ice dancer, we take our on-ice relationships so seriously, and that's really the way we like to go about it. [Davis and I] are just presenting ourselves as a team, and all the rest of that [with Belbin] can wait for later."

White doesn't just downplay his relationship with Belbin when competing, but actually goes out of his way to portray the air of love between him and ice skating partner Davis. "Obviously we get a lot of questions about whether the two of us are dating, and that's a good thing, because that means we're doing our job out on the ice," he said. "Meryl and I are oftentimes trying to portray people who are in love."

When White talks about portraying people in love it sounds just like what Katniss and Peeta were trying to do. In Catching Fire Katniss narrates their attempt at keeping the ploy believable.

"During ceremonies, we are solemn and respectful but always linked together, by our hands, our arms. At dinner, we are borderline delirious in our love for each other. We kiss, we dance, we get caught trying to sneak away to be alone."

And much like White's attempt to present the ice skating romance to win favor with the judges, Katniss says something similar about her and Peeta. "Our romance became a key strategy for our survival in the arena," she says in Catching Fire.

Somehow White has turned himself in a fictional character from a YA novel. Only he's slightly less likable because Katniss was trying to survive, and White just wants to win a medal. Though perhaps to an Olympian, they are one in the same.