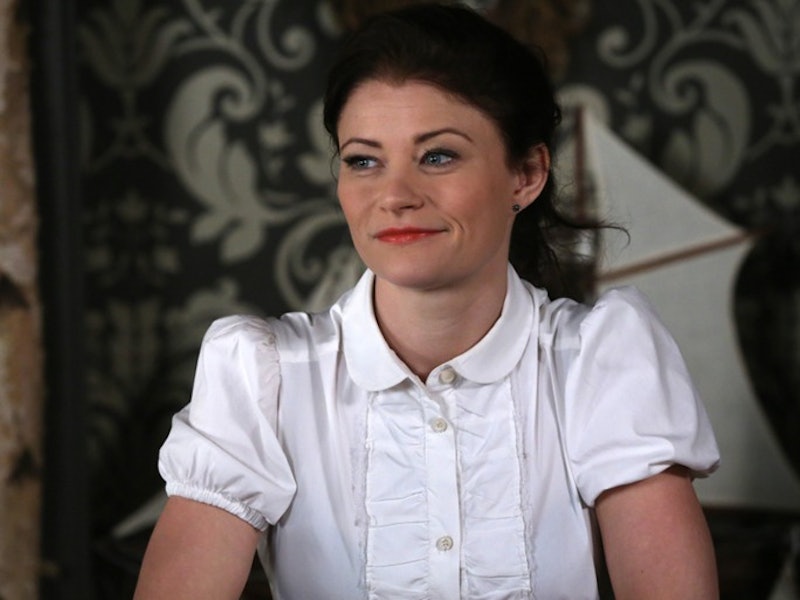 I was wondering how long it would take for Belle to find out that she's pregnant on Once Upon a Time , and now, thanks to Sunday night's episode "Our Decay," the truth has come to light much sooner than expected. But as happy as she was upon initially hearing the news directly from Rumple during her little visit to the Underworld, this revelation also came — like so many things on this show — with a very big price. That's because, in a very shocking twist, Rumple did the most unexpected thing: he told the truth. Belle knows that Rumple is the Dark One again. She knows about the contract he made regarding his second born child. And it leaves her with a very important decision to make — whether or not Belle should stay with Rumple.

You see, Rumple knew that this little confession of his meant the opening up the possibility of losing Belle forever. However, he also knew that it wasn't just the man inside of him that she originally fell in love with. It was the man and the beast. Even when he was a coward, he always craved power. That has never changed and he's not willing to ever give it up now that he has it again. Not even for Belle, who he still truly loves. So he gave her a choice: accept the man that he truly is and recognize that she loves both sides of him (there is no one without the other), or leave him for good.

So what should Belle's decision be? Is it completely wrong to love a bad boy? I've always been a Rumbelle supporter, which probably makes me a bit biased, but I think just being around Belle makes Rumple a better man, whether he sees that in himself or not. She could even help him to use the power that he cherishes for good rather than evil. And hey, there's nothing wrong with feeling drawn to the darkness. (We've all been there.) Then there's the fact that he actually came clean with her about everything rather than succumbing to more lies and secrets. If that doesn't prove he's growing as person, then I don't know what does.

But no matter what decision she ends up making, it's nice to know that she wasn't tricked or manipulated into doing so. Whatever she decides will be of her own doing, which is really the best gift Rumple could've given her.