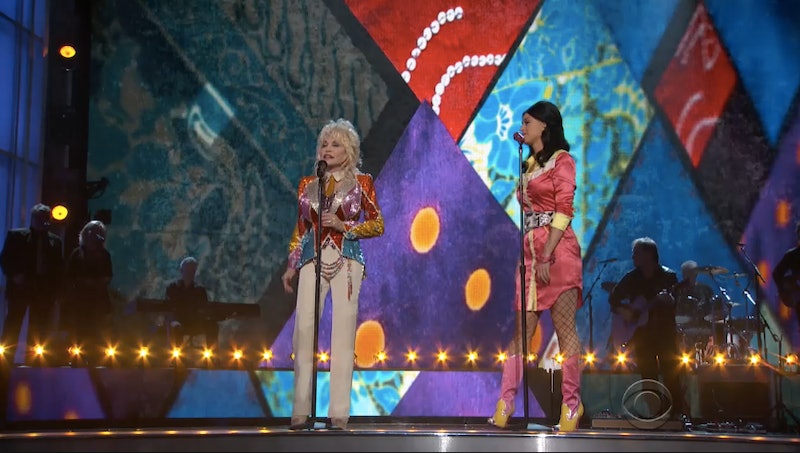 There were plenty of A-list country musicians who performed at this year's ACMs, from Carrie Underwood to Keith Urban. Really, the ACM Awards were more of a concert than a traditional, cut-and-dry award show, with the guests at one point standing on their feet, dancing. But no performance was nearly as hyped as Dolly Parton and Katy Perry's duet at the 2016 Academy of Country Music Awards.

Part of the interest in the performance was the unlikeliness of the pairing. Perry is best known as a pop icon, while Parton is country royalty, and on the surface, it doesn't seem like the two musicians and singers have much in common. But once you start thinking about it, the duo makes a lot of sense. Both women are divas with powerful pipes, and both are known for their penchants for over-the-top looks. If anything, the costumes would be as much of a reason to tune in as the duet itself. Parton once sang, "It's hard to be a diamond in a rhinestone world," after all.

The women gave us a taste of what was in store when they showed up on the ACMs red carpet. Parton opted for a more neutral-colored dress, but the sheer, beaded top and rhinestone-encrusted skirt were classic country glitz.

Perry, meanwhile, was rocking true country kitsch in an over-the-top look that made her look like cowboy Barbie, which, really, is Parton's whole vibe. As Parton would say, "It costs a lot of money to look this cheap."

When the two singers finally hit the ACM Awards stage at the MGM Grand Garden Arena in Las Vegas, they definitely sparkled. Perry came on stage first, to present Parton with the Tex Ritter Award for her TV movie Dolly Parton's Coat of Many Colors, in a pink cowgirl outfit with yellow tassels and matching high heel boots.

Parton came onstage to accept the award in a sequined coat of many colors and white pants, with her signature blonde up-do.

The duo then went on to perform three of Parton's biggest hits: "Coat of Many Colors," "Jolene," and "9 to 5." The set was simple, nothing more than the stage, which really let these eye-catching outfits shine.

Once the set was over, Perry got on her knees and bowed down to the true queen of country, in their complementary sparkling country outfits.

As Katy said, she and Dolly are cut from the same lamé, after all.