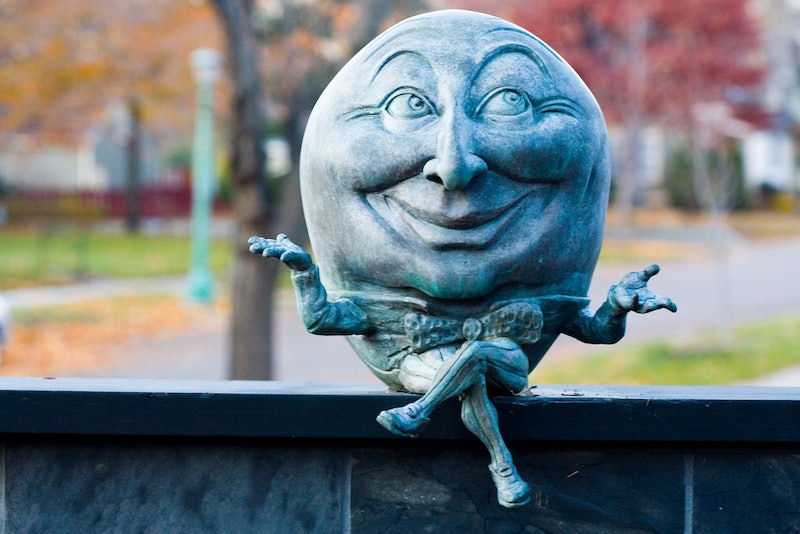 Many times, children’s books deal with very innocent topics, but in early times, it seems that children's nursery rhymes actually had very dark backstories — those kids didn't grow up listening to Harry Potter audiobooks or reading DC comic books. There was no If You Give a Moose a Cookie in the medieval era. No Renaissance children grew up with the beautiful illustrations in Olivia or The Very Hungry Caterpillar. Even the spunky Where the Wild Things Are would be too tame for these hardcore kids, because most of their nursery rhymes referenced events in history. And those historical events usually involved murder, sex scandals, beheadings, poverty, and disease.

Some might think it crazy to teach innocent children these types of nursery rhymes. And sure, it’s true that the following poems have pretty creepy backstories. But first of all, the dark themes are heavily veiled in metaphors and allusions to historical events. Most people who have heard the following poems a hundred times, and even sang them on the playground, probably still have no clue as to their origins. And secondly, you know the saying: those who forget history are doomed to repeat it. So perhaps medieval nursery rhyme authors were merely trying to remind children of their history, so they would create a brighter future. One where parents get to read their children The Day the Crayons Quit instead of one of the following.

How does your garden grow?

With silver bells, and cockle shells,

And pretty maids all in a row

The "Mary" in this rhyme apparently refers to Mary Tudor... aka Bloody Mary. Her "garden" is actually a cemetery, and the silver bells and cockle shells are torture devices. And the pretty maids? Legend says that this references a guillotine, which was nicknamed "The Maiden."

Ring Around The Rosie

Ring around the rosy

A pocketful of posies

We all fall down!

According to urban legend, this nursery rhyme is a reference to the 1665 Great Plague of London. The "ring around the rosy" is supposedly a reference to the bubonic plague rash. The "pocketful of posies" describes the handfuls of herbs people would carry to mask the smell of the sickness. And the last two lines? They're the darkest of all: "we all fall down" refers to everyone dying, and the "ashes" are the cremated bodies. Pretty dark for a children's rhyme.

Humpty Dumpty sat on the wall

Humpty Dumpty had a great fall

This nursery rhyme isn't about a giant egg, as suggested by most illustrations in children's books. Humpty Dumpty was actually a cannon used during the English Civil War. It was destroyed by cannonballs, fell into a marshland, and could never be repaired. Then the illustrator of Through the Looking Glass by Lewis Caroll randomly decided to illustrate the poem with a picture of a large egg, and the rest is history.

They all ran after the farmer's wife,

Who cut off their tails with a carving knife,

Did you ever see such a thing in your life,

Here's another "uplifting" children's nursery rhyme featuring Mary Tudor. In this rhyme, the three blind mice supposedly symbolize three noblemen who were prosecuted for conspiring against the queen. Though some legends say she chopped them up, apparently she actually just burned them at the stake. And then someone wrote a cute kids' poem about it.

London Bridge bridge is falling down, down

London Bridge bridge is falling down, down

Legend has it that this rhyme is about the fall of Anne Boleyn, the second wife of English King Henry VIII. She rose to power... but then "fell down" when she was accused of incest and adultery, and ultimately beheaded. A lovely song for kids to sing.

All around the mulberry bush

The monkey chased the weasel;

The monkey thought 'twas all in good sport

According to Cockney slang, "pop" means selling something at a pawn shop, and "weasel" means coat. By this translation, this rhyme is about a poor man trying to dress well on a Sunday. He manages by pawning his coat on a Monday and buying it back before Sunday rolled around. Never too early to teach kids economics, right?

Kissed the girls and made them cry

When the boys came out to play

"Hmm, what topic would make a wonderful children's nursery rhyme? Ah! I've got it! A sex scandal." This is what the author of this rhyme was apparently thinking, because this poem isn't about a bizarre little elementary schooler. It's actually a reference to George Villiers, the First Duke of Buckingham. First, he was known for being The Queen Consort of France's lover. Eventually, though, George Villiers won the heart of King Charles I himself. But when Parliament stepped in, George Villiers didn't exactly fight for the relationship... hence the last two lines of the poem.

Jack and Jill went up the hill,

To fetch a pail of water.

And broke his crown;

And Jill came tumbling after.

King Louis XVI ("Jack") was beheaded ("fell down and broke his crown") in 1793 during the French Reign of Terror. His wife, Marie Antoinette ("Jill") came "tumbling after." That's the interpretation of this classic childhood rhyme according to some theories.