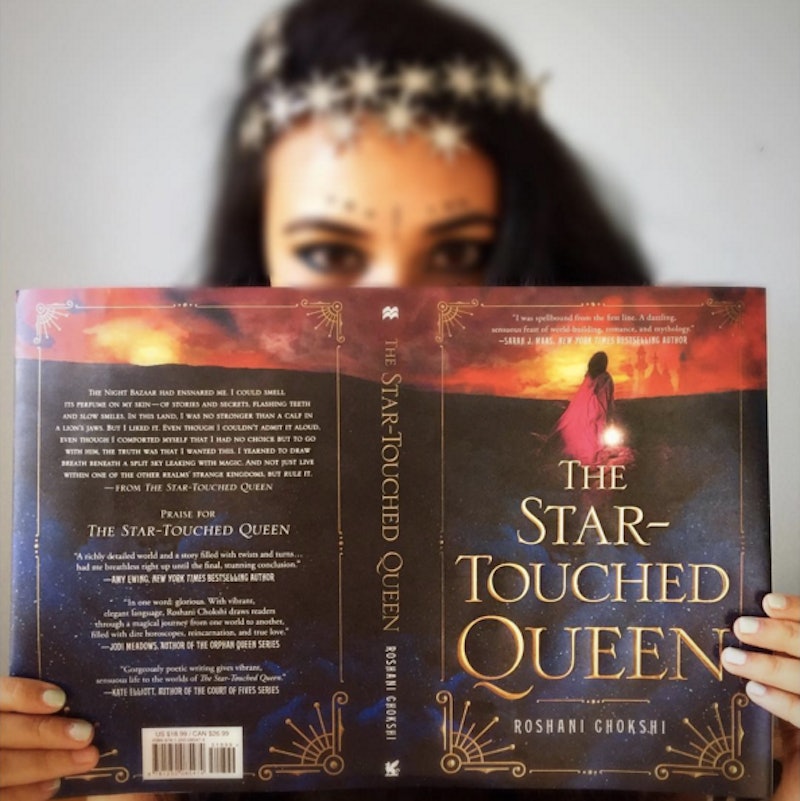 In Roshani Chokshi's debut young adult novel, The Star-Touched Queen , Greek mythology and Indian folklore come together for an unforgettable, fantastical story of love, mystery and finding oneself.

Princess Mayavati, aka Maya, was born cursed; her horoscope has promised that her marriage will be filled with death and destruction. Because of this less-than-auspicious fortune, Maya, now 17, is mostly ignored by the royal court. She relishes her independence, spending her days reading, spying on her father, the Raja, and pursuing her scholarly endeavors.

However, her world as she knows it gets tipped on its axis when she discovers that she will marry a foreign prince named Amar in an attempt to prevent war between their nations. But that's just the beginning of her story. As a love blooms between her and her mysterious new husband, she begins to suspect that everything is not as it seems: Is her life in danger? Can she trust anyone besides her husband? Is Amar as good as he appears to be?

In this sneak peek of one of April 2016's most highly anticipated YA novels, Maya travels with Amar to his kingdom in Akaran. In order to get to his home, they must pass through the mythical, enchanted Night Bazaar — a magical wonderland Maya believed to be a figment of tales and imaginations. Read the excerpt below, and order The Star-Touched Queen now, available on April 26.

I tilted my head back, letting the wind sting my eyes. Every now and then, my hand crept to my heart, reassuring me that there was a heartbeat. Freedom was bittersweet. I would never spend another afternoon drawing beside Gauri. I would never lose hours in the honeycomb rooms of Bharata’s archives. The future was blank and the weight of every thing unknown left me dizzy and grounded.

We rode beneath a canopy of golden trees. I glanced behind me. We had long since left the road and no ghost of its existence loomed on the horizon. The jungle had swallowed it whole.

“Where are we going?” I asked. “The main road leads to all of the major kingdoms.”

The water buffalo ambled toward a cave matted with black vines. Compressed earth formed the walls, and veins of quartz ran through the cave.

“To get to Akaran, we must first go through the Night Bazaar.”

I nearly choked. Maybe there was such a thing as magic, but the Night Bazaar was fantasy. Its provenance lay in childhood, in dreams. Amar was teasing me. I raised an eyebrow, thinking back to Yudhistira’s bullying incident and the cloud of bees that chased him into a puddle.

Maybe there was such a thing as magic, but the Night Bazaar was fantasy. Its provenance lay in childhood, in dreams.

The dark tunnel gave way to light. A divided sky illuminated an unearthly city. To the left, the moon bathed small shops and twisting plants in a pearly light. To the right, the sun beamed and soft sunshine fell over strange trees shaped like human limbs and animals. The sky, ever divided by day and night, blended into a spectrum of rainbow. Creatures both impossibly tall and short slipped between shadow and light. An ethereal elephant whose hide shimmered pearlescent dipped its trunk into the pocket of a tall mouse. Twelve birds with comely female faces batted their eyelashes at a group of naga men who slithered closer, their scales flashing emerald. A child with the hunched wings and crumpled beak of a vulture pouted beside his mother, who had neither wings nor beak, but the sweeping train of a peacock...

The dark tunnel gave way to light. A divided sky illuminated an unearthly city. To the left, the moon bathed small shops and twisting plants in a pearly light. To the right, the sun beamed and soft sunshine fell over strange trees shaped like human limbs and animals. The sky, ever divided by day and night, blended into a spectrum of rainbow.

The last of my taunt died in my chest and I sat there, gaping at the world around me.

This was the Night Bazaar.

All of my calm slipped away. In my head, I pictured royal maidens dragged off to serve potbellied rakshas or princesses turned scullery maids in the bowels of the Night Bazaar. I scrambled off the water buffalo, biting back a wince as I struggled for some balance. Catching my breath, I backed away from Amar. In the shadows, the hood over his face glinted sinister.

“Let me explain,” he began. “I understand that this is not—”

I lunged for a stick and brandished it at him. “Who are you?”

Amar laughed. “A stick? I’ve brought you to the Night Bazaar; do you really think a stick would protect you?” I gripped the stick harder. “Not that you need protection from me,” he added quickly.

“Where are you from?”

I gave him a hard look, but I wasn’t sure how much he could see through his covering. “What are you?”

He drew himself up. “A raja and your husband.”

There was no hesitation in his voice.

“Why have you brought me here?” My voice shook. I couldn’t stop staring at the Night Bazaar. There it was. And here I was. Standing on the same plot of land shared with beings that— until now— had only existed in stories. “What do you want from me?”

He stopped. The smile was gone from his lips.

“I want your perspective and honesty,” he said, before adding in a softer voice, “I want to be humbled by you.”

Heat flared in my cheeks. I paused, the stick in my hand falling a fraction. Perspective and honesty? Humbled by me? Rajas never asked for anything other than sons from their consorts.

“You know nothing about me.”

“I know your soul. Everything else is an ornament.”

His voice wrapped around me, lustrous and dark. It was the kind of voice that could soothe you to sleep in the same moment that it slit your throat. Still, I leaned toward it.

“Come with me,” he said. “You would never be content in that world. They would cage you. They would give you playthings of silver and silk.”

His teeth burned white when he smiled. “I could give you whole worlds.”

Something tugged at me. The pull was far stronger than fear or attraction—it was ambition. The court of Bharata didn’t expect me to be anything other than a pawn. But Amar was asking for more. He wanted my opinions, my thoughts. He wasn’t offering me a prized seat among his wives. He was asking me to rule. I knew my father. He would have already announced that I was dead, and the kingdom would ask no questions. It might even be better for me to stay away from the palace and let them grieve me falsely, rather than hate me openly. There was nothing left for me in Bharata.