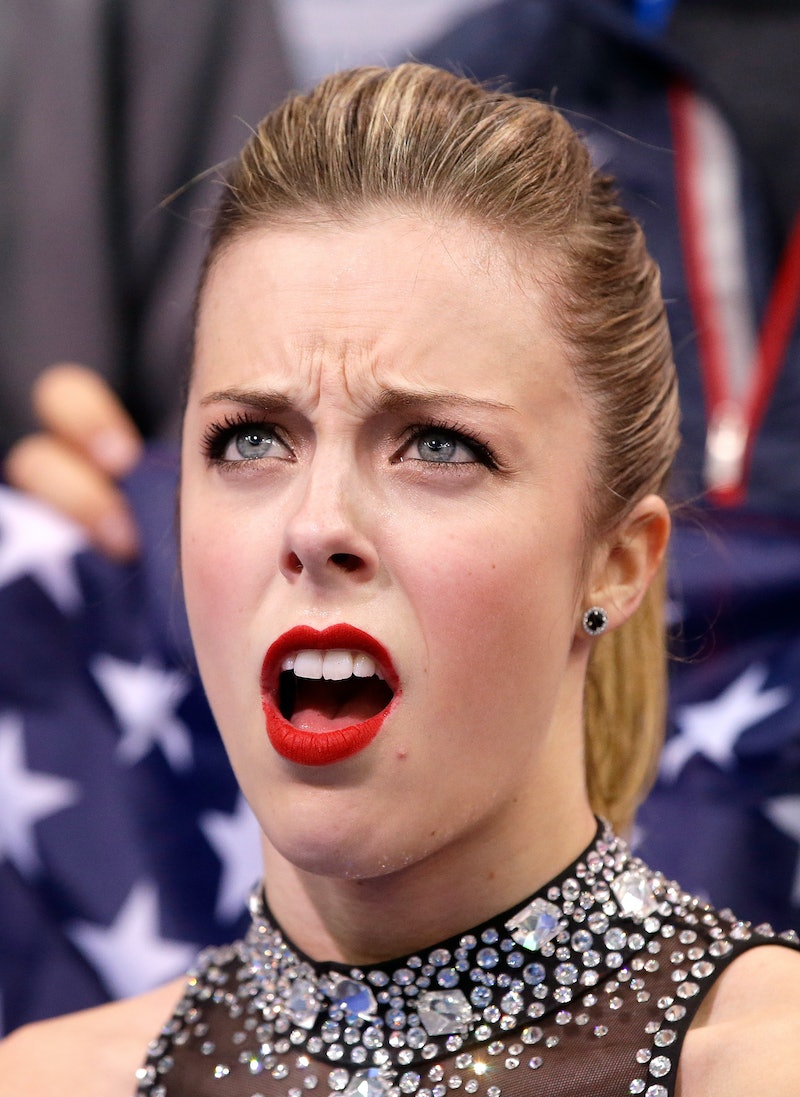 Another day, another meme. This time it's Olympic figure skater Ashley Wagner whose hilarious reaction face has been circulated widely throughout the Internet. Who can blame us? It so perfectly captures our reaction to so many things. "I'm a strong-headed person, and you can always tell how I'm feeling in that moment," Wagner said when interviewed about the picture. "At least it's not the ugliest face I've ever made." She also said she hadn't seen the extent of the circulation but heard she'd been turned into a meme. "[It's] probably the coolest thing that's ever happened to me," she said.

Wagner is already handling the whole situation really well, but once she escapes the Olympic bubble, things can get a little trickier. Fortunately these are not unchartered waters. Wagner can take some advice from the actions of fellow Olympian McKayla Maroney whose "not-impressed" face was turned into a meme after the Summer Olympics in 2012. I'm calling this trend "Olympic Meme Face Syndrome" and Maroney has demonstrated some important ways to deal with the situation. She was only 15 at the time, but handled her sudden rise to Internet fame like a total pro. So Wagner, I hope you're listening because if you're not I'm going to make this face at you.

Ashley Wagner seems to be doing so thus far, and we hope she continues because that's one of the things Maroney was really good at. "I think it's really funny," she once said of her own meme which mostly consisted of superimposing her "not impressed" face on really impressive things like man walking on the moon, and the Spice Girls performing.

2. MAKE THE FACE WHENEVER ANYONE ASKS YOU TO

And they will—a lot. But getting it out of the way good-naturedly allows you to move on with the conversation/interview in the quickest way.

3. TEACH THE FACE TO ALL YOUR FRIENDS

Reclaim your face from the media by making it an inside-joke with your buddies. "The pool's closed...we are NOT impressed" teammate Aly Raisman captioned this pic.

Because you have a freaking meme and you should celebrate that. On your tombstone there should be a picture of the meme. Or at the very least you should drag the face out every year so people are reminded of your awesomeness and the time you owned the Internet.

5. ALWAYS, ALWAYS MAKE THE FACE WITH THE PRESIDENT

And then make that shit your profile picture forever.