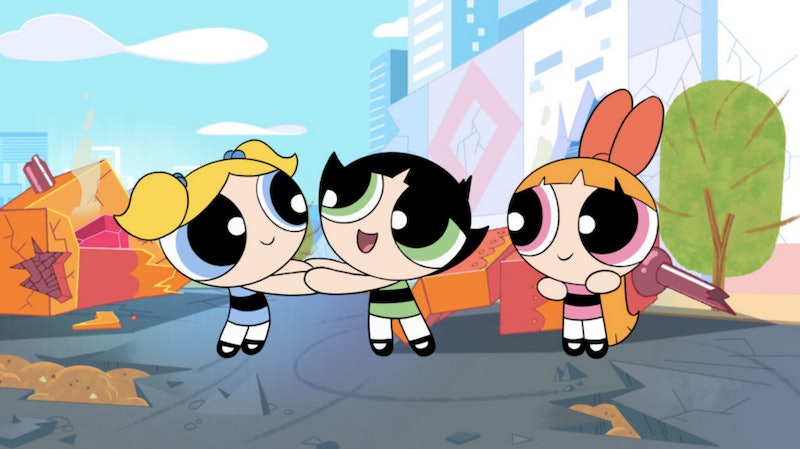 What happens when you combine sugar, spice, everything nice, and just a dash of Chemical X? Well, if you grew up in the late '90s or early '00s then you know the result of that particular combination is The Powerpuff Girls. Now, Cartoon Network is bringing back Blossom, Bubbles, and Buttercup for a revival of the beloved animated series. But if you're thinking what I'm thinking then you're probably wondering if The Powerpuff Girls will be different than the original. Don't worry Cartoon Network's new Powerpuff Girls series has the most important ingredient: animated, butt-kicking superheroines saving Townsville from evildoers.

However, the creative team behind the scenes and the voice cast aren't all that's changed about this trio of animated heroines. In an interview with Wired, Jennings said the new Powerpuff Girls will focus more on "character-driven stories" and provide social commentary along a feminist slant. (Can you hear that? Is that the sound of a bird or a plane? No, that's the sound of me cheering on The Powerpuff Girls revival!) Additionally in the interview with Wired, Jennings spoke about tailoring the revival to a new generation of viewers:

Animation in the past has generally been a white-male dominated field, but times are changing. If you’re working with just white males, it’s easy to fall into putting that type of character into the cartoon, but that’s not reflective of the world or our audience these days.

Based on what Jennings said, you can bet Cartoon Network will deliver a revival that will resonate both with kids and those of us who watched The Powerpuff Girls growing up.

So, the Cartoon Network revival of The Powerpuff Girls is definitely going to be somewhat different than the show's original run back in the late '90s and early '00s, but that's not necessarily a bad thing. A whole new generation will get to grow up with Blossom, Bubbles, and Buttercup as their role models, what could be bad about that? Plus, The Powerpuff Girls seems to be staying true to the spirit of the original series, so hopefully the differences won't take away from the enjoyment of those of us who grew up with the show. But, if you'd rather watch the original Cartoon Network series, The Powerpuff Girls is on Netflix.

More like this
'Survivor' Is Finally Coming Back To UK Screens
By El Hunt
The Best 'Grey's Anatomy' Intern Moments, From MAGIC to Glasses
By Grace Wehniainen
24 Years Ago, 'Friends' Dropped Its Most Underrated Ross & Rachel Episode
By Grace Wehniainen
Netflix Reveals First Look At Wednesday In The 'Addams Family' Spinoff Series
By Bustle Editors
Get Even More From Bustle — Sign Up For The Newsletter